Wingman Brewers to host Denizens of the Dark 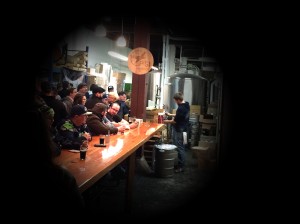 Denizens of the Dark is big and burly. If it were a beer, it would be a high-gravity hybrid of the chewiest Russian Imperial Stouts, the Fruit Roll Up of Quadrupels and the weirdest of sweet barleywines. We’d call it a Winter Imperial Double Trappist-Style Extra Stout-Strong Ale (aged in oak, of course). But it’s not a beer; it’s an annual heady festival that isn’t about getting deep-pocketed beer companies to pony up sponsorship dollars. It’s about rewarding beer lovers and promoting the craft by tapping strong, dark delicious beers.

The event, organized by Wingman Brewers close to the Tacoma Dome, offers a selection of dark, potent and complex craft beers, with beer advocates from all across the region taking notice Saturday, Nov. 21. In a short time, it’s easily one of the most anticipated beer events in the South Sound. After a few of these beers you may not care about the November weather or even read the thermometer.

Wingman created the mini festival of darkness and deliverance around the release of their Belgian Strong Dark Ale, the Stratofortress. Aged on rum soaked cedar chips, this almost black in color behemoth (11.4%) lands on the tongue with cherries, sweet malts, cedar and some spiciness. The Tacoma brewery will offer the 2015 Stratofortress on tap with plenty of bottles on hand. The same day delivery system applies to the equally strong Wingman 2015 Bourbon Barrel Aged Big Baby Flat Top Imperial Stout, with espresso and chocolate notes, baby. In addition to Team 11 percent, Wingman will also pours their other delights, a 2014 version of Big Baby Flat Top, Noel, Fudge Brownie Noel, Heavy Bevvy Scotch Ale and Pistachio P-51 Porter.

Yes, Wingman head brewer Ken Thoburn has been playing around with it. He believes it’s going to be a winner with the same fun flavors as he draws when incorporating peanuts.

Wingman has also invited a few fellow “HELLO!” winter beers — some equally dark and strong as the Stratofortress. The lineup of beers is truly dazzling, with Imperial Stouts and Belgian Quads, Strong Ales, seasonals and high-gravities on tap:

In addition to the 2015 Stratofortress and 2015 Bourbon Barrel Aged Big Baby Flat Top Bottles other bottles at Denizens of the Dark will include Wingman’s 2015 We Cran Do it Cranberry Sour and Double Mountain Brewery & Taproom’s Devil’s Kriek.

Upon entry, you’ll receive a special 2015 Denizens of the Dark glass and a pour for $7, with plenty of water on hand. Stacks Burgers will park their truck outside.

Drop by Wingman Brewers Nov. 21, and toast the impending winter months with delicious strong and dark craft beers. Tell them you’re down at https://www.facebook.com/events/466918640162731/