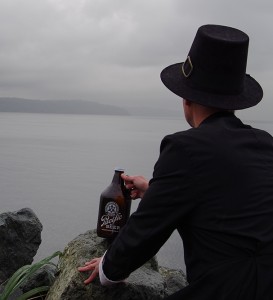 From the diary of Myles Clinkerdagger, military leader of the Ruston Way Colony, 1622:

Merry Thanksdrinking! It’s been a year since we have been separated from those tools on the Mayflower and Speedwell. Most of us cannot forgive them for not waiting for us on the docks in southwest England. Who leaves in the middle of an English Separatist Church bake sale anyway? Silly Separatists that’s who. Anyway, we couldn’t freakin’ find the Hudson River. A storm send our huge ship, Java Jive, way south. We battled storms for a year before making our way north, then through many passages and waterways to our new home at Ruston Way. Poor living conditions, a harsh winter, disease and that damn construction on the Schuster Parkway Bridge — all have taken their toll. Only a twelfth of the Java Jive’s 253 passengers remain alive. But the survivors, god save them, managed to put together a successful harvest from our co-op garden at Marine Park, and so I declared after the Schuster Parkway Bridge work completed that today would be a day of thanksdrinking.

During this celebration, we feasted upon the bounty of our harvest. Benny Bickerstaff roasted glorious turkeys stuffed with William Wonder’s bread and Christy Libertine’s spices. Quickie Hilltop prepared the vegetables. Harry Brown and J.C. Haley made the ugliest but most delicious desserts. We were joined by some of the Frost Park Chalkers, among them their great king Freitas.

We all agreed, as we gathered around our reclaimed wood tables, that our celebration was much enhanced by the ales acquired by Peter Pett. Pett bravely climbed 30th Street, battled giant octopuses, dodged potholes and survived the traffic jam of the Nisqually Delta in order to supply our feast with various ales brewed beyond Ruston Way.

Since Pett was a Certified Cicerone, he knew pairing beer on Thanksdrinking could be tricky. For starters, a turkey has both light and dark meat. There’s also usually a sweet cranberry sauce and a savory stuffing along with a veritable smorgasbord of sides, rendering the heaviness of a Porter too much, and snuffing out any flavor from light Session Ale. The optimal beer needs to be neither too bold nor timid, letting the food shine through even as the beers assert themselves.

“Totally, the East Kent Goldings balance the maltiness, giving it mellow notes of sweet citrus fruit and honey along with floral undertones. It’s not a hoppy pale ale, so it pairs well with out meal,” added Pett.

“What ale have you acquired for our second course?” Will Baker interrupted in typical fashion.

Pett’s eyes gleamed. “I have just the thing,” he said slyly, pulling a small object from his bag.

“After battling the giant octopuses, I discovered a brewery built on pilings,” explained Pett. “Narrows Brewing has a Stuff It Holiday Amber, an extra special ale brewed with 100 pounds of wild rice.”

“Don’t be empty headed, Tollefson,” replied Pett. “Not that kind of rice flavor, but rather more grassy notes. Combined with the malted barley, you can taste a nutty earthy flavor.”

Everyone kept an eye on Wild Shawn Johns, who had harvested wild yeast strains and subjected them to rigorous testing and experimentation during the voyage. He so wanted to create a deep, challenging, flavorful sour. You could see the disappointment in his eyes as we drank the ales.

“And for you, Wild Johns, I found the We Cran Do It Cranberry Sour at a place called Wingman Brewers,” said Pett. “I know you’re disappointed, but maybe this autumn sour will inspire you to keep at it. Six hundred and thirty pounds of Oregon cranberry went into this tasty sour beer. This is one cranberry serving that won’t be ignored.”

“I will continue to experiment with yeast! shouted Johns. “One day my ancestors will rule the land with their sour beers.”

The meal continued and the conversation was lively. We debated raising the minimum wage to two pence, dirt road improvements, painting a giant flower on our ship’s mast and erecting a towering spire on our community hall.

Pett interrupted our discussion of hiring a pop-economists to nurture a creative class in Ruston Way with another beer pairing. The others regarded him with curiosity as he carefully unwrapped large, decorative bottles called growlers.

“I have seen Three Magnets Brewing Co. after the traffic jam. I have tasted their Autumnal Saison. I’m here to tell you this beer is a veritable cornucopia of fruit-like smells, culminating from aromas of apples, pears, berries and stone fruit,” Pett pronounced as he raised a growler toward the sky. “Tartness is added through the addition of the barrel aged beer, sweetness from the caramelized grain and spiciness from the rye malts. Rustic and refined, this is the perfect fall refreshment.”

“Good stuff, right?” Pett asked. I nodded gratefully, though brew’s 7.8 percent alcohol by volume went straight to my head. To be honest, I could not drink more than a small glass of it. But, shared between many thirsty mouths, the drink was ambrosia.

We discussed renting a wagon for a journey south to discover more ale.

“I hear Top Rung Brewing Company in Lacey will be hosting a special Randall Nov. 25-29 featuring their award-winning My Dog Scout Stout with fresh pumpkin and spices,” encouraged Pett.

We had no idea what that meant, but exciting.

As I write this, I am still fueled by a sense of community (or, perhaps, by the beer’s substantial alcohol content). Nevertheless, I’ve determined that Thanksdrinking will become a yearly celebration, and that it will culminate in the imbibing of tasty ale.