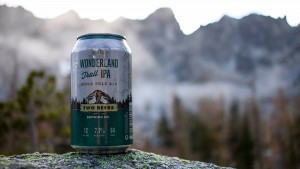 I’m almost certain Fritz Maytag didn’t find inspiration to create an English-style pale ale with American hops while hiking Mount Rainier’s Wonderland Trail. The Stanford graduate who founded Anchor Brewing in San Francisco in 1965 probably didn’t have an “ah-ha” moment to bring back almost-forgotten British technique of dry hopping while climbing out of Longmire toward the top of Rampart Ridge.

Joel VandenBrink did. Well, most likely. Let’s say he did.

The founder of Two Beers Brewing Co. and Seattle Cider Company – currently side by side in Seattle’s SoDo neighborhood – hiked the Wonderland Trail solo. He dreamed of above 80 International Bitterness Units while hiking through Mystic Camp at 5,570 feet. He believed he could push an IPA close to the alcohol by volume mark of a double IPA as he trudged along the South Mowich River. He drew inspiration mixing strong citrus flavor hops with hops boasting earthy, pine characteristics while traversing along a ridge to Devil’s Dream Camp.

Still, I secretly hoped for a Two Beers Brewing West Coast-style IPA. Actually, it wasn’t a secret after all. I was shouting it from Mount Rainier’s Sunrise Camp at 6,245 feet, extolling its virtues to anyone who would listen, tossing shiny carabiners of burning hope into karmic wishing wells. Couldn’t help it, really.

As I mentioned, it will be Two Beers first foray into the West Coast-style, a light bodied, 7.1%, 84 IBU IPA complemented by 2-Row, Vienna and Munich malts while featuring a seamless blend of Washington-grown Amarillo, Citra, Mosaic and Cascade hops. Expect a slightly sweet aroma of tangerine followed by a wave of citrus and passion fruit.

Pack a couple cans of wonderland Trail IPAs in a backpack, head for Mount Rainier, and dream.