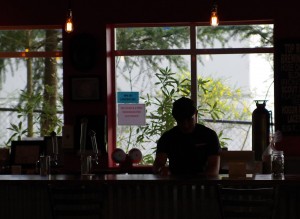 Things can get pretty freaky at Top Rung Brewing Company. And not just when their sales executive Mike Besser roams the taproom wearing a keg costume. No, the Lacey brewery’s co-founder Casey Sobol was recently freaked a bit by a mysterious knocking sound inside his brewing room.

“We recently put in service our new 20-barrel fermenter,” explains Sobol. “When I finished plumbing the tank into the glycol system for the jackets I proceeded to turn the system on, then was sidetracked by a delivery and phone call. I returned to the brewery room and heard this knocking sound.”

Sobol was the only person in the building. He checked all the doors. They were locked.

“The knocking was sporadic,” continues Sobol. “Then … I heard it from the new tank. I was perplexed. The manway was closed.”

“I opened up the manway door and was hit with super cold air. The knocking echoed again.”

Did a ghostly spirit live inside the new fermenter? Did the fermenter originate from the coldest region of the Apuseni Mountains in Transylvania, Romania?

“Ahhh … apparently there were air bubbles working their way out of the glycol jackets,” laughs Sobol. “At that moment, I remembered I had turned the jackets on.”

I regards to appropriate Top Rung beers for Halloween, Sobol suggest hanging out at the brewery’s Hops and Gouls party Saturday night as their Trashed Pumpkin Ale will run through a Randall full of ghost peppers as well as their gold medal winning My Dog Scout Stout through Whoppers candy.

“We’ll also have live music, discount for those wearing a costume, and a prize for the best costumes,” adds Sobol. “Our food truck, Paella Pro, will be serving up some awesome Paella including a black squid ink version for a ghoulish delight.”

Trashed Pumpkin infused with ghost peppers paired with black squid ink paella? Don’t “knock” it until you try it.