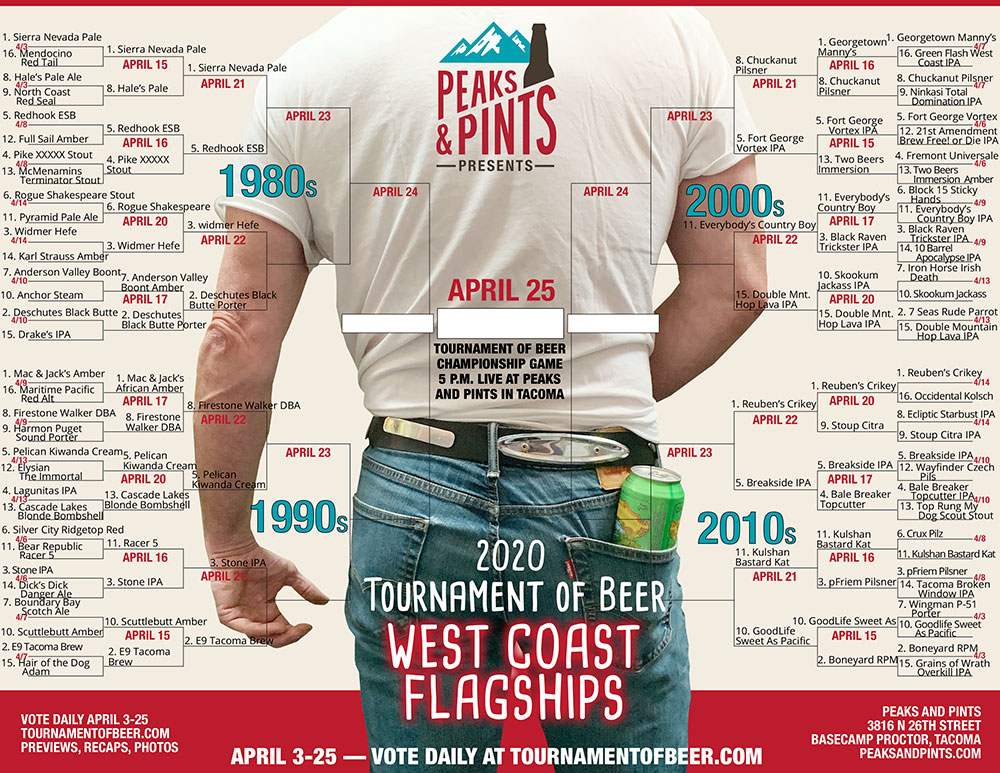 You’d be hard pressed to find a crazier two weeks of flagship beer voting than what we have witnessed during Peaks and Pints Tournament of Beer: West Coast Flagships. We discussed 1980s craft beer history, grunge, barn burners and epic failures.

Now, the Tournament of Beer moves onto the Sweet 16, and although your bracket may be in ruins, there is still plenty of great flagship beers to watch, and plenty of stories to follow.

So, read up on yesterday’s action, and then vote on the four games today. Sixteen West Coast flagships remain, folks. Let’s get down to old school business!

In a back and forth match-up pitting two fairly evenly matched competitors (at least in the eyes of the voters, it seems), Widmer Hefe was eventually able to pull ahead of Rogue Shakespeare Stout thanks to a 3 p.m. run. Hefe never looked back. When the final buzzer ranger, Hefe had 51.59 percent of the vote and a date with Deschutes Black Butter Porter in the Sweet 16.

Right now Double Mountain Brewery is considering adding another mountain to their name over the elation of beating a worthy opponent, Skookum Jackass IPA, with 62 percent of the vote. Hop Lava IPA moves into the Sweet 16 for a matchup with the IPA directly across the Columbia River from them, Everybody’s Country Boy IPA. Oh, man, that match-up it going to change lives.

In NCAA Men’s Basketball Tournament history, when a ninth seed team has battled a number one seed, the ninth emerged victorious less than 10 percent of the time. In the Tournament of Beer: West Coast Flagships, the percentage drops to zero. Number 1 seed Reuben’s Brews beat its neighbor Stoup Brewing with 60 percent of the vote. Crikey IPA moves into the Sweet 16 to battle fifth seed Breakside India Pale Ale, a match-up many would call the battle for Northwest IPA supremacy.

OK, pour a Peaks & Pints growler into your collectors Sigmund and the Sea Monsters collectors glass and let’s weed through the Magnum hops. The following are advancing to the Sweet 16:

Sierra Nevada Pale Ale continues its expected domination of the 1980s Region, the No. 1 seed easily surpassing Mendocino Red Tail. Then, Sierra Pale yelled “Oh Hale’s no! and then proclaimed Hale’s Pale American Ale extinct like a Paleozoologist. Today, it squares off with another ’80s beer, Redhook ESB. Redhook will have to use all its hooks to beat the stalwart Sierra Pale. Vote now!

Throwing down from their new brewery in Tacoma’s Historical Brewery District, E9 Brewing’s Tacoma Brew let the dogs out beating Hair of the Dog’s historic beer style Adam in the First Round. Next, it beat, basically Everett Naval Station when it sent Scuttlebutt Amber out to sea. Today, E9’s kolsch is staring Stone IPA right in the gargoyle face, ignoring the fact that Stone IPA beat Bear Republic Racer 5. If Stone’s co-founder Greg Koch creates a video for this game; it’s over. Otherwise, a Tacoma rally around the last local beer in the tournament should prove worthy.

Chuckanut Pilsner had to take a knee for a full day after its arduous win over Georgetown Manny’s Pale. The next day, after co-owner Mari gave an emotional congratulatory speech in their Bellingham brewery, Team Pilsner was back to full strength. Frankly, Fort George Vortex IPA isn’t giving much thought about game after two lopsided wins. Instead, Vortex is toying with Fort George’s 3-Way IPA Beta kegs, speaking to them only in quotes from Chandler Bing of Friends.

Both of these breweries have rabid fans and die-hard supporters, as well as solid flagship beers, so this flagship match-up may be the most hotly contested of the competition to date. Bastard Kat is a West Coast IPA with a prolific full hop flavor and aroma predicated upon citrus notes of Cascade hops. Sweet As! Pacific Ale pairs Southern hemisphere hops with white wheat for a light and drinkable wheat pale. Mobile your base, Kulshan and GoodLife, and get out the vote!