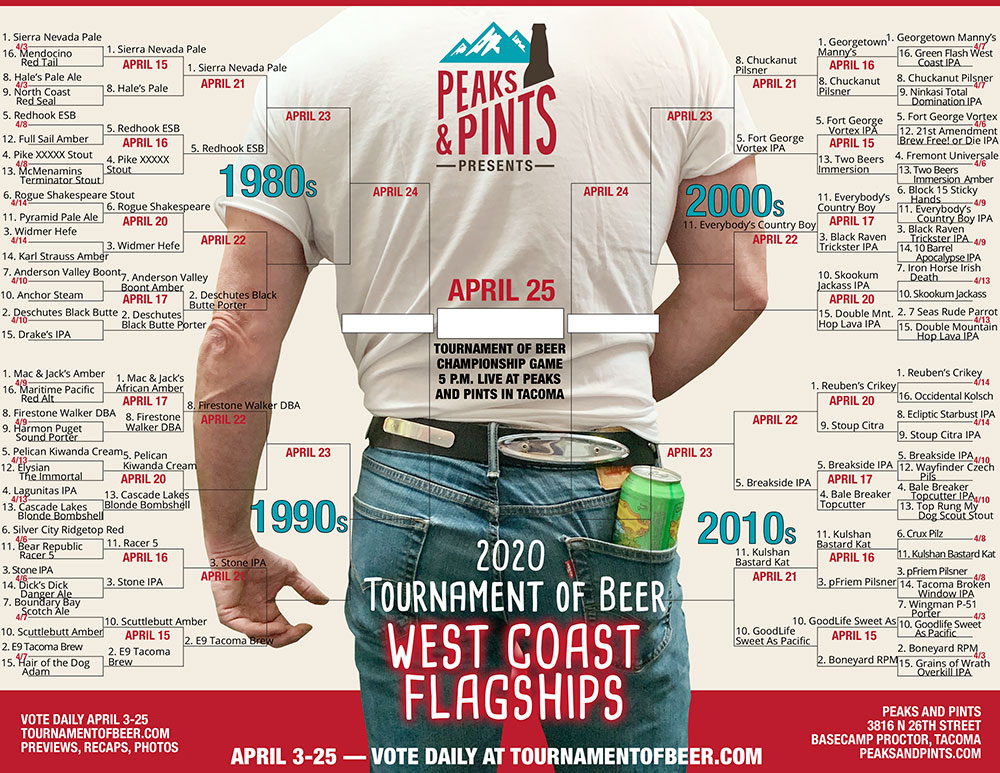 Now it’s getting exciting. The Willamette hops are really starting to fly, and the Two-row malt is getting so thick you cut it with a knife.

Today is the last day of the Peaks and Pints’ Tournament of Beer: West Coast Flagships Second Round and the competition is as hot as ever. Who will be crowned on April 25? The path to West Coast flagship greatness continues.

OK, let’s apply hand sanitizer, and dive into today’s Second Round West Coast flagship battles with a little corresponding-era music imagination, if you will. Vote for one flagship beer per game. Voting for today’s flagship battles ends at 11:45 p.m.

There’s a good chance Jack Joyce had Def Leppard’s “Pour Some Sugar On Me” vinyl spinning when he was brewing his first batch of Shakespeare Oatmeal Stout in his Ashland, Oregon basement during the late 1980s, but he probably sang “Rogue!” every time Joe Elliott sang “sugar.” The stout does, after all, have a mellow chocolate finish. Four years earlier upstate in Portland, Rob and Kurt Widmer would pretend they were David Lee Roth and Eddie Van Halen, respectively, jumping in unison while brewing their famous Hefeweizen. This game’s too close to call, as both flagship beers have had previous big wins. So, dazzle ’n’ a dazzle ’n’ a flash a little light.

In 1996, Pelican Brewmaster Darron Welch probably sang Cream’s “Sunshine Of Your Love” as he brewed his Kiwanda Cream Ale at sunny Pacific City along the Oregon Coast. It was getting near dawn when he’d start the batch, milling the CaraPils malt and measuring out the Mt. Hood hops. Three years later, across two mountain ranges, in Bend, Steve and Dave Gazeley cranked Christina Aguilera’s “Genie in a Bottle” as they brewed Blonde Bombshell Blonde Ale. The beer went on to be the brewery’s flagship, with earthy hop bitterness and slight spice. Kiwanda Cream has, by far, earned more beer awards but, as Aguilera sang, the Cascade Lakes blonde is “Waiting for someone to release me.”

In 2007, Ron and Jackie Walcher opened Skookum Brewery in rural Arlington to the angst of their neighbors. They brewed their Jackass IPA, listening to Nine In Nails’ “Survivalism.” “I got my fist/I got my plan/I got survivalism” they yelled, not knowing that they would eventually become one of the most highly regard breweries in the state. The same year, down in Hood River, Oregon, Matt Swihart and Charlie Devereaux opened Double Mountain Brewery on St. Patrick’s Day. Swihart, who knows his way around a banjo and a tune, no doubt belted out, “Beer, Beer, Beer” by The Clancy Brothers, toasting the packed house with this Hop Lava IPA. These two flagship IPAs have been ran over by their breweries’ latest and greatest, but their respected flagships definitely put the breweries on the map. This should be a fun battle.

In 2004, Adam Robbings left England for Seattle where he learned to brew from a kit his wife, Grace, gifted him. Eight years later the duo opened Reuben’s Brews, named after their son. As Robbings brewed his first IPA, Crikey, he most likely cranked English indie rock band Alt-J in the brewhouse. The band’s debut album, An Awesome Wave, was released when awesome Crikey was released. A year later, a couple blocks away from Reuben’s, Brad Benson, Lara Zahaba, and Robyn Schumacher opened Stoup Brewing. They call their Citra IPA “Sunshine In a Glass” not only because of the very bright, tangerine and Meyer lemon character, but also because Eric Clapton performed “Sunshine Of Your Love” at the 2013 Crossroads Guitar Festival. These two IPAs face off on 4/20 during a self-quarantine in Seattle’s Ballard neighborhood. How are you no going to stream the Beatles’ “Magical Mystery Tour”?