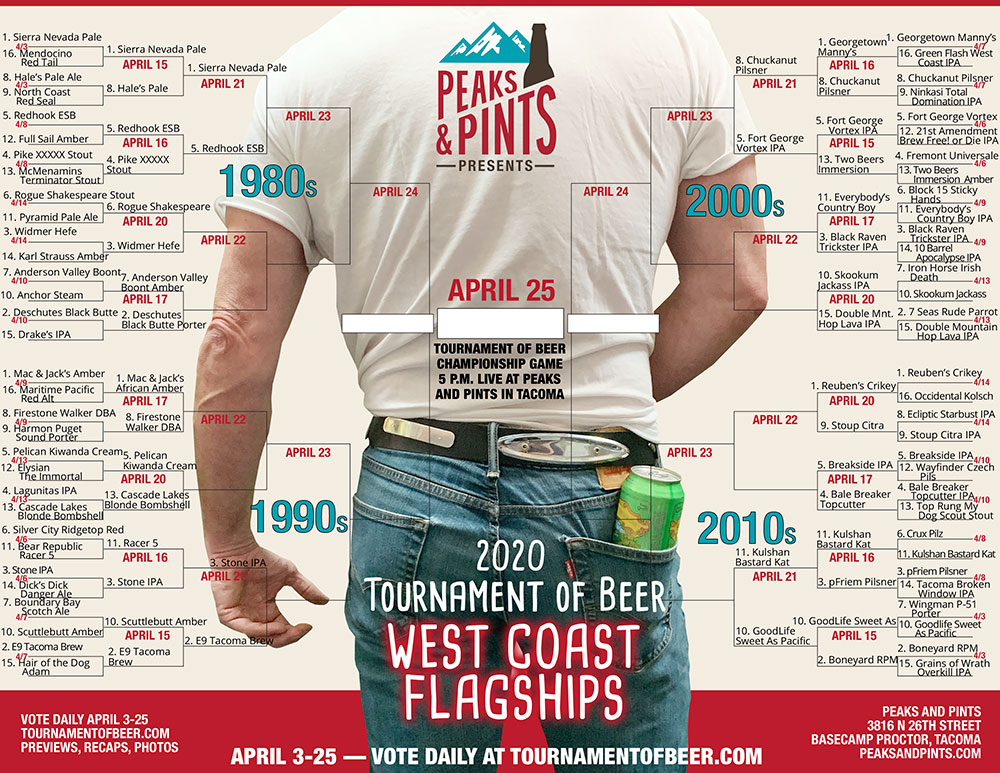 Peaks and Pints honestly had no idea how the Tournament of Beer: West Coast Flagship would pan out. Much like the actual NCAA bracket, the 64 flagship beers voted in are strikingly different. We’re seeing India Pales Ales battling cream ales, ambers facing off with Scotch ales, extra special bitters paying extra special attention to stouts. Some people have stood inside Peaks and Pints and passionately expressed dismay at the tournament seeding, even though the public seeded it. What we do know is thousands of people are voting. Very short, but lively, social-distancing conversations occur daily beneath our giant tournament bracket. And head brewers are stopping to fill growlers and wave with gloved hands. People are talking about flagship beers and drinking them!

OK, here’s a recap of yesterday’s battles, and a look at today’s Tournament of Beer action. Thanks for voting!

Honestly, poor Pike XXXXX Stout never had a chance in this one. In a day of voting that shattered all previous Tournament of Beer: West Coast Flagship records, Redhook ESB was likely the catalyst — grabbing 80 percent of the votes. Take a moment to digest that performance. If it’s a sign of things to come, old man Redhook ESB — which entered the tournament as a fifth seed — has to be the odds on favorite to win it all. Now, digest that. Crazy, man. Just crazy.

In a battle of California beer institutions, not surprisingly the institution well known for, well, everything, emerged decisively victorious — with Stone IPA cruising to victory and securing roughly 56 percent of the vote by the time things were said and done. Stone held the lead all day. Luckily for all of us, Racer 5 IPA doesn’t need the Tournament of Beer to get by … it accounts for a good chunk of Bear Republic’s sales. The high-powered Stone IPA moves on to the Sweet 16.

R-E-S-P-E-C-T is how the song goes, and that’s just what Chuckanut Pilsner has been earning so far in flagship beer tournament, knocking off Georgetown Manny’s yesterday and garnering — get this! — 65 percent of the vote. This is all the more impressive when you consider Manny’s took out Green Flash West Coast IPA just a round earlier, meaning — by the power of Tournament of Beer: West Coat Flagships deduction — Chuckanut, and its award-winning Pilsner — can claim superiority over both.

To be blunt, Kulshan’s Bastard Kat IPA did far more damage in the Tournament of Beer: West Coast Flagships than anyone here at Peaks & Pints anticipated. We know the Bellingham brewery more for its award-winning Pilsner, Tree-dimensional IPA, kickass Premium Lager, Tree-dimensiopnal IPA, Heliotrope IPA, Tree-dimensional IPA, and barleywines. Taking out Crux Pilz in the first round, and now pFriem Pilsner, is impressive to say the least. Kulshan Bastard Kat movies into the Sweet 16 with 54 percent of the vote.

OK, pour your Peaks & Pints growlers into your Squiddly Diddly collectors glass and let’s weed through the Columbus hops. The following are advancing to the Sweet 16:

OK, let’s apply hand sanitizer, and dive into today’s Second Round West Coast flagship battles (with a little corresponding-era cinematic imagination, if you will). Vote for one flagship beer per game. Voting for today’s flagship battles ends at 11:45 p.m.

In 1987, Ken Allen opened Anderson Valley Brewing Company in rural Mendocino County. He brewed out of a modest 10-barrel brewhouse located in the lower level of his original brewpub, The Buckhorn Saloon. It’s rumored that he loved to watch the latest movies movies on his Betamax while brewing what would go on to be his flagship, GABF medal winning Boont Amber Ale. “I’ll be taking these Huggies and whatever cash you got” Allen would repeat as he dumped whole cone hops into his kettle. A year later, Gary Fish opened Deschutes Brewery in downtown Bend. His brewer, John Harris, who would go on to open Ecliptic Brewing in Portland, would also rock the Betamax, but preferred outer space videotapes. “May the schwartz be with you!” Harris would blurt while dumping Chocolate malt into the mash tun. Boont Amber Ale vs. Black Butter Porter. Raising Arizona vs. Spaceballs. Watch out for the guy with a panty on his head.

1993, Mac Rankin approached Jack Schropp with the possibility of starting a microbrewery. Over the next nine months the first batches of the African Amber and Pale Ale were rolled out while newly released Dazed and Confused looped on the VHS recorder in Jack’s garage. “He Jack! Do you have the Nugget hops because you’d be a lot cooler if you did.” A couple years later, down in Paso Robles, Adam Firestone and David Walker opened their namesake brewery with an English ale, DBA — a.k.a. Double Barrel Ale. It’s rumored they wore out a Jerry McGuire videotape while brewing those early batches of DBA. “Hey Adam, do you know the human head weighs 8 pounds?” David would tease. “Hey David, do you know a bag of Maris Otter Pale weighs 50 pounds, so let me know if you need me to grab it?” Mac & Jack’s just released cans of African Amber Ale, which is huge. Firestone Walker will need to show the money to beat the Redmond brewery.

In 2009, Doug and Christine Ellenberger turn their pub in historic downtown White Salmon, Washington, into Everybody’s Brewing. They brewed their classic-styled Country Boy IPA with the flick The Hangover loaded in the DVD player. “Hey, you guys, you ready to let the dogs out?” Doug would ask his crew before shotgunning his Local Logger Lager. They let the Country Boy out, indeed, and built a beloved brewery on its big shoulders. The same year Beaux Bowman launched Black Raven Brewing with his flagship IPA, Trickster, named after the hidden 6.9% ABV. J.J. Abrams’ Star Trek reboot was in Beaux’s DVD player. “These are the voyages of Black Raven Brewing,” echoed in the Black Raven brewhouse. “Our ongoing mission: to explore strange new hops, to seek out new malt forms and new yeasts; to boldly go where no brewer has gone before, except brut IPAs.” These two old-school, citrus and piney IPAs battle today with hopefully no one losing a tooth or blowing up a spaceship.

In 2010, founder and owner Scott Lawrence followed a 10-year-old dream and opened Breakside Brewery. Much of the brewery’s success can be chalked up to Ben Edmunds, the only brewmaster Lawrence has ever employed. It was the same year Clash of the Titans streamed on Netflix. It’s rumored Breakside would yell “Release the Kraken!” while dumping their IPA’s Columbus, Citra, Centennial and Chinook hops into the kettle. Three years later, in Yakima, Meghann, Smitty, Patrick and Kevin added Bale Breaker to their family’s B.T. Loftus Ranches estate, quickly cutting their way to be one of the top craft beer producers in Washington state. When asked if their flagship Topcutter IPA was brewed with too many hops, they’d quote Spock from the newly released Star Trek Into Darkness, “The needs of the many outweigh the needs of the few.” The hop farms will be quiet today with all hop futures traders’ eyes on this game.