Peaks and Pints Pilot Program: New Hazies On The Fly

Hitting the scene in the early 2010s, the New England style India pale ale came to fame thanks to a Vermont brewery, The Alchemist, with their Heady Topper, an unfiltered double IPA that became a cult favorite. The beer was a success, and other New England breweries followed suit: namely Hill Farmstead Brewery, also in Vermont, along with Trillium Brewing Company and Tree House Brewing Co., both in Massachusetts. Call them hazy, New England or Northeast style; they’re all the rage. Even the Brewers Association recognizes the category for its competitions. Though loaded with hops, these small-batch brews tone down the bitterness by using milder varieties like Citra and Mosaic, and adding them late in the brewing process. Unfiltered, these beers are meant to be drank young and fresh. Today, Peaks and Pints offers a to-go flight of newly-released hazy IPAs that we call Peaks and Pints Pilot Program: New Hazies On The Fly.

Peaks and Pints Pilot Program: New Hazies On The Fly 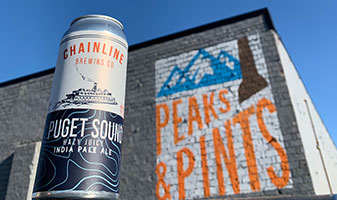 Chainline Brewing’s Puget Sound India Pale Ale was brewed solely for the Washington state ferries, offering a light, refreshing sipper while watching orcas swim by. But, these are tough times so the Redmond brewery let this hazy IPA sail into our bottle shop. Brewed with Idaho 7, El Dorado and the old-standby, Centennial, this double dry hopped juicy hazy IPA has tropical and citrus notes to take your mind elsewhere. 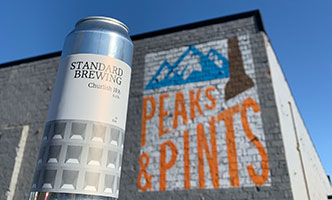 In 2013, Justin Gerardy took a big risk and opened a one-barrel brewhouse, Standard Brewing, in Seattle’s Central District, which meant long hours and no small amount of creativity went into his beers. In less than two years he moved to another Central District location and built a much bigger system. The brewery has continued to grow, and produce delicious beers of all styles, including Churlish hazy IPA. Peaks & Pints thinks Churlish is more polite than the beer’s named. Brewed with Kohatu, Simcoe, Mandarin Bavaria and Mosaic cry hops, this hazy hits the nose with subtle tropical fruit and pine aromatics, followed by a light-bodied with more tropical fruit and pine. 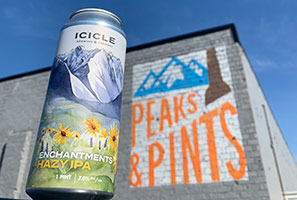 Toketie is a creek, lake and pass in Washington state’s Enchantment Lakes Wilderness. Enchantments is also a hazy IPA series by Icicle Brewing, a Leavenworth brewery on the edge of the Enchantments. Brewed with a massive amount of Galaxy, Citra, Azacca, and Simcoe hops giving it intense notes and aromas of passionfruit, citrus and peach, balanced by a hint of pine.

AleSmith Brewing’s Hopwright Series is a lineup of “innovative hop-forward beers showcases the diversity of the IPA through unique hop varietals, fun flavor combinations and perfect drinkability,” according to Hopwright hype. The first Hopwright release of 2020 is Painted Mirrors hazy IPA loaded with insane amounts of Nelson and Citra. The result is an intensely aromatic hop-bomb bursting with bright notes of citrus, mango, and berries, all balanced by a creamy, smooth finish.