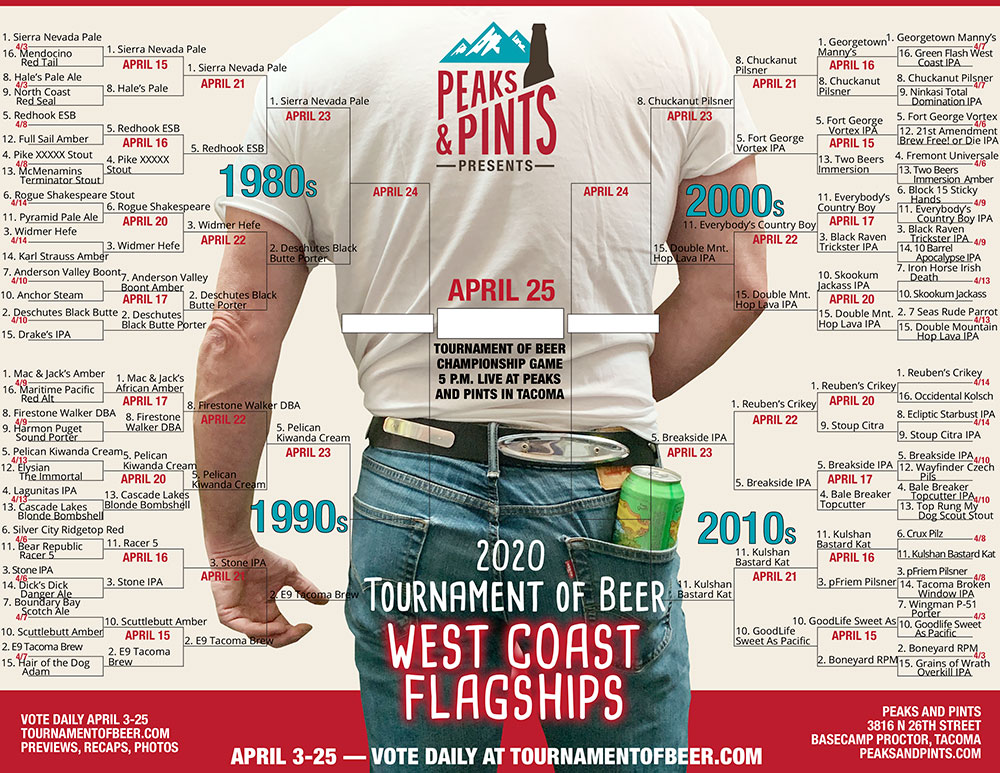 It’s all come down to eight. All the signs in the brewpubs, the mass emailings to customers and friends, the flagship phone trees have paid off for these eight meaningful craft beers. It’s now crunch(y) malt time for the flagship royalty.

Below is a recap of yesterday’s action followed by eight flagship beers hitting the court today.

In the 1980s, listening to Quarterflash and holding a vase glass of Widmer Hefe and a wedge of lemon became a thing in Portland. Peaks and Pints had plenty of lemon-wedged Hefe’s at Atwater’s on the 30th floor of the U.S. Bancorp building. It’s what we did when we visited the Rose City. Atwater’s is gone, so is the Widmer taproom, which no doubt came to play in Hefe’s lost to the almighty Deschutes Black Butter Porter. An industry standard, and one of craft beer’s most essential and faultless brews, Black Butte Porter was one of Deschutes’ original three beers when it opened as a brewpub in Bend, Oregon, in 1988. Black Butte still sells better than most porters today, and its 64 percent win over the icon Hefe doesn’t hurt Black Butte’s future.

Pre-Prohibition Cream Ale style and a seaside patio with a view of a haystack rock, giant sand dune and surfers — that’s a winning combination, at least according to vote totals in the Tournament of Beer: West Coast Flagships. Pelican’s Kiwanda Cream Ale put the hurt on Firestone Walker’s DBA with 57 percent of the vote. Number five seed Kiwanda Cream moves into the Great Eight. No hocus pocus, just focus in Pacific City, Oregon yesterday.

There weren’t any windsurfers on the Columbia River yesterday. The mountain bike trails above Hood River were empty. The growlers fills at Everybody’s Brewing and Double Mountain Brewery were fast and furious. The residents of White Salmon, Washington, and Hood River, Oregon, and that one guy in Lyle, Washington, were caught up in Tournament of Beer voting hysterics. Even the mayors of White Salmon and Hood River fought over trying to pay all the $2 tolls across the Hood River Bridge. Country Boy IPA put its big shoulders into the game, only to be smothered by Hop Lava. When the final buzzer sounded, and the wind calmed down in anticipation, Hop Lava flowed away with 52.08 percent of the vote and a spot in the Great Eight.

The Battle of IPA-5 — as someone from Chehalis called it as he saw an increase in Intertstate-5 traffic yesterday — was fierce, as expected. Seattle and Portland rivalries champion all other nearby city rivalries, except maybe Winnebago, Minnesota versus Buffalo Center, Iowa. Anyway, fifth seed Breakside India Pale Ale knocked number one seed Crikey IPA out of the tournament yesterday with 66 percent of the vote, giving Portland another notch in the win column.

OK, pour a Peaks & Pints growler into your collectors G.I. Joe glass and let’s weed through the Liberty hops. The following are advancing to the Great Eight:

Sierra Nevada Pale vs. Redhook ESB was your grandfather’s flagship beer battle. Today is a different day, obviously. Sierra Nevada Pale vs. Deschutes Black Butte Porter is your grandfather’s younger brother’s flagship beer battle. Some would call this the battle of craft beer period. Others would not. These two iconic craft beers are, obviously, different, but the respect they carry is equal. Enjoy this game. You might not ever see it again.

Obviously, E9 carries a little advantage going into this game. The Tournament of Beer World Headquarters is based in Tacoma. E9 owners John Xitco and Jeff Paradise live in Tacoma, as does Head Brewer Shane Johns, Brewer and Sales Executive Donovan Stewart and Taproom Manager Todd McLaughlin. That’s a Tacoma phone tree dream come true. On the other hand, Pelican Brewing has an Oregon coastal beer empire with facilities in Pacific City, Tillamook, Cannon Beach and now Lincoln City. If it’s kite flying and sand castle building weather along the Oregon coast, then Tacoma Brew might have a problem.

On paper, Chuckanut Brewery’s Pilsner has a medal hardware and pedigree to take this game. But, the Tournament of Beer: West Coast Flagships isn’t played on paper, it’s played on fancy phones … a thing Double Mountain doesn’t necessarily encourage in their taprooms. What Double Mountain does encourage is discussing greatest albums ever over a slice of truffle pizza and an honest brewed craft beer. If you have attended one of the Hood River brewery’s anniversary parties, you know the goodwill and community owner Matt Swihart has amassed. Bellingham also adores Chuckanut, owners Will and Mari, and the staff. This will be a heartbreaker, whichever way it goes.

As previously mentioned, Kulshan Brewing knows how the Tournament of Beer operates. They womn the Pilsner tournament last year. No doubt Kulshan owner Dave Vitt has examined the flagship beers Breakside India Pale Ale destroyed on its way to the Great Eight. Kulshan sales managers Katie Johnson and Jon Dewitt have had multiple phoners with Brand Manager Megan Bailey. Fastlane Libby, Kulshan brewdog in charge of promotions and hype, has even added her two cents. Kulshan knows what they’re up against — one of the best IPAs on the West Coast, flagship or not. Here we go. …