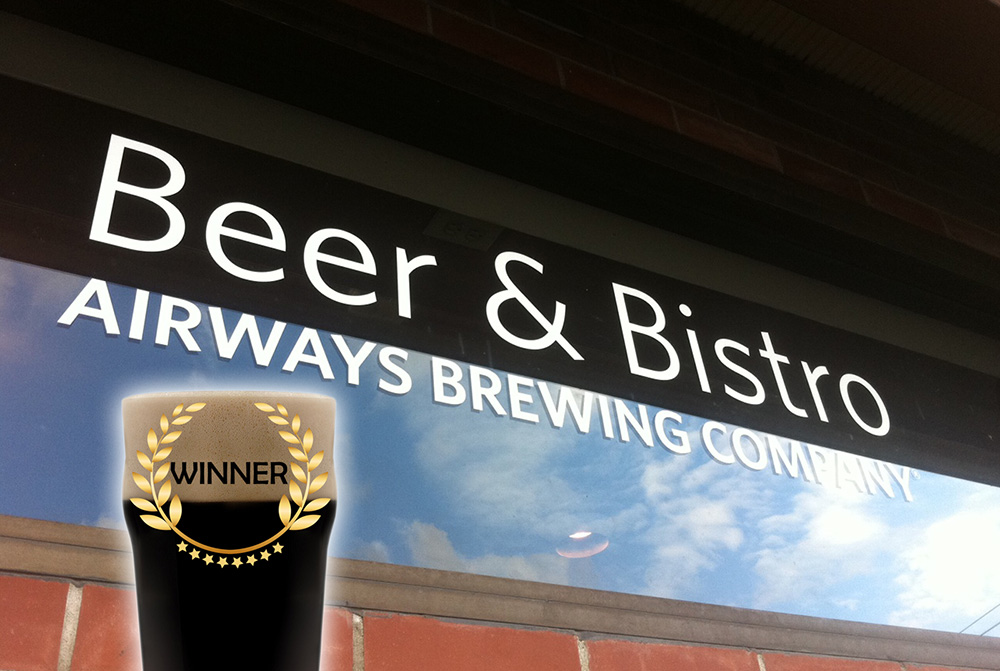 Porter might take its name from the burly deliverymen who balanced wooden kegs on their shoulders and rapped on pub doors, announcing themselves with a shout of “Porter!” It was the first mass-market beer style of the Industrial Revolution. Breweries aged the beer in immense vats that might tower more than 20 feet high and contain thousands of barrels’ worth. In 1814, the collapse of such a vessel at Henry Meux’s Horse Shoe Brewery in London unleashed a tsunami of porter that leveled the surrounding neighborhood and killed eight people.

On to happier porter times. … In March, 2018, we pulled the public asking what are the top 64 porters in the Northwest. You chimed in. Friday, April 6, we launched the Tournament of Beer: Northwest Porters, pitting your 64 porters against each other, similar to the NCAA Basketball Tournament, only with more fermentation. We’re into the third week of action, and we’re deep into the Sweet Saccharification 16.

Below is a recap of yesterday’s action followed by eight porters hitting the court today.

Airlines and software — Seattle was built on the two industries. They don’t call Seattle “The Jet City” for nothing. Western Washington has been building commercial airliners since they were invented in the early 20th century. Airways Brewing is the foray into inventive brewing of longtime Alaska Airlines employee Alex Dittmar. His beers have names unmistakably inspired by his love for big jet airliners and the industry, including Curbside Porter. Software help build Sumerian Brewing. Holly Ihrig began her stint at Microsoft before the software company went public. Ihrig retired in 2012 so she and her husband, Mark, could focus on doing something together: Sumerian Brewing Co. Yesterday, Seattle’s first big industry, airlines, landed in the winner’s circle grabbing 78 percent of the vote and a first class seat in the Ethanol 8 for Curbside Porter.

When Pat Nagle and Carole Ford opened the Harmon Brewery and Restaurant in 1997 in downtown Tacoma, Bimbo’s was still operating and the University of Washington had just opened its campus. Oh, how things have changed. Today, the Harmon brews its beers at its Harmon Tap Room in the Stadium District, with other Harmon restaurants in Gig Harbor, South Hill and soon Lewis County. That’s a lot of voting power, which was on full display yesterday as Harmon’s flagship Puget Sound Porter snagged 68 percent of the vote and a date in the Ethanol 8.

Vikings did not wear helmets with horns on them. They probably bathed and combed their hair — or at least, the archaeological record shows they were very attached to their combs. They did other things besides sail around Europe and pillage and set things on fire. And they did not call themselves Vikings: “Viking” is an Old Norse term for going on a trading trip or raid (sometimes it was hard to distinguish the two), which came to be applied to all medieval Scandinavians who showed up in places that were not Scandinavia. These are some of the things we learned while researching Mad Swede Brewing and its Viking-themed brewery. That’s not going to stop us from declaring Mad Swede’s Brynhildr Robust Porter donned a horned helmet and plundered Garden City, Idaho, capturing all the votes — before running a comb through its foam. Brynhildr Robust Porter, with 77 percent of the votes, vigorously rows into the Ethanol 8.

When you think of Rogue Ales, most people in Oregon and abroad know that they are in Newport. That’s where the vast majority of their beers are born and brewed, as well as the headquarters of the Rogue Nation. One of the pioneers in the craft brewing world (since 1988), Rogue consistently puts out award-winning beers year after year, winning gold in national and international competitions. One of the founding principals of Rogue is to remain a one-off, small-in-size but large-in-reputation unique source of creatively inspired beers, and to be local and international, all at the same time. One of the ways that they do this is their collection of affiliated pub houses and nano breweries. With all these Rogue locations, coupled with its Rogue Nation membership, the Oregon brewery reaches thousands of porter drinkers, which it did yesterday with 80 percent of the vote in the Tournament of Beer. Fifteen seed Rogue Ales Mocha Porter looks tough to beat.

Let’s weed through the malts. The following are advancing to the Ethanol 8:

Reuben’s Brews’ Robust Porter is a real contender for the crown. The porter has earned more medals than any other participating porter. It shouldn’t be a surprise, really, British-born homebrewer Adam Robbings has been on a roll since turning pro and opening his Ballard brewery six years ago. He’s earned so much hardware that he could manufacture a boat and offer Reuben’s Cruise. Two Beers’ Overhang Bourbon Imperial Porter, the booziest of the bunch, has shown a lot of fight defeating the likes of Elysian and Fremont. Ponder that for a second, and then get to voting.

This is the Top Gun of the Tournament. How this plays out is pretty straightforward: Cocky pilot Maverick (Ken Thoburn) and his wingman, Goose (Peter Brown), fly their P-51 Peanut Butter Cup Porter and match wits with fellow cocky pilot Iceman (Michael Hilborn) and constantly shirtless wingman Slider (Derrick Moyer) flying their P-51 Porter, all the while Commander Viper (Daniel Heath) walks around telling everyone he’s not going to blow sunshine up their asses. Peaks and Pints isn’t sure how this dogfight will play out, but it will most likely involve a Wingman Brewers oiled-up sandpit volleyball match.

You know that twilight hour between lunch and the end of the workday when things get … foggy? Your darkest hour. Focus begins to flutter, and you’re on the edge of falling, irretrievably, into a black hole. You face two options: You should probably get coffee, but a trip to brewpub is so much more appealing. Thankfully, Idaho is home to two delicious coffee beers, both taking the court today. Salmon River Brewing’s Buzz Buzz Coffee Porter offers light roasted malts, some coffee sweetness, mild vanilla and light herbal notes. Post Falls Brewing Big Jilm Imperial Coffee Porter is more coffee forward, backed with a bitter, roasty sweetness. Both are delicious. Both, thankfully, aren’t direct-trade, shade-grown, single-source espresso with whip. Vote! It’ll be good for your soul.

Crux Fermentation Project PCT Porter had to take a knee for a full day after giving everything it had to beat number one seed Deschutes Black Butte Porter. The next day, Crux founder and brewmaster, Larry Sidor, was back brewing his PCT Porter. He must. Pacific Crest Trail hikers depend on it, not only the smoothness combined with layers of complexity but also the porter is behind Pacific Crest Trail Association’s efforts to maintain and protect the trail for future generations as Crux donates proceeds of PCT Porter to the PCTA. R.E.S.P.E.C.T., that’s a must with Fort George Brewery. Fort George is located in what used to legitimately be “Property of the US Army, Fort George.”  Located near the water in quaint Astoria, the brewery is an enormous facility with multiple levels, outstanding pizza, a thousand brewing awards and the Working Girl Porter with a nutty flavor, slight Munich malt character, big sweet coffee and vanilla. Can Crux and its do-good porter beat a brewery known for its dark craft beer delights? The votes will tell. 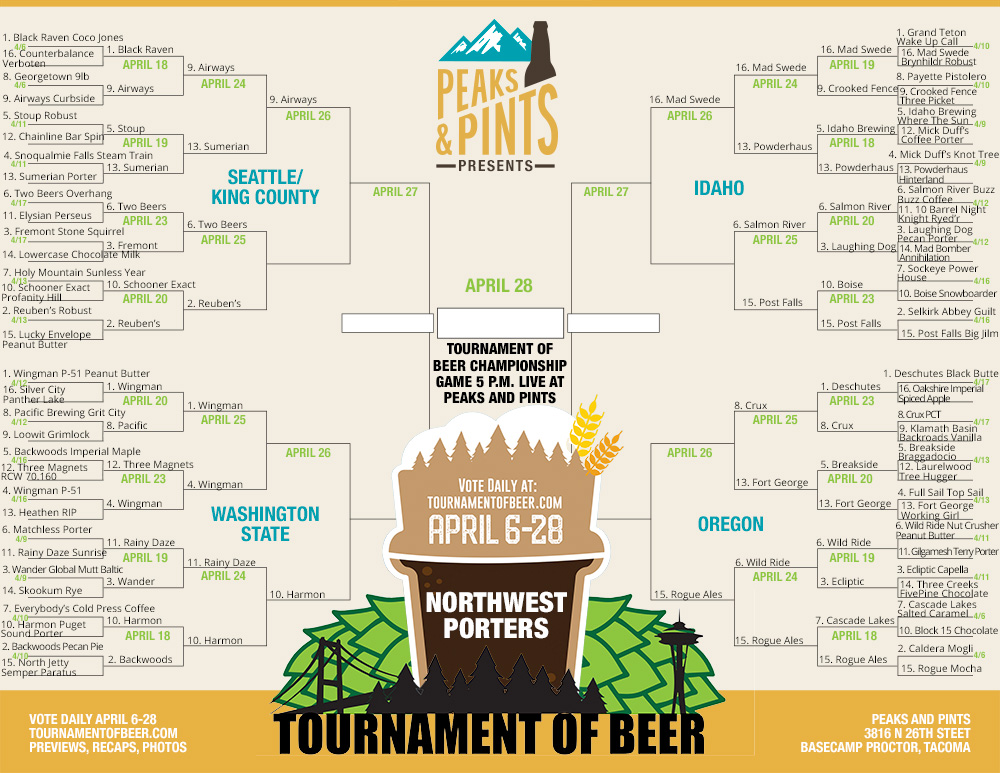