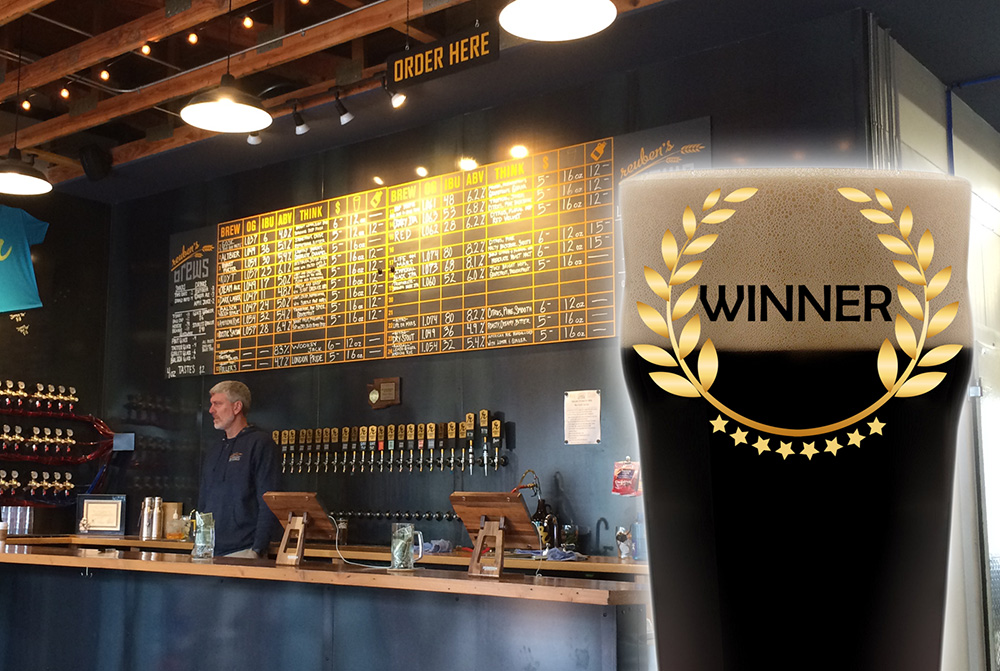 It’s all come down to eight. All the signs in the brewpubs, the mass emailings to customers and friends, the porter phone trees have paid off for these eight porter pushers. It’s now crunch(y) malt time for the porter royalty.

Below is a recap of yesterday’s action followed by eight porters hitting the court today.

As previously mention, homebrewer-turned-pro Adam Robbings developed Reuben’s Brews‘ Robust Porter recipe using British malts particular to Windsor, about 25 miles west of London, where he grew up. Eight different grains are used to create this multiple award-winning beer — in fact, the Seattle brewery’s most awarded craft beer, from Washington state, U.S. and internationally. Two Beers threw all the wood and bourbon at Reuben’s Robust Porter, but fell short in the final hours. Reuben’s Robust Porter pockets a 25-vote win margin and slips into the Ethanol Eight.

During Wingman Brewers‘ 7th Anniversary Party last weekend the conversation turned to, “What if?” The Wingman founders and brewers discussed what if both of their porters faced off. Which porter would they vote for? I didn’t matter. The Tacoma brewery’s flagship, P-51 Porter, won by more votes than the number of owners and staff at Wingman. With 65 percent of the vote, P-51 makes the Ethanol Eight.

The Buzz Buzz is gone gone. Certainly, Salmon River Brewing’s Buzz Buzz Coffee Porter will live on, and the McCall, Idaho, brewery will be all-the-buzz about its win over 10 Barrel and Laughing Dog Brewing. But, Post Falls Brewing’s Big Jilm was just too big. It posted up and pounded the pint glass all day and night. When the final buzzer buzzer sounded, a tired but proud Big Jilm walked off the brewhouse floor with 73 percent of the vote.

The way the Working Girl Porter has managed to bring it during this year’s Tournament of Beer has been nothing short of amazing. Yesterday, many already had established competitor Crux Fermentation Project’s PCT Porter penciled in as a winner. Those people, however, were foolish — as Working Girl Porter went to work, again, proving its porter prowess. The votes don’t lie, and when the final buzzer sounded Fort George’s darling had racked up roughly 78 percent of the vote and comfortably moves into Ethanol Eight competition.

Let’s weed through the malts. The following are advancing to the Ethanol Eight:

Reuben’s Brews’ Robust Porter continues its expected domination of the bracket, the number two seed easily surpassing Lucky Envelope’s tasty Peanut Butter Porter. In the Second Round, Reuben’s went expletive-to-expletive with Schooner Exact’s Profanity Hill Porter. Schooner Exact put up a good fight, but the heavily medaled Robust Porter was not to be denied. In the Sweet Saccharification 16, Reuben’s probably would have won even if Two Beers brewing changed its name to Twenty Beers Brewing. Today, the Ballard neighborhood brewery faces its toughest competition. Airways Brewing, an aviation-themed brewery, piloted by Alex Dittmar — the nicest brewer on the planet — with a freakin’ delicious porter, flew past Georgetown 9lb Porter, number one seed Black Raven Coco Jones and Sumerian Brewing to reach this game.

Well, well, well Tacoma in the house! Peaks and Pints admits we’re a bit proud two local breweries advanced from a field of 16 Washington state breweries to reach the Ethanol Eight. Wingman has brewed 253 porters in its seven-year history. Harmon has three times the history over Wingman with multiple locations. Friendships will end in Tacoma today.

Idaho has far more interesting and funny named porters in this tournament — two of them facing off today. Brynhildr vs Big Jilm. These aren’t puny named porters but rather robust. We suspect this will be a down-and-dirty, physical game that could come down to the final buzzer. All Oregon eyes will be watching. No one in Oregon wants to face these beasts in the Fermentation Four.

Sally might sell shells by the seashore, but these two breweries brew delicious porters yards away from the sea. We have no idea what that means, but we do know these two lower seed porters have nothing to lose, unless you count a permanent handle at Peaks and Pints through the summer. Coffee is at the heart of Fort George Brewery’s Working Girl Porter and Rogue Ales’ Mocha Porter. The brewery with the bigger heart could have the advantage — again we have no idea what that means. Let’s just vote. … 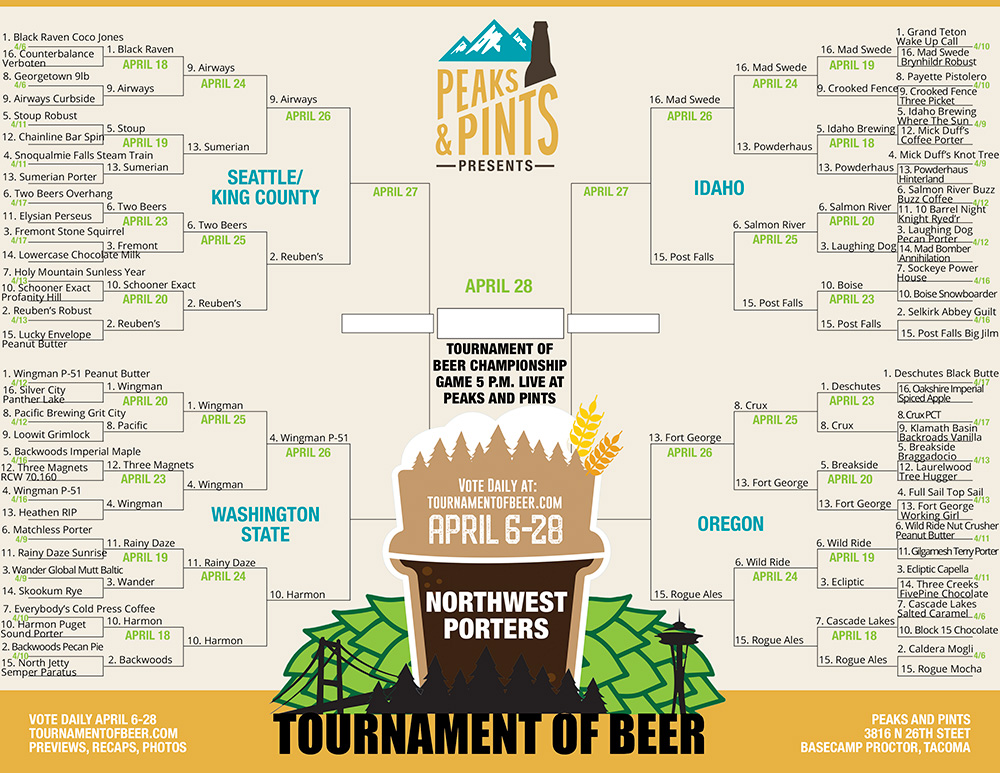