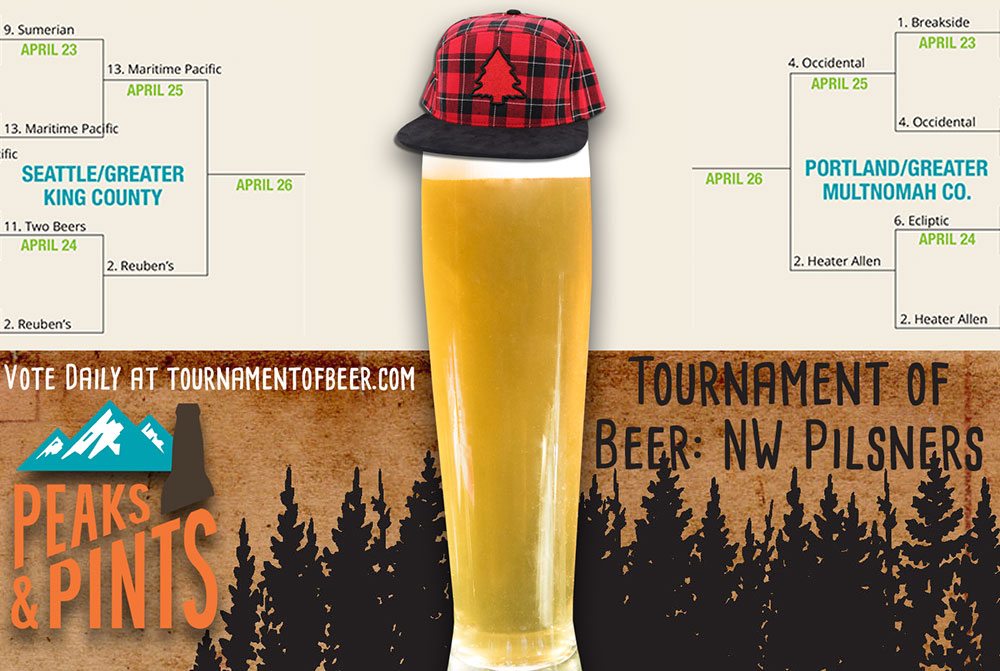 PEAKS AND PINTS WEATHER GUY: Partly cloudy day on the trail to Colchuck Lake in the Alpine Wilderness Area. High around 51. Slight chance of rain and snow tomorrow. I want to break the bar into tribes, strip the people of their titles and beer T-shirts. Distribute stamp ink and permanent markers as war paint. Stay tuned.

RON SWARNER: OK. It’s all come down to eight. All the signs in the breweries, the mass emailings to customers and friends, the pilsner phone trees have paid off for these eight Saaz slingers. It’s now do or diacetyl time for the pilsner royalty.

So, read up on yesterday’s action, and then vote on the Hot Break Eight games.

PEAKS AND PINTS WEATHER GUY: You watch. I’m going to pull my emergency conch shell I keep in my Herschel Supply Co. backpack, inform the bartenders, “This is the new law.”

RON SWARNER: You do you.

PEAKS AND PINTS WEATHER GUY: I will.

PEAKS AND PINTS WEATHER GUY: Two Beers owner Joel VandenBrink should have named his Seattle brewery Three Beers. Could have made all the difference in this tournament.

RON SWARNER: Kulshan Brewing Pilsner has to be exhausted. This is the second intense battle the Bellingham brewery had to endure to win by a slim margin. Scuttlebutt Ray of Hope Pilsner pounded them all day and all night. It’s the second time Kulshan won in the last hour of play. Kulshan’s one-two punch of Pilsner malt and hop bill of Hallertau Magnum, Hallertau Perle, Spalt Spalter is hard to beat. Sometimes, you have to go with what you know. Kulshan Pilsner moves into the Hot Break Eight with 51.31 percent of the vote for a game against Farmstrong Cold Beer Pilsner.

RON SWARNER: It’s written in the stars. Arguably the most famous brewer in the Pacific Northwest, John Harris, seems to be eclipsed by the Tournament of Beer. The man who championed the Northwest porter lost in the final rounds of last year’s Tournament of Beer: Northwest Porters. This year, behind his strong Ecliptic Spectra Hoppy Pilsner, Harris once again fell into the shadows. Yes, he’s busy collaborated with craft beer giants for his yearlong fifth anniversary series, “5 Beers for 5 Years,” but still. … We’re sure his craft beer will be nominated in next year’s Peaks and Pints Tournament of Beer, and we’re sure the region will be rooting for him and his staff. In the meantime, Heater Allen Pils is ripping up this Tournament with their exceptional Pilsner, and moves into the Hot Break Eight with 55 percent of the vote.

RON SWARNER: Josh Pfriem fell in love with craft beer and homebrewing in his junior year in college. After college, he skied and brewed beer at the Utah Brewers Cooperative, then Chuckanut. His longtime brewing experience showed during yesterday’s game against No. 5 seed Deschutes Brewery. Yes, a late-afternoon penalty for hosting a “meeting” with Hood River breweries Ferment, Double Mountain, Full Sail and Everybody’s slowed pFriem Family Brewers Pilsner down a bit, but the Hood River Brewery had just enough support from the windsurfing community to win, indeed, by one vote. One. Deschutes Brewery will forever kick themselves for not seeing the obvious and asking their favorite barista at Backporch Coffee Roasters to vote for them. pFriem Pilsner moves into the Hot Break Eight today to take on Buoy Czech Pils.

Let’s wade through the soft water. The following are advancing to the Hot Break 8:

OK, let’s do a quick liver-size check, then dive into today’s Hot Break Eight pilsner battles. Vote for one pilsner per game (one device per game). Voting for today’s pilsner battles ends at 11:45 p.m.

PEAKS AND PINTS WEATHER GUY: This is awesome, baby, with a capital “A!”

RON SWARNER: It’s the battle of the votes. Technically, all the Tournament of Beer games have been battles of the votes, but these two pilsners have garnered their fair share of lopsided vote tallies. If voters don’t engage in long, multi-scenario discussions about what these two pilsners’ mascots should look like and which one would win in a fight-to-the-death battle royal, but rather concentrate on which pilsner should be crowned the Pilsner King of Ballard, this should be the closest contest of the day. Vote now!

RON SWARNER: We’re not sure how to describe this game. Kulshan Brewing versus Farmstrong Brewing could end relationships, cause tractor title exchanges and ignite fights at the feed stores. German style versus Skagit Valley style, lively taprooms and two pilsners that are equally outstanding. Glad you’re voting and not us.

PEAKS AND PINTS WEATHER GUY: Alger, Washington sits between the two breweries just off Insterstate-5. Someone should tell the 12 people living there what the hell is going on.

PEAKS AND PINTS WEATHER GUY: This game is adorable.

RON SWARNER: Don’t stop to wonder how important your employment actually is considering you haven’t wholeheartedly worked on anything since the Tournament of Beer started. Today won’t be much different. pFriem Pilsner and Buoy Czech Pils are award-winning craft beers. Depending on your own personal criteria for what constitutes a “great game,” there’s certainly a case to be made for this game. This has the potential to be an offensive showcase the likes that hasn’t been seen in the Tournament of Beer. It’s basically German style pilsner versus Czech style pilsner. This game will no doubt be studied for years at Oregon State University’s Fermentation Science Program.

PEAKS AND PINTS WEATHER GUY: It’s going to be a beer geek convention underneath the tournament big board today. 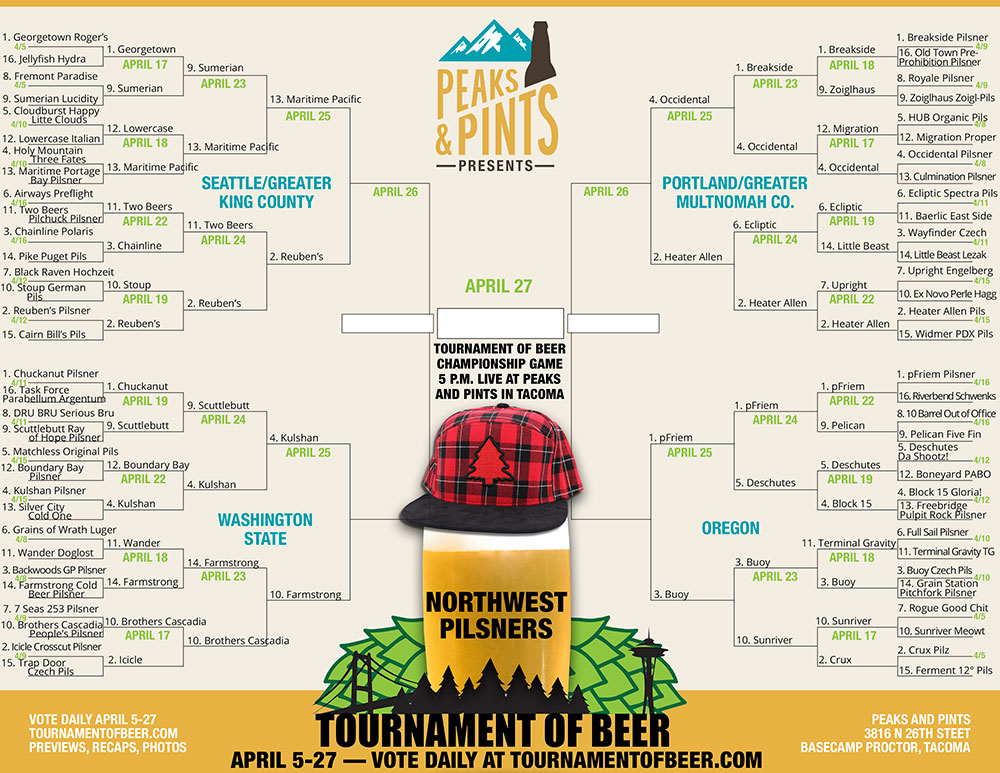