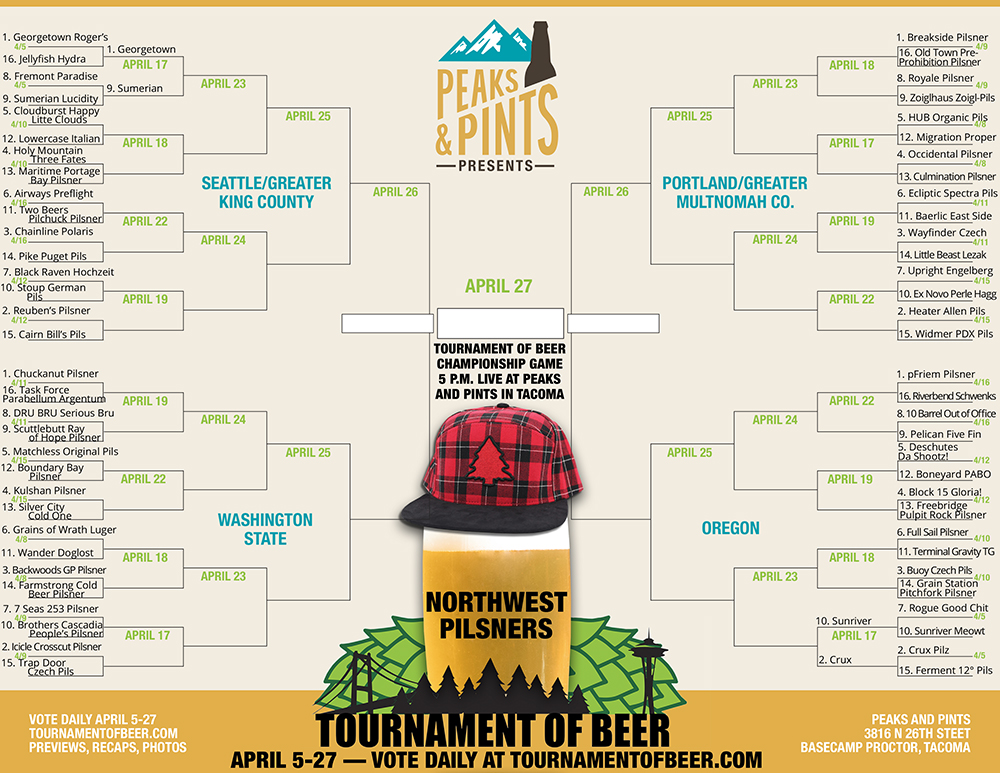 RON SWARNER: Sixty-four Washington and Oregon pilsners were picked by the public for the Tournament of Beer, which kicked off yesterday with two games in the Seattle/Greater King County region and two games in the Oregon region. Brackets don refrigerators, break rooms, brewery hallways and birdcages. Birthday parties have been moved to craft beer serving restaurants. Everyone is discussing Saaz hops and lager yeast temperaments. It’s crazy fun.

PEAKS AND PINTS WEATHER GUY: My forecast calls for snow at White Pass Ski Area with more snow through Sunday. Three inches of new has dropped in the past 24 hours. Got flustered, said “ass” (for Pass) on the Big Map. Blah, blah, blah. Bartenders pantsed me. Blah, blah blah.

RON SWARNER: Oh my. Yesterday’s opening day saw more votes than the first two years of the Tournament of Beer. Everyone loves pilsners. Plus, they’re the perfect beer to sip while planning your drinking session. The lager’s lively carbonation awakens your taste buds, and the delicate flavors of the signature pilsner malt and European hops are best enjoyed before your palate has been assaulted by massive double IPAs.

PEAKS AND PINTS WEATHER GUY: The only thing our bartenders are assaulting is me.

RON SWARNER: Without further ado, let’s take a gander at yesterday’s results. The next Tournament of Beer: Northwest Pilsners First Round action goes live at 9 a.m. Monday, April 8 right here on the Peaks and Pints website.

RON SWARNER: A First Round epic battle? Indeed. Tournament of Beer officials frantically discussed what to do in the case of a tie? Overtime? Coin flip? See which brewery could deliver a keg of their pilsner to our North Tacoma lodge the fastest?

PEAKS AND PINTS WEATHER GUY: Have them throw in a case of Peeps, too.

RON SWARNER: On paper, Roger’s Pilsner dominates Jellyfish Brewing’s Hydra Pilsner. But, the Tournament of Beer isn’t played on paper; it’s played with finger clicks. A surprisingly low scoring affair, with much of the action on defense, the first seeded Roger’s Pilsner and the 16th seeded Hydra Pilsner were in a dead heat — literally tied — going into the final hours of the competition. In the end, Georgetown Brewing squeaked out a win over its neighbor Jellyfish Brewing, securing exactly 52.11 percent of the vote.

PEAKS AND PINTS WEATHER GUY: The exhausted Georgetown neighborhood residents should go have a spa day together.

RON SWARNER: When a pilsner beats another pilsner by 90 percent of the votes, it’s called being “gypsumed” in the craft beer world. No truly, look it up. Sumerian Lucidity Pilsner gypsumed Fremont Brewing’s Paradise Peak. No surprise, really. It’s hard to beat a brewery with co-founder Holly Ihrig’s marketing savvy behind it.

PEAKS AND PINTS WEATHER GUY: I’ve heard Sumerian owners Mark and Holly Ihrig have been called the Chip and Joanna Gaines of Craft Beer. If so, maybe Mark and Holly can help me fix up my Lakewood studio apartment.

RON SWARNER: I don’t see that happening. Anyway, will Fremont’s loss stop folks from hanging out at the popular brewery’s amazing patio? Nope. Sumerian’s Lucidity Pilsner moves into the second round.

RON SWARNER: I had a feeling this might not be a close game. When I visited Sunriver Brewing’s original brewhouse in the Sunriver resort area last month, the taproom was jammed packed with folks on ski vacations — and a good portion of those people were cuddling Czech Meowt Pilsners. There’s nothing more comforting a broken leg than mild citrus notes and a slightly bitter finish.

PEAKS AND PINTS WEATHER GUY: Plus, very few people know what the hell a chit is.

RON SWARNER: Sunriver Czech Pilsner moves into the Second Round with 79 percent of the votes over Rogue’s Good Chit.

RON SWARNER: I’ll be honest. Taste wise, these two pilsner are both exceptional. Ferment Brewing is still relatively new in the craft beer world. The Hood River brewery doesn’t distribute in Washington. If Ferment did have their pilsner up here then maybe Cruz Pilz might have won with less than the 58 percent of the votes they did grab.

PEAKS AND PINTS WEATHER GUY: You’re just trying to get Ferment to bring us beer.

RON SWARNER: That’s not a bad idea. Anyway, the Cruz Pilz will face off with Sunriver’s Czech Meowt April 17. Expect skirmishes up and down Highway 97.

Let’s wade through the soft water. The following are advancing to the Second Round: