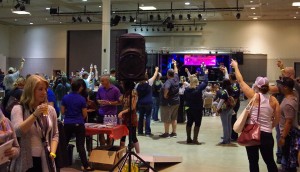 Gather ye together a large group of craft beer enthusiasts, targeted for their obsessive adoration of hoppy beers and their preference for Malt Lite and their curious taste in T-shirts, and also for their ability to drink under control and self-deprecate and laugh easily and look at each other like each was sort of crazy for his or her weird and borderline obsession with India Pale Ale. But, you know, in a good way.

Thirty Washington breweries bring their IPA, maybe two, maybe a double, even a triple. They will also bring a Pale Ale or a Stout, maybe a Porter, or a Scotch Ale. In many cases the actual brewer will be carting the beer in to the large, controlled space managed by people in yellow jackets.

And bands will show up, and shake the flimsy fencing and rattle the beer booths and peel back your skin without getting all fuzzy and distorted and annoying, loud enough that the sound they produce will easily allow for deep discussions on International Bitterness Units and gravity levels and dry hopping and beard lengths

It’s called the South Sound Craft Beer Festival. It’s a tightly directed and passionately devised gathering by the Washington Beer Commission held purely for the love and discovery of, well, craft beer. IPAs especially. But, it is not solely about IPAs. It’s about quality. It is about range. It is, perhaps more than anything else, about surprise. In some cases, the participating Washington breweries don’t bring their hit beers. Rather, they bring something new and interesting and unexpected. Maybe even an English style IPA. Probably not.

The American version of the stalwart IPA bears little resemblance to the English original. As you know, India Pale Ales had an extra dose of hops added to act as a preservative during the keg’s long voyage from the British Isles to the Jewel in the Crown. The bite contributed by the hops was an added bonus. But we Americans like to amp things up, especially in the Northwest, where our IPAs lean more toward mandarin orange and grapefruit flavors than lemon; they’re more fruity than dry, more resiny than malty. Our IPAs also have that huge, smack-you-in the-face hop aroma and flavor you don’t get as much out of East Coast IPAs, or across the Pond. It makes sense. Our breweries are closer to the hop fields of Eastern Washington, and make liberal use of classic American hop varieties such as “the 4 C’s” — Cascade, Centennial, Chinook and Columbus — and their assorted offshoots. These varieties are noted for intense resiny and citrusy flavors and aromas. Cool.

A beer festival heavy on the IPA may sound monotonous, but the beer style comes in a wide variety of flavors these days, from strong, malty, high ABV IPAs such as Silver City Brewing’s Whoop Pass and Odd Otter Brewing’s Screeching Otter to silky wheat IPAs such as Wingman Brewing’s Prop wash Summer Wheat IPA, and spicy rye IPAs like Rainy Daze Brewing’s Rainy Rye IPA. Don’t forget the dark, roasted black IPAs like the one at Narrows Brewing. These referenced South Sound-ish breweries will be at South Sound Craft Beer Festival, as well as other breweries around the state.

For the lucky 10 people still reading this overlong opening, below are the South Sound Craft Beer Festival specifics.

The WBC will host its inaugural South Sound Craft Beer Festival inside and outside the Tacoma Dome Exhibition Hall noon to 6 p.m. Saturday, Aug. 29. Technically, it’s the 2.0 version, as the WBC tested the South Sound waters last October with their South Sound IPA Festival at downtown Tacoma’s Union Station. This year’s version will have less Homeland Security and Chihuly glass, but more parking ($5), restrooms and outdoor group hugging.

“Union Station was a beautiful, historic site, but we feel it’s size restricted, says Hayden Campbell, WBC marketing manager, as well as manager of WBC’s state beer club, Washington Beer Lovers (WABL). “The Tacoma Dome Exhibition Hall allows us to move outdoors, too, for live music, food trucks and more on their plaza. The Dome has been really great to work with.”

The 21 and older, dog-free afternoon beer festival will be held in one session only, not in two sessions like last year.

Tickets are on sale now at Ticketmaster, as well as and Tacoma Dome Box Office if you don’t dig service fees. Tickets are $20 in advance, $25 at the door and $15 for military with valid ID at the gate. Designated driver admission is $5 and available at the door only (includes free water/soda). Admission includes a commemorative tasting glass and six 5-ounce tastes. Additional tokens may be purchased at $2 each or three for $5

WABL members receive two bonus tokens when they present their member passports. Not a WABL member? Drop by the WABL booth during the festival, say hi to Campbell, join the club and enjoy the WABL festival beer.

“I highly encourage WABL members and future WABL members to drop by the booth as drink this festival’s WABL beer,” says Campbell. “Rainy Daze brewing made a 9 percent ABV, 80 IBU Sitka Spruce Tip IPA. I’m glad to be close to this one all day.”