Always looking for an excuse to party, the astronomically inclined people of Earth recently enjoyed the Perseid meteor shower. In the aftermath, many folks anticipate the changing hue of the falling leaves. Others toil under the rapidly diminishing daylight, raking away said leaves. But if the only seasonally affected vegetation concerning you is the particular combination of malt and hops in your pint glass, this is the most relevant blog you’ll read, ever. Until winter. 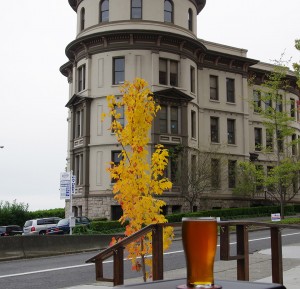 The downtown Tacoma brewery will be releasing several German-style beers to coincide with their one-year anniversary party Oct. 3, the second to last day of Oktoberfest.

“We’re doing a Doppelbock, a Bavarian Hef, and will be releasing the collaboration beer with Wingman, a Marzen-style Oktoberfest,” says Steve Navarro, Pacific Brewing co-owner and head brewer.

Pacific Brewing will also be releasing a special collaboration with a South Sound band, as well as an anniversary beer made with house-malted barley.

The Tacoma waterfront brewery next to Narrows Marina has some growing pains.

“The brewery will more than likely add some equipment in the coming months,” says Mary Asami, Narrows Brewing house manager. “Head brewer Mike Davis has his hands full keeping up with production demands for wholesale.”

Narrows recently released its seasonal Channary Imperial Red, which will be bottled Aug. 21. A second batch of their Area 13 Imperial IPA will hit their taproom Aug. 28. Another batch of their Diver Down IPA will surface the first week of September. Their Oktoberfest Lager will be released Sept. 19.

“We also have some bourbon barrels of the Cream Ale infused with vanilla that will be tapped in the coming weeks,” adds Asami.

Well into their fifth year of existence, Wingman Brewers is doubling their beer-making capacity this month. Dodging rolling tanks and coolers on wheels, Wingman Brewers brews on, with a bunch of beers on their autumn docket. In September, their Belgian Style Tripel (Miss-B-Haven) comes back out as their fall seasonal 22-ounce bottle. Their American Oak Aged Wee Heavy (Heavy Bevvy) returns this year, too. October, expect a special Fruit Sour release. November, their Noel (Belgian beer brewed with cherries and spices) and Stratofortress (Belgian Dark Strong aged on cedar planks) will be released.

“We also have a fun collaboration beer for Oktoberfest coming out on draft,” says Ken Thoburn, Wingman co-owner and head brewers. “We brewed the Marzen style lager with Pacific Brewing Company and plan to have it on draft in both our taprooms, as well as a few select Tacoma locations. The fest beer is named Baron Von Huth after the original found of Pacific Brewing Anton Huth.”

In addition, Wingman will brew a limited amount of pumpkin and other falls beers for their taproom. 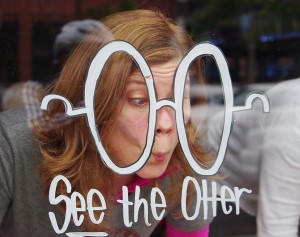 Across the Thea Foss Waterway, Odd Otter Brewing Company has come clean with their fall plans. Having opened last year in late November, Odd Otter will bust out its first Oktoberfest beer this coming fall.

Speaking of their opening, Odd Otter will celebrate their first anniversary tentatively planned for Nov. 28, releasing The Three Blind Otters, their burly barleywine aged in bourbon barrels, cognac barrels and tawny port barrels. See how you run. See how you run.

Engine House No. 9 at Sixth and Pine in Tacoma has been busy adding five new fermenters, as well as barrel blends E9 head brewer Shane Johns has conceptualized but not blended yet.

E9 will also release a new IPA called Obligation. Their Don Of Time Pale with Amarillo, Simcoe and Mosaic hops will become a full-time beer. The fresh hop Spike’s Harvest Ale, an Oktoberfest and a couple of new saisons will also be in the house. 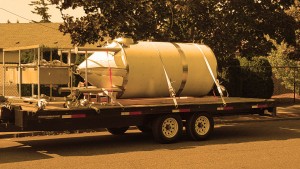 Speaking of fermenters, Top Rung Brewing Co. in Lacey just added a new 20-barrel fermenter to their brewing system. Between the new toy and launching their first bottle line this month — sending their Three Sixty Red out the door in 22-ounce bottles — founders Jason Stoltz and Casey Sobol have been scheming a Top Rung autumn.

“We’ll be releasing our Trashed Pumpkin and a new Dark Pumpkin with Rye — both with real pumpkin, but not too sweet — plus a Rye IPA and our Bourbon Imperial Stout,” says Sobol. 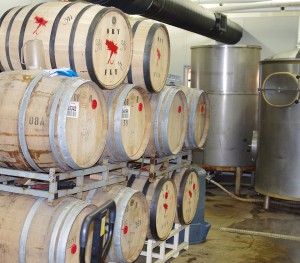 As you may have heard, Gig Harbor Brewing Company postponed their opening last week due to power issues. People with tool belts are still tinkering with electric lines inside the Nalley Valley brewery. Head brewer Bethany Carlsen says their Summer Saison, Racing Rooster Red Ale and Session IPA are ready for release when the doors finally open, although Pacific Brewing & Malting Co. has the Gig Harbor Brewing Summer Saison in their taproom.

Puyallup River Brewing is in the process of relocating their brewery, which includes a major capacity expansion. Owner and head brewer Eric Akeson says the new location will be up and running in late October, but he’s still brewing on a smaller system. He is knee deep in pumpkin right now.

Morgan Alexander over at Tacoma Brewing Co. is tinkering with his system too, when he’s not fixing broken coolers (the taproom will be open today). As you know, Tacoma Brewing doesn’t have a regular seasonal rotation, but Alexander says he’ll be putting more emphasis on maltier beers. Saturday, Tacoma Brewing hosts a Fruits of Summer Celebration, infusing their pale ales and IPAs with local fruits from the farmers market: raspberry, strawberry, black currant, blueberry, rhubarb, boysenberry — plus a grapefruit version of their Aristotle’s IPA and a Tiki Pale Ale made with Passion Fruit. 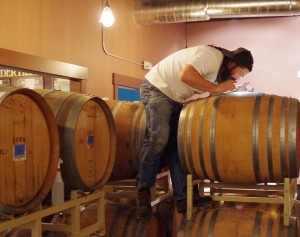 Beer, unlike wine, is made all-year round, using grain, yeast, water and hops that have been preserved. The vast majority the fall harvest’s hops are dried in kilns, but some are quickly transported to breweries for the creation of beers using wet hops, rather than stored or pelleted. Wet hops differ from dry hops in their aroma, flavor and how much bitterness they can impart. A useful analogy is the difference between fresh herbs and spices and dried ones. When you dry your hops, you get less of what originally is there.

“Wet hops are picked and are used to brew a beer the same day or as close to as possible,” says Pat Jansen, head brewer at Three Magnets Brewing Company in downtown Olympia.

Jansen and crew will release several wet hop beers this fall, incorporating the same malt bill, light in general, but supportive enough to balance the hop intensity. They will fall into the strong pale category — 5.8 percent ABV and 50 IBUs. Jansen has his eyes on several hops for his wet hop beers.

“Amarillo, as well as any other hop we can come up with to blend them with, Eldorado for example,” Jansen explains. “Citra, I would like to come up with some Chinooks as well for this beer. Mosaic, most likely blended with Citra hops, last years version of this is easily one of the best beers we have made. We are also looking to pick up some Sterling for a wet hop Pilsner as well, we’ll see.”

Three Magnets will also bring back their Autumnal Saison, a double inspired beer that drinks like a traditional Saison but with more malt character and an emphasis on the yeast derived fruit and spice.

“We plan on releasing our rum barrel aged Wreathing Havoc some time in November, in both kegs and a small number of bottles,” says Jansen. “Our bourbon barrel aged Old Skook Barleywine will be kegged off with a limited bottle run as well. We also have bourbon and port versions of both a Russian Imperial Stout and an Oatmeal Imperial Stout to be blended and released in both keg and limited bottle runs.

Jansen is also tinkering with his formulas. His lagers will focus more on German styles rather than his current Czech versions. Not only does he have a Helles style beer on the docket, but also something fest oriented and a Bock or two. His pale ale will most likely take on a British tone, something ESB-ish.

For the uninitiated, sour beers taste like the unholy union of tart fruits and funky socks in beer form. They are spectacularly delicious. They are delightfully weird. And Jansen loves them.

“You may see more beer from our sour barrel program. We have been trickling out some Barrel Aged Tart Cherry Saison lately in small quantities to a few accounts and events.”