“Nothing like a little lighting to pick up the pace,” said Win Whitaker as he rushed us up Mount Rainier on a Wednesday afternoon. I nervously laughed at the accomplished guide’s remark as a thundercloud hovered above my fellow American Lung Association Climb For Clean Air climbers and RMI Expeditions guides, buzzing our ice axes and rattling our thoughts.

The Whittaker and his team lit a fire under our butts, most likely setting a speed record for the fastest ALA Climb For Clean Air team ascent to Camp Muir.

The adrenaline rush overshadowed any irritations had at the 10,188-foot elevation encampment between the Muir Snowfield and the Cowlitz Glacier on Mount Rainier. Therefore, I dub Camp Muir as my Cool Camp.

Peaks and Pints has been surveying beer industry folks and customers on where their favorite cool camp sits, in conjunction with our Cool Camp IPA we brewed at Double Mountain Brewery in Hood River, Oregon. Double Mountain brewer Matt Coughlin and Peaks and Pints staff brewed our second anniversary house beer, Cool Camp IPA, named after Coughlin’s favorite spot to camp in the Olympic Mountains. It’s an IPA built for adventure. Dank evergreen and ripe citrus lead an adventurous crew wandering through a rainforest of pines. Discover the Cool Camp IPA backstory and recipe here.

I couldn’t pass up the opportunity to climb one of our country’s most iconic peaks in attempt to end lung disease and protect the clean air we all need. As co-owner of Peaks and Pints craft beer bar, bottle shop and restaurant in Tacoma’s Proctor District, I’ve hosted several of the Lung Association’s Climb For Clean Air educational seminars. I’ve sat back, craft beer in hand, listening to Climb For Clean Air’s Event Manager Evan Lepine describe the mountaineering training and fundraising program to eager participants whom had eye sights and Instagram accounts aimed at Mt. Rainier, Mt. Hood or Mt. Baker, which ever peak suited their fancy.

In November 2018, as Lepine waxed mountaintops and perfect packs standing before the Peaks and Pints fireplace, I slammed my hand down on the red buzzer. “I’m in!” I screamed in my head, but whispered my intentions to Lepine, “I’d like to climb Rainier with your organization.”

The climb would be new territory for me. I’ve always had a close relationship with the outdoors. I’ve scrambled and boarded plenty of the Northwest’s mid-sized peaks, but I also have a healthy fear of lung explosion. I’ve studied the mountaineering films screening on Peaks and Pints’ big screen. I thought the projected climbing scenes would be as close as I would ever come to the lightheaded, low-oxygen grandeur of scraping up against the heavens. I have exercise-induced asthma. My fundraising backers knew my condition too, yet supported the fight to end lung cancer and my adventure.

After months of weekend mountain trail hikes, Stairmaster endurance sessions and insane lunges up North 29th Street, confidence was mine as I checked into Whittaker’s Bunkhouse in Ashford, Washington June 24, 2019. My fellow Climb For Clean Air challengers, including my friend Tacoman Bryan Johnson, and I would experience a crammed, two-day mountaineering course before taking the first step toward Mt. Rainier’s summit.

Our Mt. Rainier Summit attempt was wedged between all the sunshine — our climb landed on the two worst weather days of summer. A thunderstorm wasn’t out of the question; in fact, forecasted. Whitaker and his guides sprinkled sunshine on our souls, but we knew a retreat could happen.

Spirits were good as we left a chilly Paradise Jackson Visitor Center, along the Skyline Trail through Paradise Park for our 4,800-foot climb to Camp Muir. We joked as we trekked past the spider web of trails crisscrossing the snow-covered meadows. Marmots keep watch from boulders. Clouds descended as we crossed Pebble Creek onto the Muir Snowfield. Crevasses weren’t a thing; majestic 7,385-foot McClure Rock, 9,584-foot Anvil Rock and the island of boulders called Moon Rocks were — always on our right.

Just past Anvil Rock is when the weather turned. Fast. We hustled up the Muir Snowfield to 10,080-foot Camp Muir with thunder and lighting strikes providing the soundtrack. Huddled inside the RMI bunkhouse, we spoke more with our eyes.

It wasn’t my first rodeo to Camp Muir. As I stripped down to the first layer I could picture beyond the bunkhouse door — the location of the ranger station, the bunkhouses, composting toilets and the show shelves where, on sunny days, climbers and hikers would lounge with sack lunches and Instagram. Clouds replaced 12,281-foot Mt. Adams flat-topped summit, Mt. St. Helens ragged aftermath and the Tatoosh spires. Still, it was cool. I ventured into the elements to snap the above photo with a growler of Double Mountain Cool Camp. 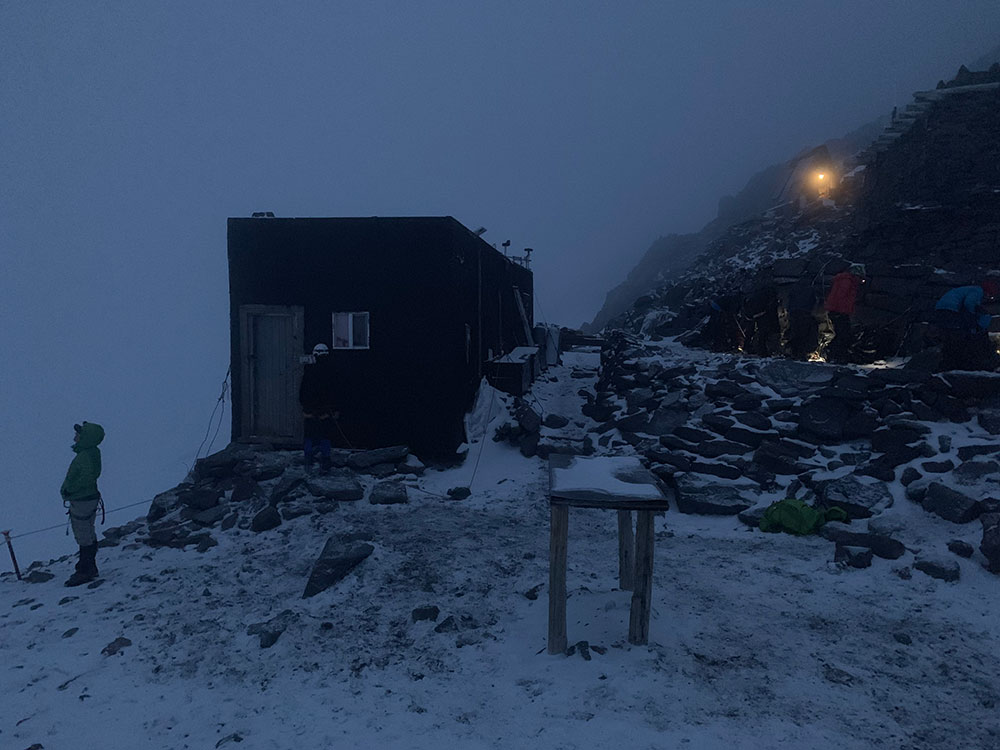 After five hours of broken sleep, Whittaker woke us at 12:25 a.m. with zero wind and 30 degrees, although it felt warmer as we raced to gear up with headlamps catching most of the controlled mayhem. We hit the Cowlitz Glacier at 1:44 a.m., climbed through Cathedral Rocks Gap, and crossed Ingraham Flats to the base of Disappointment Cleaver (elevation 11,200 feet) before visibility dropped. We sat motionless in the cold and rain before Whittaker called it. On June 20, 1981, climbers perished in an avalanche at the same spot. 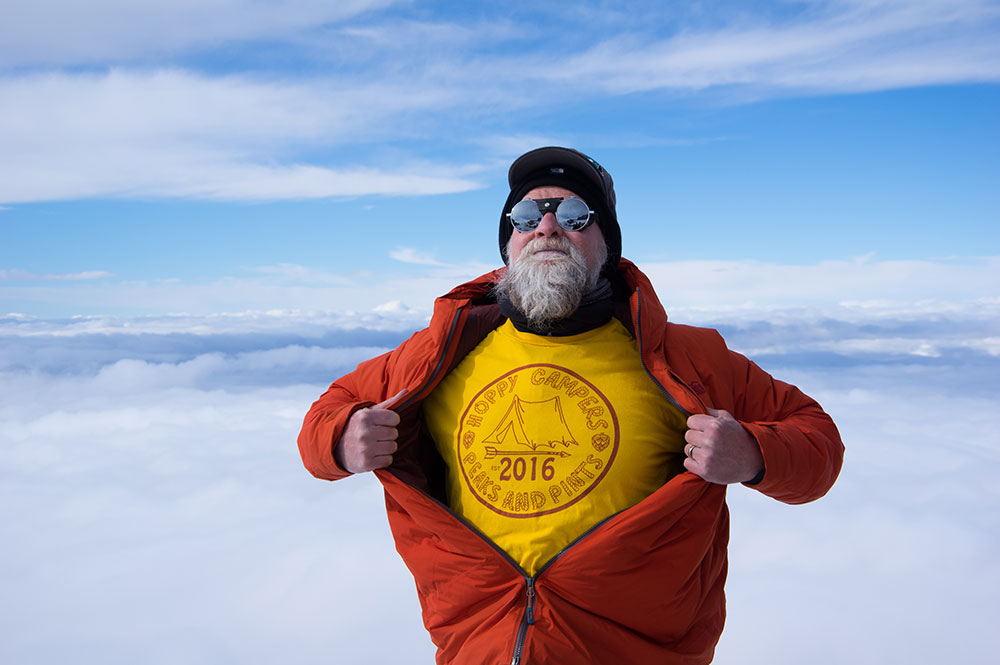 Around 9 a.m., Whittaker knocked on the bunkhouse announcing pancakes and sun, still in agreement that the right decision was made. As I shoved pancakes past my frozen beard I mentally thanked the folks who supported my journey and the Lunge Association. A huge thanks to Steph and Damon DeRosa, Tom and Chiara Montante, Phillip Eppright, Joan Swarner, Mike and Kat Bosold, Double Mountain Brewery, Jessica Schnabel and Erik Dahlin, Ginny Hicks, George and Sandy Beck, Matt and Jennifer Driscoll, Mike and Donna Shanaman, Heidi Lankett, P&M, Andrew and Beth Russo, Bill and Debbie White, Kyle Jahn and several anonymous donors. Seriously, thank you for supporting my Mt. Rainier climb with the American Lung Association. We came close, but the weather kept us from reaching the summit on that Thursday morning. I’m eager to join this amazing organization again for another summit attempt.

I’m also eager to share the last keg of Double Mountain Cool Camp IPA with everyone during the Peaks and Pints Third Anniversary Party at 6 p.m. Friday, Nov. 1. Thank you for an amazing experience Double Mountain. You’re my second favorite Cool Camp!