Rise of Fresh Hoptoberfest — They’re back! 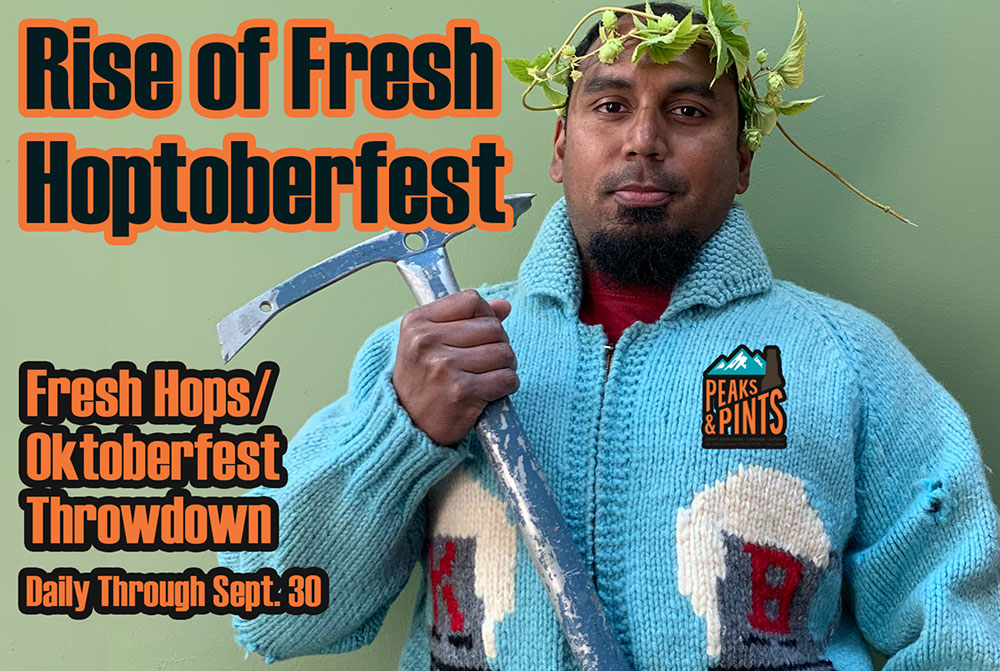 Rise of Fresh Hoptoberfest — They’re back!

If you haven’t been following the Fresh Hoptoberfest timeline, in September 2017 Peaks and Pints released The Hunt For Fresh Hoptoberfest on the masses, a month-long autumn beer party marrying up two popular seasonal beers — fresh hops and Oktoberfest. Women dressed in lederhosen. Men got fresh … hop beers. Hop farmers and malters lived together — mass hysteria! Last September, Son of Fresh Hoptoberfest not only was a worthy successor to the first fresh hop-Oktoberfest mash-up, but even better as we didn’t force our guests to listen to tuba music from open to close, screen a pictorial celebration of German culture, nor host a wet-dirndl contest. This Sept. 1-30, Peaks and Pints will, once again, offer bright, hop-hazy fresh-hop beers AND clean, hearty Oktoberfest-style lagers — this time with even more Humulus lupulus untergärig!

You see, autumn beer offers far more than nutmeg and allspice. Historically, the fall season was an important time for brewers. Before refrigeration and climate control, fermentation in warmer months was unpredictable, and brewing in the summer was more likely to yield an impure beer. In 1553, a Bavarian law was passed that banned summer beer production altogether.

Fresh hops are another great gift of the season. Most of the year, brewers coax flavor and aroma out of dried and pelleted hops. But in late summer and early fall, when the precious hop cones are plump and fragrant, many brewers experiment with fresh- (or “wet”-) hopped IPAs, pale ales and lagers. Straight from Yakima and a couple hours later into the kettle, fresh hops lend a piney, citrusy taste and delicate fizz — kind of like cooking with fresh herbs and spices instead of something that’s been on the shelf for a while. Unlike Oktoberfest styles, wet-hopped beer should be consumed as quickly as possible after brewing, as all of those delicate nuances dissipate so fast that every hour after its keg has been tapped creates essentially a new beer.

Peaks and Pints will keep fresh hops AND Oktoberfest biers on tap through September, often with a special “toberfest” theme of the day, beginning at 11 a.m.