SARAH JANE: Now it’s getting exciting. The Galaxy hops are really starting to fly, and the Munich malt bags are piling up so high you could build a Hofbräuhaus. OK, so that’s a dumb analogy. Point is: This is serious!

NICOLE: Today the Tournament of Beer: NW Double IPA officially kicks off its Second Round, meaning 32 doubles IPA brewed in Washington and Oregon remain, and the competition is as hot as ever. What Northwest double IPA will be crowned Saturday, April 24? The path to double greatness starts today.

SARAH JANE: We’ll give a recap of yesterday’s First Round battles, and then take a look at today’s Tournament of Beer action. Tuck the kids in, pour your Peaks & Pints Campfire Crowler into your Van Damme Double Trouble keepsake glass if you know what’s good for you and get to a voting.

SARAH JANE: Everyone loves a good comeback, and this may have been one of the better clutch performances in the obviously short history of the Tournament of Northwest Double IPAs. Down by a substantial margin by 4:20 p.m., Old Schoolhouse Kief Box fired up a rally and by time the final buzzer sounded the Winthrop brewery next to the Chewuch River walked away with an impressive victory, racking up 60 percent of the vote.

NICOLE: Reuben’s Brews will be fine. Even though Reuben’s is the most awarded brewery in Washington state, and are not used to losing, technically they still have their number two seeded Double Crush in the Tournament.

SARAH JANE: Sumerian Brewing “Power Couple” owners Mark and Holly Ihrig stepped aside to let their head brewer Tyson Schiffner use his 30-plus years of experience to guide Hopruption to victory with 68 percent of the vote. Well, they probably didn’t totally step aside. You know Holly was behind their social media push.

NICOLE: They’re gracious people too. Anyway, luckily for all of us, Stoup doesn’t need the Tournament of NW Double IPAs to get by … they have delicious beer and kickass merch. Hopruption moves on to Second Round action.

SARAH JANE: It would have been an upset had Silver Moon Maui Wowie managed to defeat Boneyard Hop Venom — the second largest nomination count to enter the Tournament behind Bale Breaker Bottomcutter. But, alas, it was never meant to be. Hop Venom dominated from tip-off to the final seconds yesterday, collection votes at almost a three-to-one ratio and securing 74 percent of the votes.

NICOLE: Outdoor enthusiasts and snake handlers unite — Boneyard will not be denied!

SARAH JANE: Ah, history. Deschutes Brewery is still going strong after more than 30 years in the biz and its delicious beers are the reason for their success. The Bend brewery grabbed 63 percent of the vote and moves into the Second Round to face the Snake.

NICOLE: Let’s weed through the hops. The following are advancing to the Second Round:

NICOLE: Tipping off the Second Round of the Peaks and Pints Tournament of Beer: NW Doubles IPAs we have what could be called the Tournament of Esotericism. Astral Projection and Wisdom Seeker will do battle on top of a mountain dress in colorful trailing robe koozies. Both breweries see the light and have huge followings, so rallying support won’t be an issue. The real question is: Will Holy Mountain be intimidated by the East King County brewery’s conspiracy of ravens, or will the Seattle brewery just crank the doom metal and go to work? The votes will decide.

SARAH JANE: Analysts say Holy Mountain all the way, but the Tournament of Northwest Double IPAs isn’t played by analysts. … 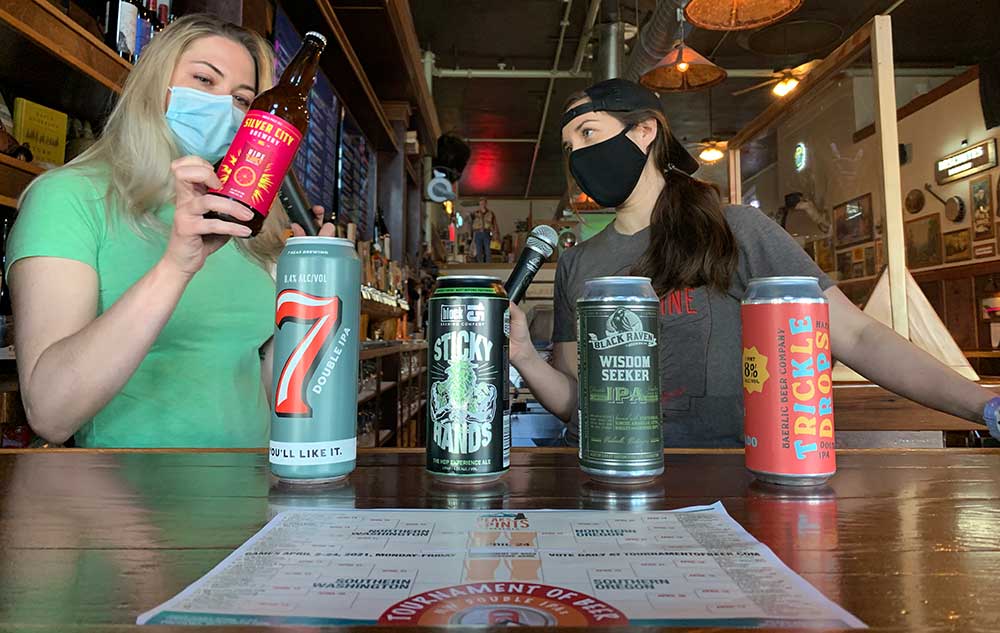 NICOLE: Ignoring the history, talent and marketing behind these two longtime breweries born on the Kitsap Peninsula, it comes down a hazy fruity double versus a clear, resiny double.

SARAH JANE: Hmmmm, I don’t think they can ignore marketing. …

NICOLE: Great Notion put hazies on the map in Portland. Of course, so did topless joints, but that’s not what’s important here. The point is: Great Notion’s Juice Box is so delicious it was known as the Heady Topper of Portland. Certainly, the fact that Great Notion Juice Box handled Culmination’s Obscured By Clouds should put all Tournament doubles on notice.

SARAH JANE: Juice Box takes on Baerlic’s Trickle Drops, a number eight seed that took out Hopworks Ace of Spades in the first round without much trouble. Trickle Drops is hazy, floral, citrusy, hoppy, and tropical with pineapple-like, grapefruity fruitiness and pithy bitterness, meaning this is a beer not afraid to punch through a wall and yell, “Oh-yeah!” I expect a knock down drag out affair with this one. 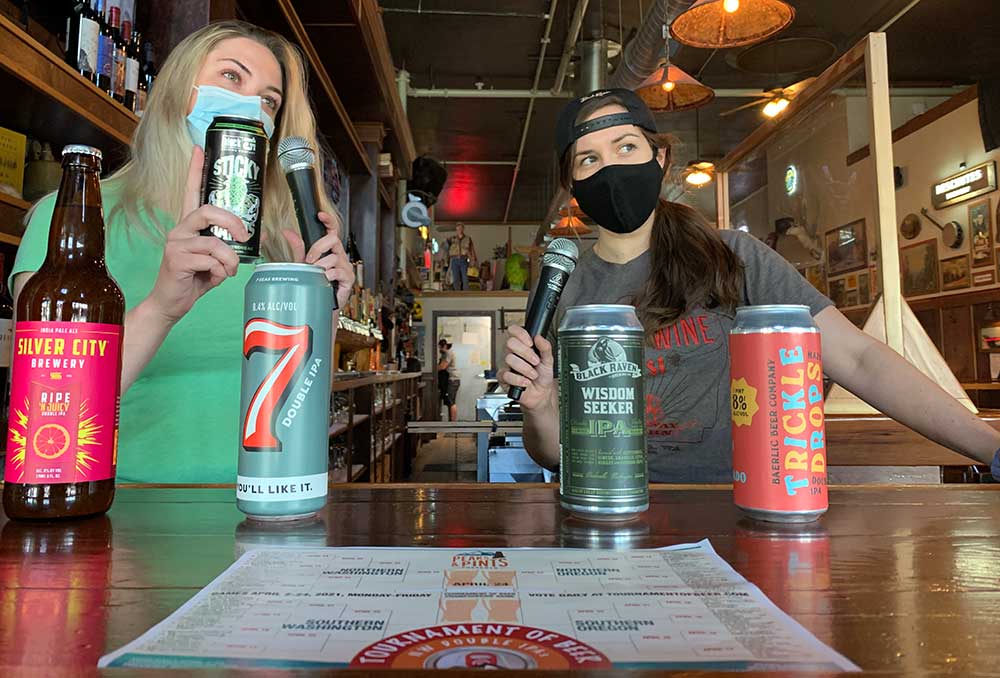 NICOLE: Sunriver Brewing, still basking in the glow of a First Round Ninkasi beatdown, will need to stay focused as Resin Nation double IPA faces Block 15 Sticky Hands. Sunriver will need to dispatch the entire Sunriver Resort, even the folks in the vacation homes drinking Opus One reds while soaking in their hot tubs.

SARAH JANE: Well, you can’t overlook the fact that Block 15 Sticky Hands is a Northwest cult favorite and Gold Medal winner of the 2020 Oregon Beer Awards. 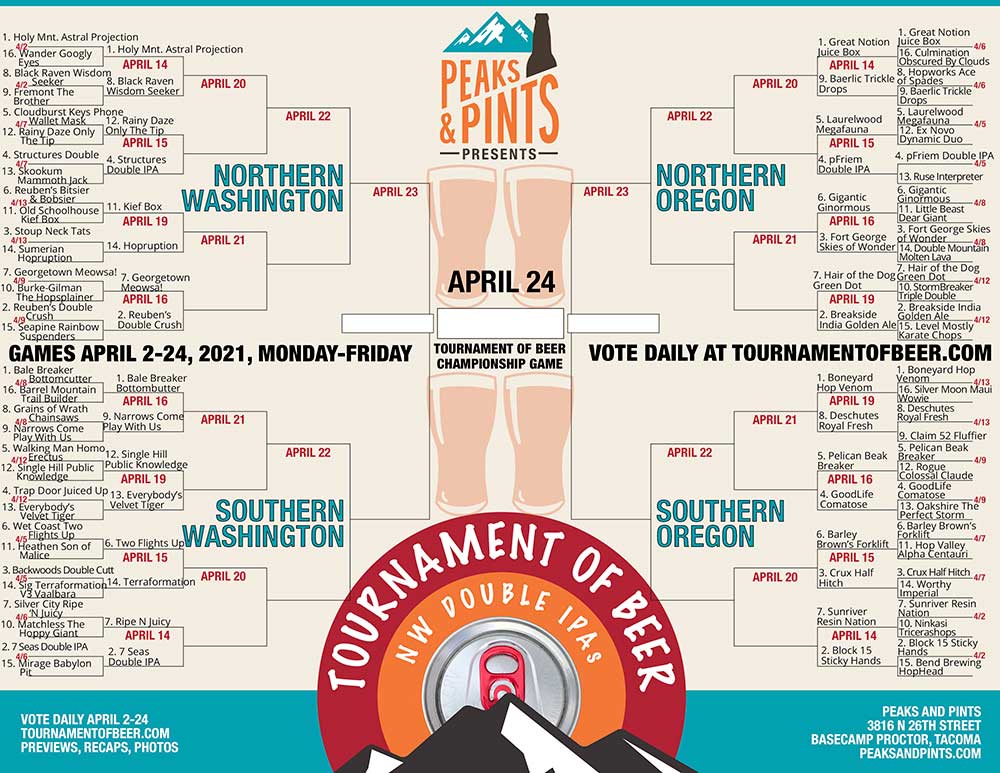