BETHANY: Hi all, I’m Peaks bartender Bethany and all the signs in the taprooms, the mass emailings to customers and friends, the beer phone trees have paid off for these eight Northwest breweries and their double IPAs. It’s now hoppy time for the double IPA royalty.

SARAH JANE: I feel bad for the School kids, and by School kids I mean all the beer-drinking students who attend Old Schoolhouse Brewery. Kief Box lost by only 13 votes. But something tells me the Winthrop brewery it’s one of the hottest breweries in the state churning out amazing IPAs along the banks of the Chewuch River. Unfortunately for Old Schoolhouse and their amazing Kief Box, the task yesterday of caging Meowsa was simply too difficult.

BETHANY: Georgetown Brewing produces the highest sales volume of beer in the state. In fact, they brew the 28th highest sales volume in the nation, according to the Brewers Association’s 2020 numbers. Plus, Meowsa is pawsibly the best thing since catnip. It’s fur real.

BETHANY: I saw the writing on the brewer’s chalkboard. Literally. Since we brew our Pop-Up Park IPA house beer at Everybody’s Brewing in White Salmon, we knew Velvet Tiger wasn’t coming back. It’s been replaced by the delicious Aggressively Relaxed, which is ironically on tap at Peaks. One hundred and 14 miles north in the Yakima Valley, Bale Breaker brews their über popular and number one seed Bottomcutter year-round. Those two factors had to come into play yesterday when Bottomcutter grabbed 67 percent of the votes. 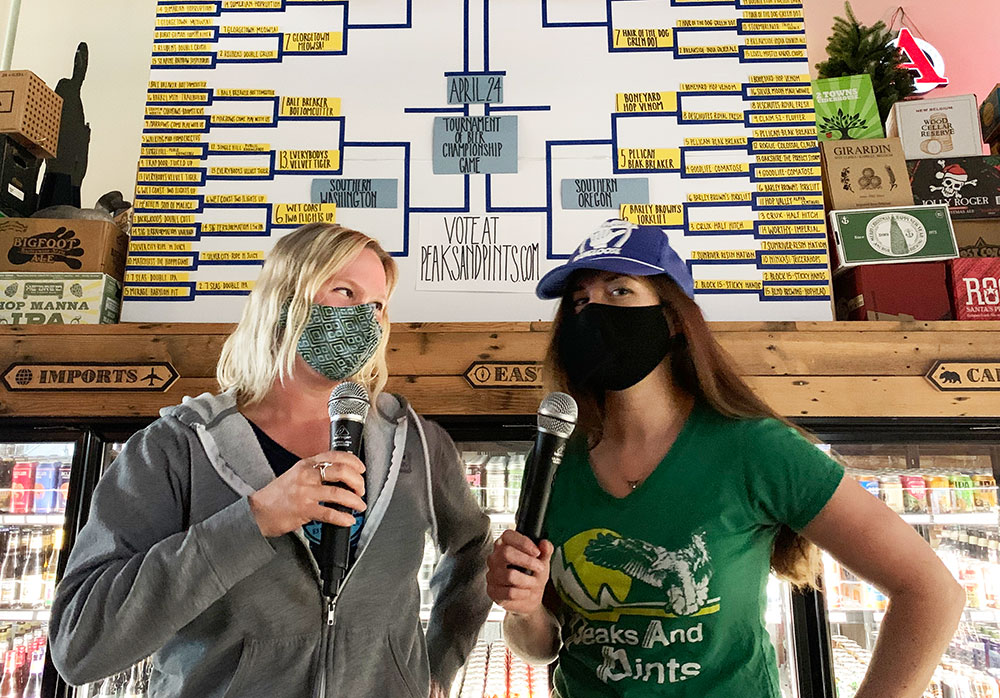 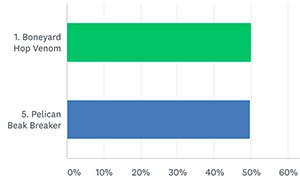 SARAH JANE: Pelican Beak Breaker near-upset of number one Boneyard Hop Venom was the thrill ride that will go down in the history books. Hop Venom’s buzzer-beating one-voter will be the highlight of Tournament of Beer montages. But it was the entire game that turned out to be an unexpected masterpiece, from the controversial over-hopping call against Boneyard to Pelican’s breaking an actual beak on a fast break.

BETHANY: What a great beer game. They battled, battled and dug as deep, I think, as they could. The one-vote win allows Boneyard Hop Venom to move into the Great Eight.

SARAH JANE: Let’s weed through the hops. The following are advancing to the Great Eight:

BETHANY: Thank you Jennifer Hudson! OK, let’s get to voting!

SARAH JANE: Holy Mountain continues their expected domination of the Northern Washington Region, the number one seed easily surpassing Googly Eyes from Wander Brewing in the First Round. In the Second Round, Astral Projection went hop to hop with Black Raven’s Wisdom Seeker before giving Wisdom Seeker some bad news. In the Sweet 16, Structures Double IPA put up a good fight, but the Seattle double IPA played out of its medium body for the win. Today, Astral Projection takes on Georgetown’s feline-themed double IPA, Meowsa.

BETHANY: Meowsa had an equally impressive road to the Great Eight. It beat Great American Beer Festival gold medalist Burke-Gilman The Hopsplainer out of the gate. Then, it batted Reuben’s Double Crush out of the Tournament. Yesterday, it squeaked by Old Schoolhouse’s Kief Box (and actually stepped on one of its squeaky toys). 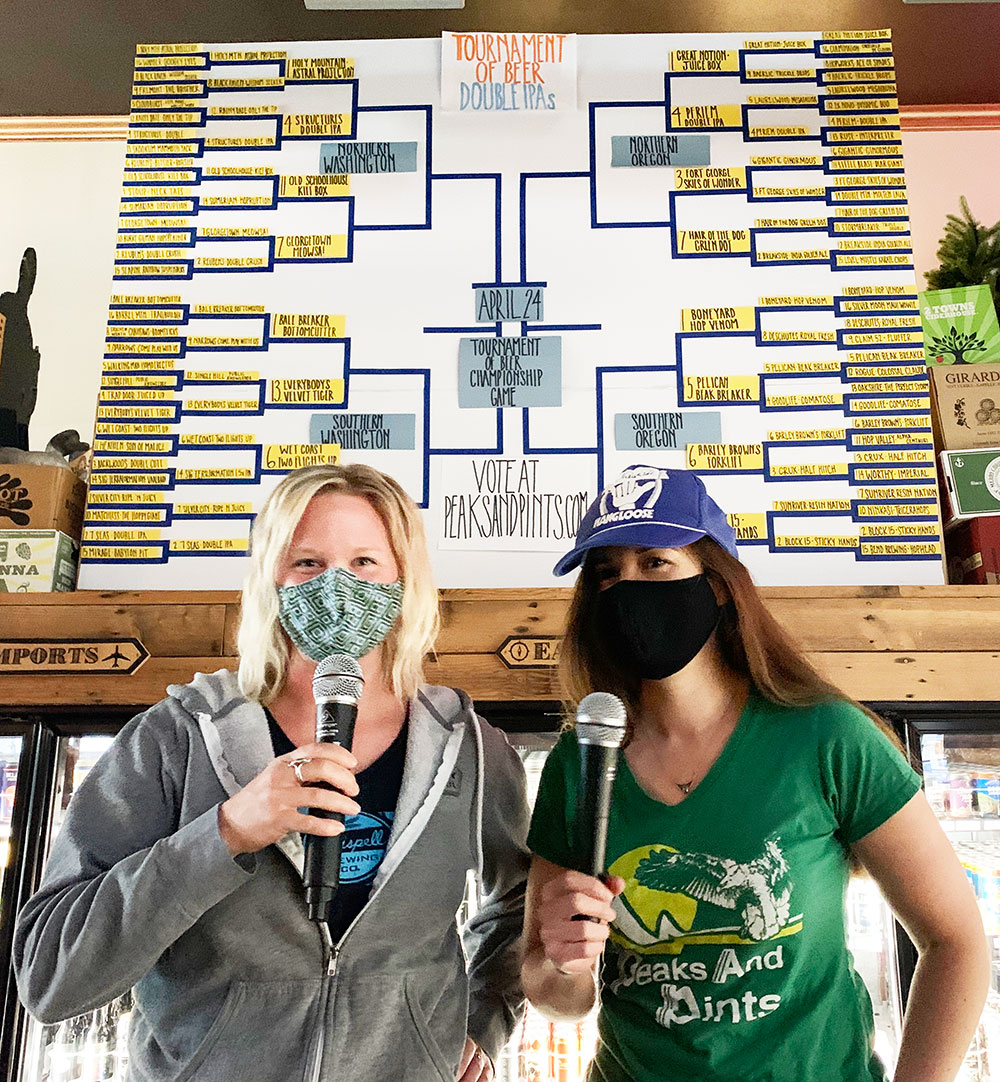 SARAH JANE: Me too! I used to tend bar at Wet Coast — so much fun! Regarding these two double IPAs, analysts could argue Bottomcutter has the edge due to availability, reach, and the fact that Bottomcutter is brewed on a hop farm. But, as stated previously, the Tournament of Beer isn’t voted by analysts, it’s voted by finger taps. Vote now!

BETHANY: Here are two of the best, and completely different double IPAs. Skies of Wonder is a hazy, fruity rotating series double. pFriem’s Double IPA is a clear, dank, and piney beer. Here we go … 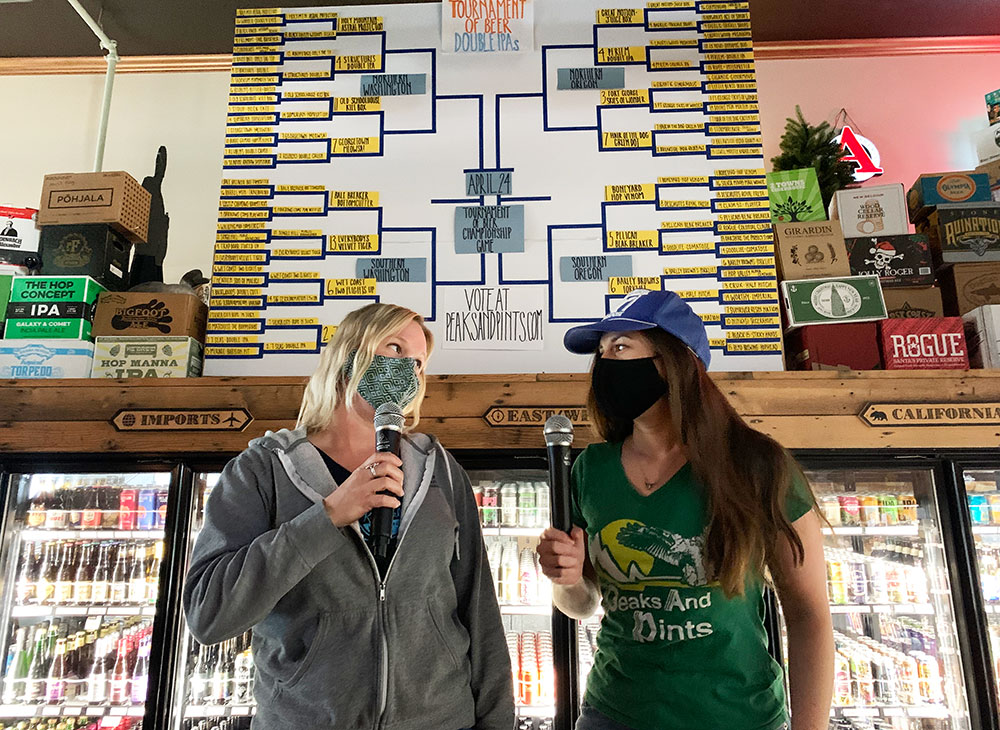 SARAH JANE: Has Block 15 Brewing’s Sticky Hands been so dominating that the bracketologists (read: citizens who seeded this thing through nominations) have started to take this double IPA for granted? How could they? Block 15’s hop experience ale features ample additions of sticky, resinous, lupulin-packed hop buds grown in the Pacific Northwest for intense hop flavor that ends with a balanced bitter finish.

SARAH JANE: The Tournament champion could arise from this game that will, do doubt, leave hop leaves scattered all over the court. 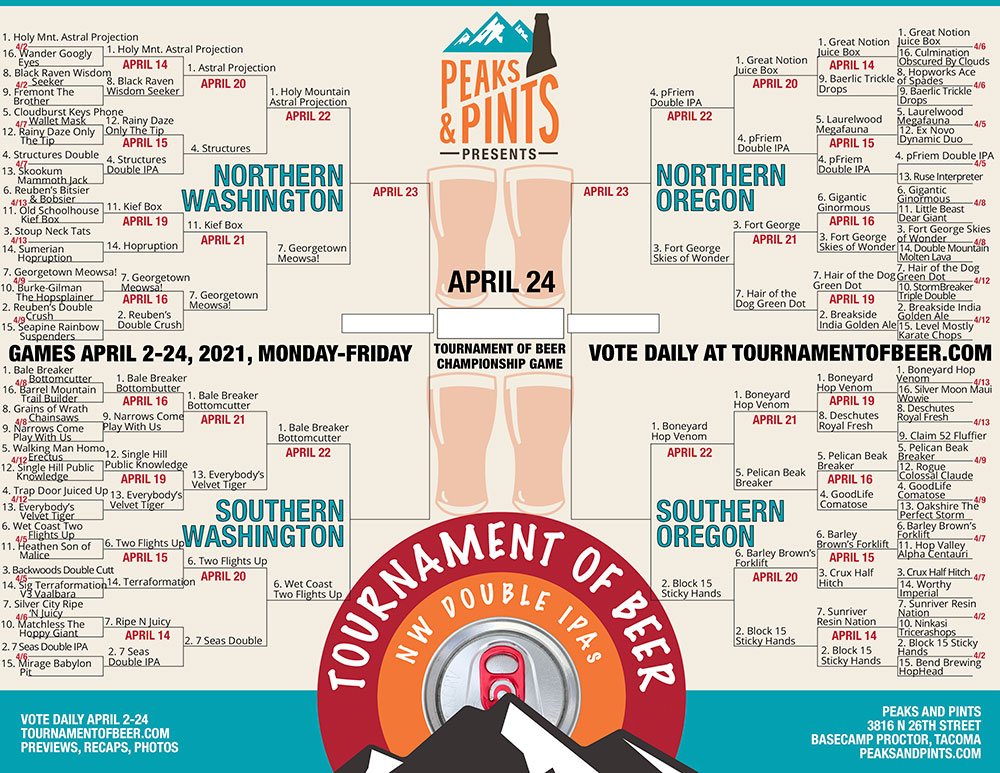