AMY KIRK: Hello Peaks & Pints Pals! I’m Peaks bartender Amy Kirk. Low and behold, today marks the closing of the Peaks and Pints Tournament of Beer: Northwest Lager First Round action. After today’s battles the bracket will officially be down to 32 Washington and Oregon brewed pale and light lagers, and brewers will start hiring cheerleaders. Honestly, if it gets any more exciting, we’ll start to understand why Dick Vitale is always yelling. If you’d rather get to the vote — VOTE NOW. 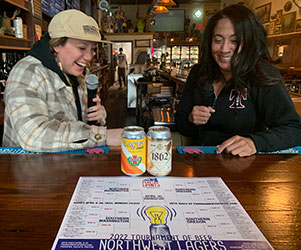 KIRK: Headless Mumby was up by 100 votes three hours into yesterday’s voting. They did that without a head too. I’m sure the Olympia chapter of the Sheet Metal Workers Local Union has something to do with that also since the beer carries their name. Then there’s the fact that they’re a lager brewery. Whatever the case, Headless Mumby Local 66 Lager advances to the Second Round after securing 90 percent of the vote.

ORTEGA: Many people need a hug these days, but April 25 will be neither the time nor place for hugs in Thurston County. 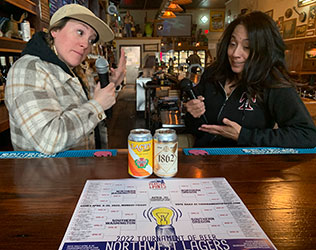 KIRK: Sharks have a week dedicated to this lager.

KIRK: The dark is afraid of this lager.

KIRK: This lager once made a weeping willow laugh.

ORTEGA: Ah, The Most Interesting Lager In the World!

KIRK: Yup, and it’s now even more interesting with 52 percent of the vote.

ORETGA: Roses stop to smell The Most Interesting Lager In The World.

KIRK: When Wayfinder Brewmaster Kevin Davey adds his Crispness® factor to a beer, then the Tournament of Beer becomes a playground for the paranoid, a Slip n’ Slide of undue fear. The kind of fear that leads to destructive decoction, too warm of ferments, Peach Pumpkin Ale quips. Brewers cling and clench instead of breathe, shrug, move through.

KIRK: The Tournament of Beer Council isn’t sure the traffic jam along East Burnside Street — the Portland road between Wayfinder and Threshold — was a result of this intense battle yesterday. What the Council does know is Number 6 grabbed 73 peercent of the vote and moves into the Second Round to take on The Most Interesting Lager In The World.

ORETGA: Does Wayfinder know the Ex Novo lager is allowed to talk about the fight club?

KIRK: Let’s wade through the chilled wort. The following are advancing to the Second Round:

>>> Ex Novo The Most Interesting Lager In The World

ORTEGA: It’s time for today’s lager battles. Please vote for one beer per game. Please only vote once. Voting for today’s four games ends at 11:45 p.m. Please join in the singing of our national anthem.

ORTEGA: Thank you Cam Anthony! OK, let’s get to voting!

KIRK: Stoupporo is a brilliant name. It should win the whole shebang on its name alone. Thankfully, Stoup doesn’t need the name to win. Co-owner Brad Benson is a legit chemist, and lead brewer Robyn Schumacher is the first woman in Washington state to become a Certified Cicerone. Honestly, they should rename the brewery “Stoupendous.” I mean, dry hopping a Japanese lager with New Zealand Wai-iti hops for peach and apricot aroma. Whoa!

ORTEGA: Stoup has big brains across the board. For instance, bartender Hayley has tutored countless kids, is a trained EMT, and managed to find time to get into medical school — all while sharing her enthusiasm for craft beer full time at Stoup.

KIRK: Founded in 1990 by George and Jane Hancock in an old transmission shop, Maritime Pacific is Ballard-proper’s oldest brewery. In those days Ballard’s nutty Scandinavians couldn’t get enough of Old Seattle Lager, which made their driving speeds even slower. Today, it’s still a light, clean, crisp lager — reminiscent of beers brewed in the early years of Seattle.

ORETGA: If George lights up a cigar today then he means business and Stoupporro won’t see tomorro.

KIRK: Kulshan grabbed gold at the 2017 Washington Beer Awards for this Premium Lager. Now a year-round offering, the canned craft beer is light and refreshing lager with just enough crispness to balance the malts perfectly. Subtle grain and light hop aroma add to this thirst-quenching beer. Made with Mount Rainer hops, its aroma is full of straw with grains and bread backing. Flavor is similar with straw, some sweet grain, and a bit of bread.

ORTEGA: The question is: Will Kulshan be able to give their full attention to this Tournament and still release what feels like three new beers a week and manage their just-open Trackside Beer Garden down by Bellingham’s waterfront?

KIRK: Oh, I love this brewery – not only for their amazing lagers, but also their first brewery sits next to Snoqualmie Pass Ski Area. I bleed Crystal Mountain, but variety, affordability, and a brewery neighbor also rock my snowboard world.

KIRK: This Mexican-style pale lager received a sombrero full of nominations for its inclusion in the Tournament of Beer: Northwest Lagers. According to Block 15, Sol Fresco “balances gentle corn sweetness, light hop bitterness, and aroma with a crisp, clean finish.” A number one seed for Sol Fresco after Block 15’s Sticky Hands won last year’s Tournament of Beer: Northwest Double IPAs is sure to give this Mexican lager a boost.

ORTEGA: Well, to add to that Amy. … Block 15 was recently named the 2022 Large Business of the Year by the Corvallis Chamber of Commerce. The award recognizes a business of 51+ employees working to contribute to economic health, business growth, employee development, community service, and customer service. 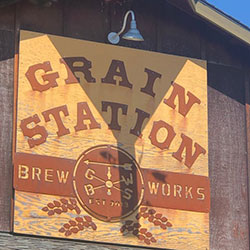 KIRK: In March, our boss Pappi Swarner drove past many a farm, ranch, and winery before arriving at Grain Station Brew in Monmouth, Oregon to drink their Haystack Gold. Their Monmouth location is an extension of the brewery’s original brewery and brewpub, which is a renovated, old timber barn in the heart of McMinnville’s Historic Granary District home. From its McMinnville patio one can see the brewery’s namesake’s grain towers that were the hub of Yamhill Valley’s industry at the turn of the 20th century. From the Monmouth location, all he could see was a Haystack Gold lager and a stack of delicious pancakes.

ORTEGA: This light American lager is a tribute to the Willamette Valley farm community.

KIRK: At this point, the Landmark Saloon is the last true country bar in Portland proper. It where people go to sidle up to the horseshoe pit before enjoying live honky-tonk. It’s also the place where Terminal Gravity Brewing staff hang when they travel to Portland. Terminal Gravity digs the country bar so much they named their American light lager after it.

ORTEGA: Landmark Lager is crushable with a hint of lemon and sourdough bread then finishing clean like a horseshoe wrapped smoothly around a stake.

KIRK: Yachats Brewing owner Nathan Bernard started Yachats Brewing as a way of having stable work near the farm he bought upriver from Yachats, a special little corner of the Oregon Coast south of Newport. Yachats, which brews a wide range of styles, including IPAs, pub styles, farmhouses and sours at its Lincoln County brewery also brews lagers such as the popular See See Lager, a full-bodied and refreshing beer.

ORTEGA: A few miles south of Yachats on U.S. 101 sits the Sea Lion Caves, the largest sea caves in the country. This two-acre stone cathedral is home hulking beasts that can grow to 2,500 pounds, and you can get a good look at them after riding the elevator down to the cave floor. 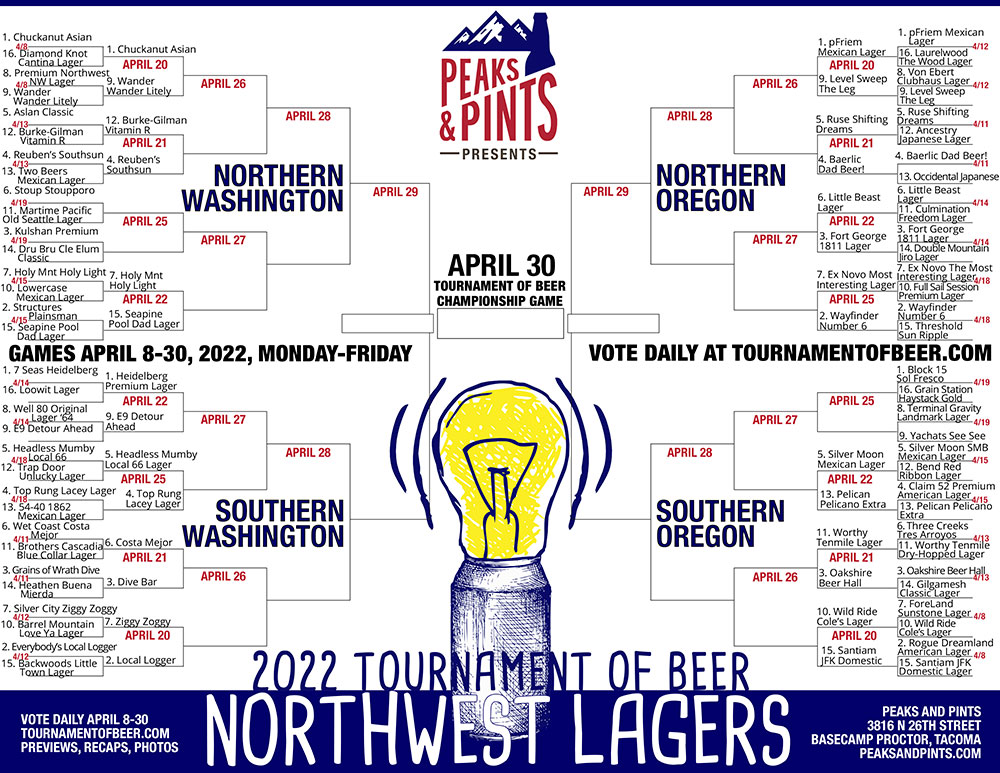