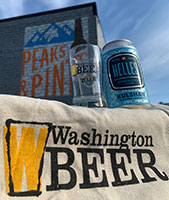 Let’s start light, in both beer and atmosphere. Kulshan Brewing sales executive Katie Johnson is pouring their award-winning Helles. She’s awesome and so is this German style helles lager. It grabbed a silver at the 2019 Washington Beer Awards, which are announced Saturday morning during the Washington Brewers Festival. Kulshan Helles has a light bready sweetness from the pilsner malt that gives it a solid backbone while the Hallertau Mittelfrüh lend herbal aroma, slight floral and herbal flavor, and spicy dryness. Overall, it’s nicely balanced, flavorful, clean and crisp. 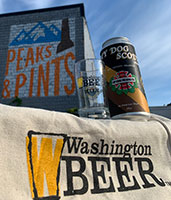 There’s Top Rung Head Brewer Jason Stoltz pouring his dog into a taster glass. My Dog Scout Stout is named after Stoltz’ black lab, Scout. This puppy grabbed gold in the American Stout category of the 2015, 2017 and 2019 Washington Beer Awards. “I think the My Dog Scout Stout took a gold medal home because of some of the choices in malt selection giving it a few different layers of flavor ending on the base malt used,” says Stoltz. “Also, our water allows us to brew darker beers very well.” Chocolate and coffee jump out of the glass. Deceptively smooth and black as the night, My Dog Scout Stout is an easy sipper due to the eight different malts used in the brewing process. 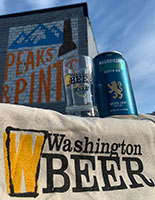 Silver City Sales Executive Jordan Marsh is performing magic tricks as he pours his brewery’s Magnificent Bastard Scotch Ale, which grabbed gold last year at the Washington Beer Awards. Formerly known as Fat Scotch, Magnificent Bastard Scotch Ale hits the nose with a bit of peaty smokiness. Expect a subdued first sip with a hint of sweet malt followed by long, smoky, sweet aftertaste and finish from this beer. Hey! Wait a minute! You made my beer disappear Jordan! 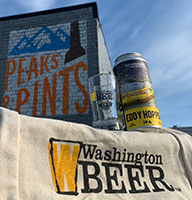 Casey and Laura Ruud purchased the floundering Winthrop brewery in 2008, changed the name to Old Schoolhouse Brewery, cleaned it up, and quickly turned it into an award-winning gem of a brewpub. Nate and Jacob Young, and their buddy Troy Anderson — longtime fans of the brewery — bought it with the intent of keeping it awesome. Co-owner and General Manager Jacob is behind his booth pouring Eddy Hopper hazy IPA, which grabbed gold at the 2019 Washington Beer Awards. Brewed with Mosaic, Citra, Simcoe, and NZ Southern Cross, this Old Schoolhouse Brewery IPA takes the nose to the tropics — specifically pineapple land. Orange dominates the flavor with mild bitterness and a semi-dry finish.