Peaks and Pints Pilot Program: ThankspFrieming On The Fly

Seattle native Josh Pfriem began homebrewing while at Western Washington University in his early 20s then moved to Utah for the ski bum experience. He worked at Utah Brewers Cooperative for a few years before moving back to his old college town of Bellingham to brew at Chuckanut Brewery, where he helped win the Great American Beer Festival Small Brewpub of the Year in 2009. He moved to Hood River, Oregon, to work at Full Sail but left in December 2011 to open pFriem Family Brewers — across the highway from Full Sail along the banks of the Columbia River — in August 2012. The brewery prides itself on its strong family focus and community involvement, as well as its ingredients — while many craft brewery websites list the notable spices and hops used in their brews, none we’ve encountered boast the encyclopedic cataloging of every ingredient the way pFriem does. Today, Peaks & Pints presents a to-go flight of pFriem craft beer for Thanksgiving — a flight we call Peaks and Pints Pilot Program: ThankspFrieming On The Fly. 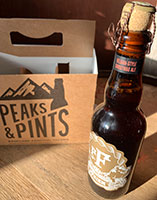 Peaks and Pints Pilot Program: ThankspFrieming On The Fly

pFriem Belgian Christmas Ale changes from moment to moment. This big dubbel-based holiday ale is brewed with German Perle hops, candi sugar, coriander and Belgian ale yeast that changes flavor with every sip. Just as you think it’s a toffee delight it morphs into chocolate-covered orange. Then raisin. And cinnamon pastry. Oh, and dried cherry. And … 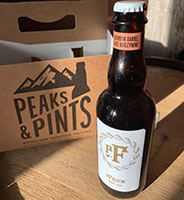 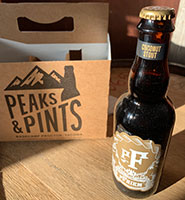 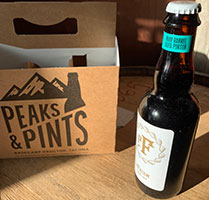 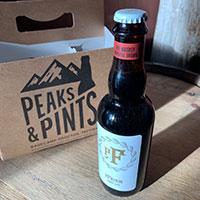 pours a black walnut hue, bursting with rich notes of brandied cherry, toffee, and a kiss of char. Rich and bold flavors of creamy vanilla bean, rye, dried fruit, and toffee coat the tongue. It finishes with a touch of spice, wood smoke, and round heat. 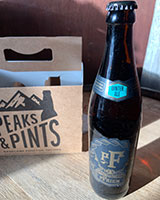 Brewed with a malt bill of Rahr Pale, Simpsons Munich, Simpsons Crystal Dark, and Carafa III German roasted malt, plus Chinook, Mosaic, Citra, Nelson, and Eldorado hops, pFriem Winter Ale sports a fruity aroma with a touch of spice; waftings of fresh baked fruitcake with a touch of spruce tree. Rich bold flavors of hops and malt meld with a touch of orange zest and huckleberries. The finish leaves the mouth covered with a trace of caramel, cut by an assertive hoppiness.