Rob Lutz’ beer career began as a keg washer at Amnesia Brewing, the North Portland brewery that opened in May of 2003 on Mississippi Avenue. Amnesia moved to Washougal, Washington, then folded. Lutz went in the opposite direction. In late 2014, he and Dan Malech opened StormBreaker Brewing in Amnesia’s former spot. Their creative beer lineup earned awards. The duo opened a second spot in Portland’s St. John neighborhood, as well as expanded their Mississippi location, adding an axe-throwing platform. Since there is a break in the rainy weather today, Peaks & Pints presents a to-go flight of StormBreaker beer that we call Peaks and Pints Pilot Program: StormBreaker Beer Flight. 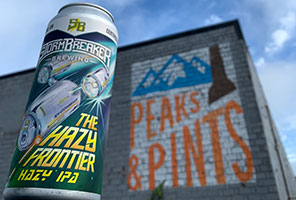 Haze, the final frontier
These are the voyages of the brewery StormBreaker
Its eight-year mission so far
To explore hazy new worlds
To seek out new hazy life
And new craft beer enthusiasts
To boldly go where no haze has gone before

StormBreaker’s The Hazy Frontier hazy IPA is brewed with Citra, Mosaic and Strata hops for aromas of passionfruit, and mango with flavors of grapefruit, tropical fruit, and hints of strawberry. 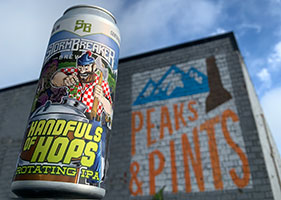 The newest version of StormBreaker’s Handful of Hops rotating IPA series is a special one— It’s brewed in tribute to Nick, an StormBreaker regular, the dad of a StormBreaker extended family member, and an all-around great guy. We busted out some fantastic hops to honor our friend. Nelson Sauvin, Idaho 7, Citra, and Kohatu hops provide aromas of citrus, tropical fruit, and flavors of stone fruit, with hints of lime and pineapple. 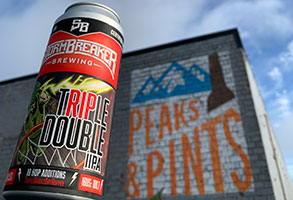 A triple-double is defined as a performance in which a basketball player accumulates a double-digit number total in three of five statistical categories — points, rebounds, assists, steals, and blocked shots — in a single game. Achieving a triple double in hoops is impressive but achieving it in your beer is even better. With 10 hop additions of three hop varietals, Mosaic, Citra, and Amarillo, this beer scores on your palate, rebounds in your nose with big aromas of grapefruit citrus and pineapple, and is assisted by the punchy, juicy citrus flavors to balance the slight upfront bitterness and big. 8.5%