Peaks and Pints Pilot Program: New 22s On The Fly

If you followed at least a few of the New Year’s Eve drinking suggestions Peaks & Pints threw at you, chances are you’re in desperate need of an effective Hangover remedy this morning/afternoon, the first day (cough! ouch!) of 2022. Since the main culprit of a nasty hangover is dehydration, you should have been drinking plenty of water with your saisons and sours last night. If not, only time is going to make the hairy, ugly pounding go away. These morning-after drink recipes from legendary restaurateur Trader Vic Bergeron, however, may help. The Banana Cow: 1 crushed ripe banana (a good source of hangover-fighting potassium), 2 level tablespoons of powdered sugar, 3 ounces of whole milk, 1-1/2 ounces of Puerto Rican rum, and (cough! ouch!) cracked ice; blend well. Failing this “cure,” you can follow the old adage of, “Why hangover when you can hang on.” Since it’s 2022, Peaks & Pints suggests you grab one or all these recent arrival, 22-ounce bottles in our to-go flight, Peaks and Pints Pilot Program: New 22s On The Fly. 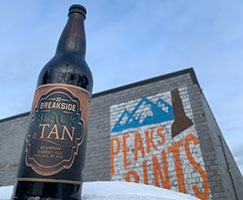 Peaks and Pints Pilot Program: New 22s On The Fly

Breakside Brewery takes on this age-old idea into uncharted territory by using a bourbon barrel-aged stout as the “black” component. The “tan” is made from young golden beer and some bourbon barrel-aged Scottish ale. The 40/60 blend of aged and young beer pops with chocolate and bourbon flavor yet manages to stay easy drinking. 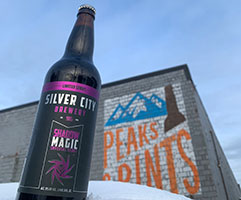 The foreign extra stout style started back with the 19th century, being developed in the year 1801 by Guinness, who initially named the beer, the West India Porter. Guinness designed this beer specifically to be shipped to Irish expatriates that were working in the Caribbean at the time. To withstand the long trip from Ireland, the beer was brewed bigger with extra hops and more alcohol, which serve as natural preservatives. The beer later became known as the Foreign extra stout. Inspired by the traditional foreign extra stout style, Silver City Brewery Shadow Magic brings deep, rich, malty chocolate flavor and a velvet-smooth body from the addition of oats and roasted wheat. 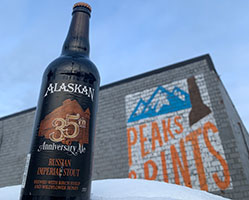 Alaskan 35th Anniversary Ale is the culmination of 35 years of trial, error, perseverance, ingenuity, and brewing expertise at Alaskan Brewing. Incorporating wildflower honey, birch syrup, chocolate and a hint of smoke, this Russian imperial stout begins with some malty sweetness and coffee notes that transition into a nice lingering bitterness. 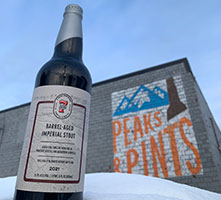 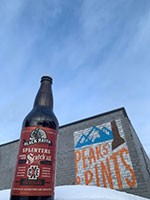 Black Raven’s Second Sight Strong Scotch Ale was transformed after resting in bourbon barrels, emerging as the delicious Splinters Strong Scotch Ale. Aged for many months in various bourbon barrels, Splinters picks up the best of the barrel for added complexity of flavor. All the barrels are then combined, and the beer is aged for another month in a stainless-steel tank to meld and mature into a sweet ale, with bourbon, vanilla, caramel, and a scotch ale finish.