Peaks and Pints Pilot Program: Music Matters On The Fly

Music matters, at least in the beer world. Few things go together like drinking craft beer and listening to music. It’s a combination so universal, it’s no wonder why brewers like to have their beverages associated with their customers’ favorite bands and artists. Some have even brewed beers with the style and artistry of these musicians in mind. In fact, Felipe Reinoso Carvalho, Ph. D., a researcher in Brussels who found you can enhance the flavor perception of your favorite brew by listening to the right jams. You’re constantly surrounded by sensory stimuli, like sound, sensation, scent, and color — all of which influence your taste. You wouldn’t think music would have such an impact on taste; but science proves otherwise. So, drop by Peaks and Pints today, listen to some music and drink Peaks and Pints Pilot Program: Music Matters On The Fly.

Peaks and Pints Pilot Program: Music Matters On The Fly 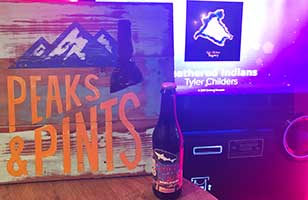 In music matters, an audio power amplifier (or power amp) is an electronic amplifier that amplifies low-power electronic audio signals such as the signal from radio receiver or electric guitar pickup to a level that is high enough for driving loudspeakers or headphones. In beer matters, a Campfire Amplifier is a Dogfish Head milk stout brewed with real marshmallows, graham crackers, coca nibs, cinnamon, Madagascar vanilla beans and a pinch of smoked malt. 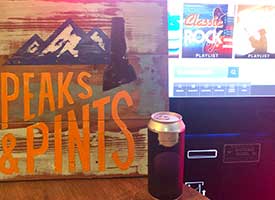 In music matters. Darkwave is genre that emerged from the new wave and post-punk movement of the late 1970s. Darkwave compositions are largely based on minor key tonality and introspective lyrics and have been perceived as being dark, romantic and bleak, with an undertone of sorrow. In beer matters, Darkwave is an American stout by Varietal Beer with a lighter malt bill for more coffee and dark chocolate flavor. Crystal malts provide a more balanced finish with a hint of toffee. 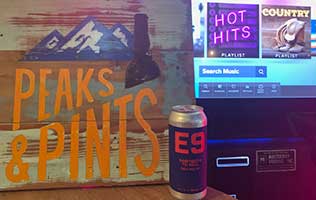 In music matters, sawtooth is a waveform which, as seen on an oscilliscope or in a waveform editor, rises in a straight line from a minimum value to a maximum value (or vice versa), then snaps back to the starting value. The result looks like the teeth of a saw, hence the name. In beer matters, Sawtooth to Hell is a delicious E9 Brewing West Coast IPA brewed with Idaho grown “Pure Idaho” pilsner malt, then massively dry-hopped with Idaho Gem and Idaho 7 hops, for aromas and flavors of tropical fruit, pineapple, and sweet hard candy. 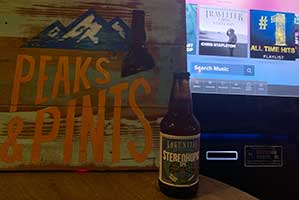 In music matters, stereophonic sound or, more commonly, stereo, is a method of sound reproduction that creates an illusion of multi-directional audible perspective. In beer matters, Lagunitas Brewing‘s StereoHopic Series channels their 25-plus year hop love affair into a spotlight on two special varietals at a time. This first volume shows what happens when New Zealand’s citrus/mango-y specialty, Nelson Sauvin, and one of Yakima’s heavy hitters, Mosaic, each take a speaker.