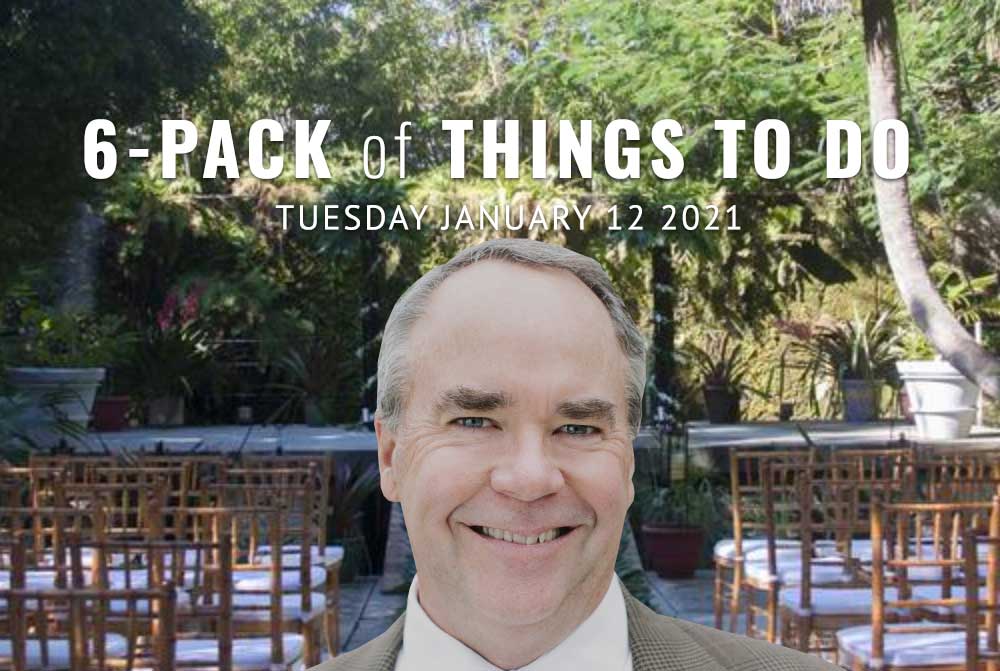 Thanks to everyone who contributed food and money to the Hoppy Holiday Food Drive. The community raised 3 tons of food for the Emergency Food Network. Now on to today’s 6-Pack of Things To Do. Cheers!

ADULT CONSERVATORY CLASS: Whether you’re exploring acting for the first time, renewing your passion for the stage, or continuing to develop your skills, Tacoma Arts Live’s Adult Conservatory Classes can help, beginning tonight. David Fischer, Tacoma Arts Live executive director (pictured), and Marilyn Bennett, founder and artistic director of Tacoma’s Toy Boat Theatre will lead the classes, including a tonight’s two-week run of Script Study Session 1: Anna in the Tropics, a poetic, Pulitzer Prize winning play set in a Cuban-American cigar factory in 1929 where a new “lector” becomes a catalyst in the lives of the women in the factory, as literature, the tropics and the American dream collide. During Session 1 you’ll learn about compelling theatrical storytelling and how great plays are constructed. 7-8:30 p.m., Tacoma Arts Live Zoom, $35, register here

BEER FLIGHTS: Music matters, at least in the beer world. Few things go together like drinking craft beer and listening to music. It’s a combination so universal, it’s no wonder why brewers like to have their beverages associated with their customers’ favorite bands and artists. Some have even brewed beers with the style and artistry of these musicians in mind. In fact, Felipe Reinoso Carvalho, Ph. D., a researcher in Brussels who found you can enhance the flavor perception of your favorite brew by listening to the right jams. You’re constantly surrounded by sensory stimuli, like sound, sensation, scent, and color — all of which influence your taste. You wouldn’t think music would have such an impact on taste; but science proves otherwise. So, drop by Peaks and Pints today, listen to some music and drink Peaks and Pints Pilot Program: Music Matters On The Fly. 11 a.m. to 8 p.m., 3816 N. 26th St., Basecamp Proctor, Tacoma

HONORABLE ZOOM: The University of Washington-Tacoma Student Activities Board hosts a public Zoom event with The Honorable Justice G. Helen Whitener. Justice Whitener served as a Pierce County Superior Court judge until her appointment to the Washington State Supreme Court in April of 2020. Governor Jay Inslee appointed her to the Pierce County Superior Court in 2015 and she was elected to her position in 2015 and was re-elected to a full term in 2016. The presentation will be followed by a Q & A. 6-9 p.m., UW-T Zoom Bench

GRIT CITY THINK AND DRINK: The treatment of hate speech in the United States is problematic in light of a myriad of social tensions that are continuing to intensify. Old arguments that free speech serves as a societal pressure valve and that open speech leads to truth hold little sway when, 200 years later, hatred against groups based on their identities remains rampant and insidious. Inevitably, the hate speech debate raises serious questions concerning the role of speech in a free society, the nature of democracy, and the importance of other human rights. The University of Washington-Tacoma Think and Drink session examines when we should reject free speech, led by Chris Demaske, an associate professor of communication in the School of Interdisciplinary Arts and Sciences at UW-T where she has served on the faculty since Autumn 2001. The evening ends with giveaways and a moderated Q&A. Grit City Think & Drink is free to the public and open to all ages.
6:30-8:30 p.m., Grit City Think and Drink Zoom Room, free

TACOMA LIGHT TRAIL: The Washington State History Museum has lit its towering front archways in a blast of colorful hues as part of the Tacoma Light Trail, which features more than 50 artists, arts organizations, businesses and downtown spaces hosting free light installations. At the History Museum stop, enjoy the shining lights and listen to the late Harold Moss, Tacoma’s first Black mayor, in a brief oral history as he tells the story of when he first arrived in the city. You can play the soundtrack from the WSHS stop on the Tacoma Light Trail website; or, you can download the free Echoes mobile app to your phone, sign in and turn on location, and the sounds will automatically play as you visit each location on the trail. 5-9 p.m., through Jan. 24, tacomalittrail.com, Echoes sound app