Heard of the Mt. Rainier Infinity Loop? Don’t be sheepish if you haven’t. On July 27, 2016, 99 hours and 7 minutes and more than 120 miles and 40,000 feet of elevation gain later, Gavin Woody successfully completed the first and only attempt of the Mt. Rainier Infinity Loop: Summit Mount Rainier, then descend on the opposite side, run 30 miles back to your starting point, climb the same mountain again, head back down, then run the 70-mile Wonderland Trail the opposite direction back to the starting point. The route almost mimics the infinity sign. This summer, Alex Borsuk and Kaytlyn Gerbin became the first all-female team to complete the epic feat. Oh, yeah: The endurance event is unsupported. Loopers are on his or her own.

Ready for the Peaks and Pints Pilot Program: Mount Rainier Infinity Drinkers On The Fly? This is what you’ve been training for all summer, right? 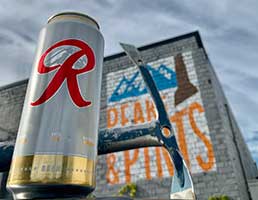 FIRST LEG: In 1883, Andrew Hemrich and partner John Kopp established Bay View Brewery in Seattle’s Georgetown neighborhood. Ten years later, Bay View Brewery joined with the breweries of Albert Braun and Claussn-Sweeney to form a new association, the Seattle Brewing & Malting Company. The brand name eventually chosen for the company’s flagship beer was “Rainier,” named after the mountain. The Bay View plant continued to operate, and in 1906 added a bottling shop and additional refrigeration. By 1905 production of Rainier Beer reached 300,000 barrels per annum. The company employed more than 300 men, and there was room to build worker homes beside the Duwamish River that then still curved through Georgetown. Kopp and Hemrich produced Rainier beer in Washington until 1916, when the state of Washington enacted its own prohibition, four years before the 18th Amendment enacted the nationwide prohibition. Following the repeal of the Prohibition, the brewery was purchased by Lethbridge, Alberta brewers Fritz and Emil Sick, who then repurchased the Rainier brand and began brewing Rainier back in Seattle in 1935. Today, Pabst Brewing Co. brews Rainier Beer with a satisfying malty flavor over a slightly fruity background, spiced with Chinook, Mt. Hood, and Willamette hop notes. 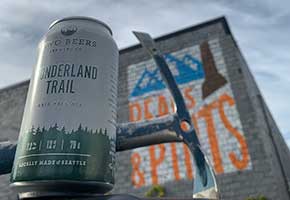 FIRST LOOP: Two Beers Brewing founder Joel VandenBrink hiked the 93-mile trail circumnavigating Mt. Rainier solo. He dreamed of above 80 International Bitterness Units while hiking through Mystic Camp at 5,570 feet. He believed he could push an IPA close to the alcohol by volume mark of a double IPA as he trudged along the South Mowich River. He drew inspiration mixing strong citrus flavor hops with hops boasting earthy, pine characteristics while traversing along a ridge to Devil’s Dream Camp. Wonderland Trail IPA is the product of nearly two years of recipe development. Featuring a seamless blend of Washington-grown hops, this flavorful Northwest-style IPA is brewed with Cascade, Amarillo, Mosaic and Legacy hops, then dry hopped with Citra and Mosaic hops, complemented by 2-Row, Vienna and Munich malts. On the nose, a slightly sweet aroma of tangerine is followed by a wave of citrus and passion fruit on the palate, finishing clean and refreshing.

SECOND LEG: Peaks and Pints serves Rainier Lager on draft — our only permanent draft handle. It has poured out of our western red cedar tap log every day since we opened Nov. 1, 2016. Rainier beer brings together nature’s bounty from the great Northwest. Pure spring waters combine with golden barley and verdant hops to produce a beer rich in taste and texture. Fermented slowly with a pedigree yeast culture under tightly controlled conditions, Rainier comes forth with a satisfying malty flavor over a slightly fruity background, spiced with Chinook, Mt. Hood and Willamette hop notes.

SECOND LOOP: No better way to represent The Wonderland Trail in this to-go beer flight than Two Beers Brewing’s salute to the famous trail circumnavigating Mount Rainier. It’s the Seattle brewery’s first foray into the West Coast-style, a light bodied IPA complemented by 2-Row, Vienna and Munich malts while featuring a seamless blend of Washington-grown Amarillo, Citra, Mosaic and Cascade hops. Expect a slightly sweet aroma of tangerine followed by a wave of citrus and passion fruit. 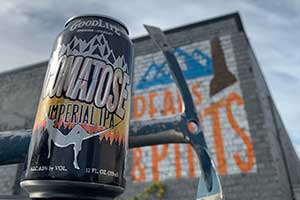 VICTORY BEER: GoodLife Brewing’s Comatose is a triple dry hopped, imperial IPA brewed with High Color Pale, Bonlander Munich and Carafoam malts balanced by Bravo, Zythos, Zeus, Chinook, Cascade and Summit hops. This heavyweight has more than 5 pounds of hop per barrel, which makes the aroma smell of strong orange candy followed by citrus and spice. The beer continues jabbing the taste buds with a taste of biting into a fresh grapefruit with a balanced malt character, luscious and slightly oily mouthfeel and a strong and clean finish. Good night!