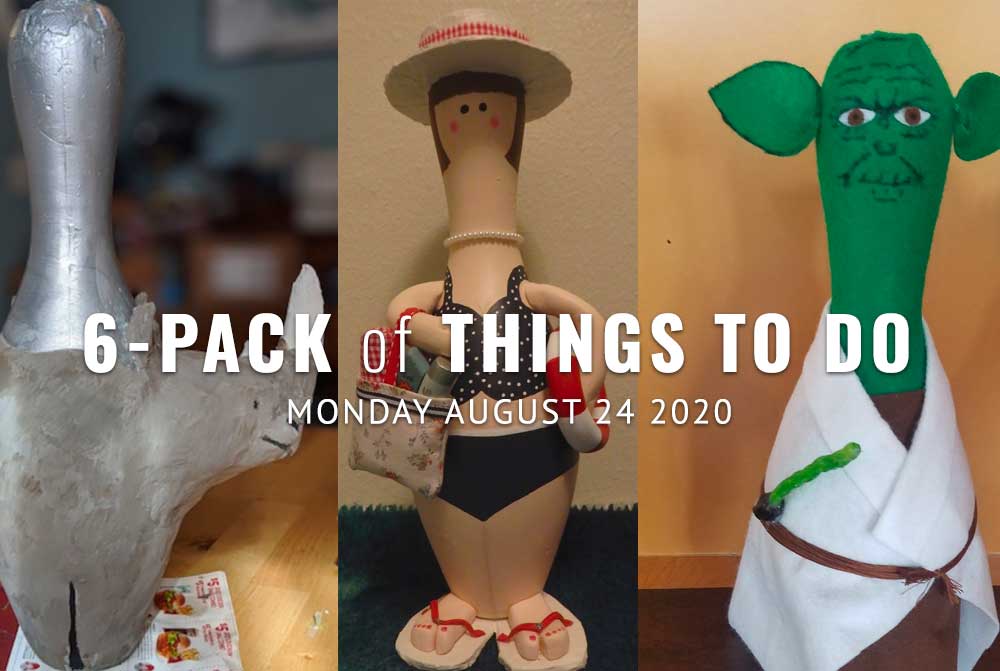 Summer is not really summer unless you’re livin’ it. Peaks & Pints 6-Pack of Things To Do may help. Cheers!

ANIMAL FUNDRAISER: The Point Defiance Chapter of the American Association of Zoo Keepers’ main objective is animal conservation. Everything else is irrELEPHANT. Comprised of Point Defiance Zoo & Aquarium employees, interns, volunteers and supporters, Point Defiance AAZK holds monthly fundraisers through their Drinking For Conservation’s tavern parties, led by AAZK Chapter President Suzanne Akerman. Bowling for Rhinos is AAZK’s premier event. Occurring every year since 1990, it has raised over $8 million all-time, 100 percent of which has gone directly to efforts for rhino and other animal conservation in Africa and Asia. Voting is now open for Bowling Pins for Rhinos 2020. There are 35 beautifully transformed bowling pins falling under the categories of: best rhino pin, best animal pin, best non-animal pin, best overall and runner up. Check out Point Defiance AAZK’s website to get a close up view of each pin and to submit your votes. Voting is open until 5 p.m. on Monday Aug. 31. They will be auctioned off Sept. 4-13.

CIDER FLIGHT: Summer is almost over, but there are a still several more weeks to sneak in some cider sipping outside before leaves smack you in the face. Before you know it, everyone will be drinking pumpkin spice everything. It’s Monday, which means Peaks and Pints offers a to-go flight of cider. Finnriver Farm & Cidery has released several new ciders, and we just grabbed one of Whitewood Cider’s star ciders. Check out Peaks and Pints Monday Cider Flight: August Arrivals. 11 a.m. to 8 p.m., Peaks and Pints, 3816 N. 26th St., Proctor District, Tacoma

SUFFRAGE CENTENNIAL: In 1920 after a decades-long battle, the Nineteenth Amendment to the United States Constitution was ratified, granting women the right to vote. On Nov. 2 of that year, more than eight million women voted in national elections for the very first time. This month marks the National Suffrage Centennial and to celebrate, the Washington State Historical Society invites you to the digitally delivered Suffrage Special Whistle Stop Tour. The Tour that launched Aug. 19 makes a stop in Seattle today with a focus on House Bill 2759 that was signed into law by Gov. Jay Inslee establishing the Washington State Women’s Commission. The Tour stops in Tacoma tomorrow. Noon, Washington State Historical Society Facebook

ICE CREAM: Back in the lazy, hazy days of kiddieville you weren’t anybody unless you had your birthday party at Farrells. For the young and sugar obsessed, the restaurant-cum-ice-cream-parlor, then stuck in a little corner of the Tacoma Mall, was a haven. Decked out like a turn-of-the-century soda fountain, Farrells was big on stripes — booths, walls and shirts — with suspenders and sleeve garters for the waitstaff. And it had a massive candy counter, displaying old-fashioned favorites like salt water taffy and rock candy, that had to be passed going in or out — a parent’s worst nightmare. Farrells is long since gone, but as an adult, Peaks & Pints is still addicted to ice cream. And while Farrells is great for nostalgia, these days it’s less about bells and whistles and more about finding an ice cream concoction that’s nothing short of orgasmic. Enter Ice Cream Social. Noon to 9 p.m., 2914 6th Ave., Tacoma

HIT THE BEACH: Since Commencement Bay property in Tacoma is a far-fetched dream — at least until the seas rise a few more hundred feet — it’s best to find watery alternatives. Peaks & Pints favorite is the Browns Point in Northwest Tacoma. What Browns Point lacks in beach yardage, it makes up for by including a lighthouse. Just grab a book and your most fashionable flip-flops and you’re on your way to an afternoon packed with sea-faring delusions of meeting Aquaman. Browns Point, 201 Ton-A-Wan-Da Ave. NE, Tacoma

MOVIE: The Grand Cinema screens Made in Bangladesh in their Virtual Screening Room. In this compelling and inspiring drama from writer/director Rubaiyat Hossain, young factory worker Shimu, 23, works in a clothing factory in Dhaka, Bangladesh, toiling away making inexpensive garments for global export. Faced with difficult and exploitive conditions at work, she finally decides to try and make things better by starting a union with her co-workers. Despite threats from the management, the disapproval of her husband, and the fears of her colleagues, Shimu is determined to go on, not only for herself, but for her friends, as well. $12 movie