Peaks and Pints Pilot Program: Icicle Brewing On the Fly

Icicle Brewing Co. sits in the Bavarian theme park known as Leavenworth, Washington, which seems perhaps the most appropriate place for a brewery. Founded in 2010 by Pamela and Oliver Brulotte, Icicle continues to be a 100 percent family and employee-owned production brewery and brewpub. The brewery draws water from nearby Icicle Creek, a run-off from surrounded by numerous mountain ranges including the Stuart Range and Wenatchee Mountains. Owner Oliver Brulotte has deep family roots in Washington’s hop farming history. With a focus on sustainability and community, the brewery is a 1 percent for the Planet Member and is the first small craft brewery in the state to close the loop on its CO2 emissions with carbon capture technology. Today, Peaks and Pints offers a to-go flight of Icicle beer that we call Peaks and Pints Pilot Program: Icicle Brewing On the Fly.

Peaks and Pints Pilot Program: Icicle Brewing On the Fly 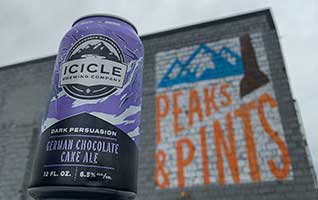 You can finally have your cake and drink it too! Icicle Dark Persuasion is brewed with rich coconut, vanilla and cacao nibs, which evoke flavors of liquid German chocolate cake. Dark roasted specialty malts enhance the chocolate character and Warrior hops balance the sweet, milk sugar and malty goodness, making this milk stout decadent and drinkable. Seriously, this stout tastes exactly like German chocolate brownie, with strong chocolate and coconut notes, a touch of vanilla and a smooth finish. 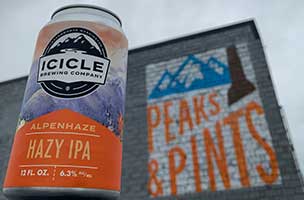 Icicle’s signature hazy is a bright, tropical and juicy IPA brewed with Mosaic, Citra, El Dorado, and Simcoe hops, giving it notes of mango, pineapple, tangerine and apricot that excite the nose and palate. The malt profile provides a body that ends each sip with a light and pillowy mouthfeel. 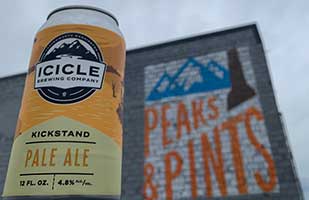 “You can’t deny the value of a cruiser bike’s kickstand. We put that same undeniable value into our newest beer, Kickstand Citra Pale,” states Icicle’s description of their pale ale. It’s a highly drinkable pale ale packed with citrus flavors and aromas. The beer stands firmly on a foundation of Warrior hops for a pleasantly bitter base and then cruises to its destination on the cone-tails of Citra hops. Kick back at Peaks and Pints and enjoy the Leavenworth brewery’s easy drinking ode to the little piece of metal that keeps your cruiser classy. 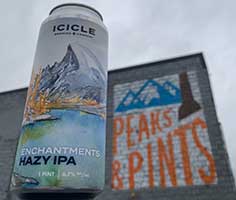 One of the trademark peaks of fabled Enchantment Lakes, Little Annapurna is one of the most photographed peaks in this region within the Alpine Lakes Wilderness area of Washington state’s Cascade Mountain Range. While certainly not anything like its namesake (the real Annapurna of Maurice Herzog fame), Little Annapurna is nonetheless one of the most frequently climbed mountains in the state. Enchantments is also a hazy IPA series by Icicle Brewing, the Leavenworth brewery on the edge of the Enchantments. The fourth in our series, Annapurna is brewed with a generous amount of Idaho 7, Citra, El Dorado and Mosaic hops, giving it intense notes and aromas of juicy pineapple, mixed citrus and ripe tropical fruit, with a soft mouth feel and finish, which is why the brewery dropped the “Little” in the beer’s name. 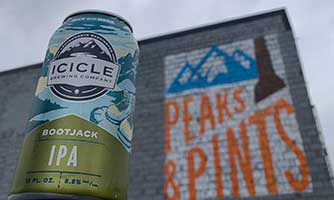 Bootjack IPA is a Northwest classic IPA inspired by the rugged and gentle terrain of the Cascade Mountains. Starting with the pristine waters of Icicle Creek, Icicle adds the intense flavors and aromas of locally grown Yakima hops, pairing the citrusy floral hop notes with a sweet-malty undertone, biscuit malt notes and a resinous linger. This isn’t a pine bomb; instead, you get smooth citrus, lots of fruit, and a hop bitterness that builds slowly, coming to prominence late in the finish.