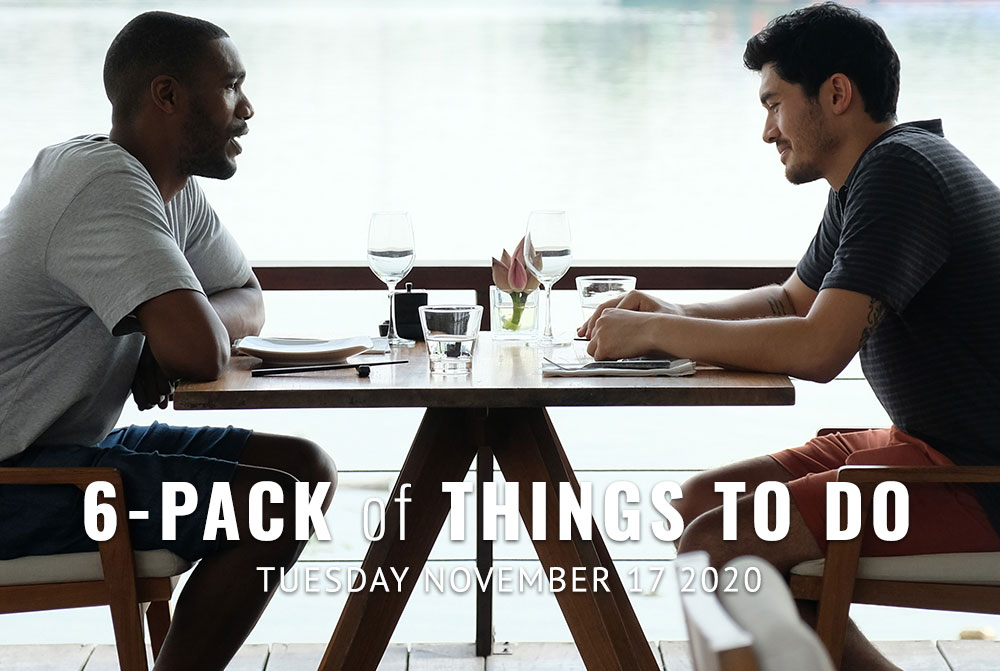 6-Pack of Things To Do. It’s how we make it through. OK, bourbon barrel-aged imperial stouts help too. So does Authur Shelby’s tender moments. And heart-meltingly stupendous West Wing reunions on HBO Max. Memes, Tik Tok, Seth Meyers, whatever makes you laugh and brings your heart and attention more into the bright, lucid current moment, as opposed spinning out into apocalyptic future scenarios, seem more beneficial and necessary than usual, even though they were pretty well beneficial and necessary before, don’t you think?

FILM: Henry Golding (Crazy Rich Asians) returns to the screen as a leading man in Hong Khaou’s Monsoon. Khaou (Lilting, 2014), however, immediately brings the actor down-to-earth. Golding plays Kit, a British Vietnamese man who’s in mourning. He arrives back in Vietnam after a 30-year absence. His parents fled the country during the war, settled in England and never returned. Kit’s there to scatter their ashes and to reconnect with his origin story. Stream it in The Grand Cinema’s Virtual Screening Room while sipping on an Oskar Blues Death By Coconut porter from the Peaks & Pints cooler. $12 movie, photo courtesy of Dat VU/Peccadillo Pictures

RESTAURANT RALLY: This is the final week for the Pierce County Restaurant Rally. The promotion offers 30 percent discounts on dine-in and take-out meals today, and take-out only meals Nov. 18-19 at more than 300 Pierce County restaurants, including Peaks & Pints. The discount excludes alcohol and orders via third-party delivery and take-out services. A list of participating restaurants is available at piercecountyrestaurantrally.com. Stop by Peaks & Pints for 30% off both dine-in and carry-out sandwiches, salads, appetizers and our sandwich special, alcohol excluded. Reservations are strongly recommended on the Open Table app. 11 a.m. to 10 p.m., Peaks and Pints, 3816 N. 26th St., Basecamp Proctor, Tacoma

BEER FLIGHT: Icicle Brewing sits frozen in the Bavarian theme park known as Leavenworth, Washington, which seems perhaps the most appropriate place for a brewery. Founded in 2010 by Pamela and Oliver Brulotte, Icicle continues to be a 100 percent family and employee-owned production brewery and brewpub. The brewery draws water from nearby Icicle Creek, a run-off from surrounded by numerous mountain ranges including the Stuart Range and Wenatchee Mountains. Owner Oliver Brulotte has deep family roots in Washington’s hop farming history. With a focus on sustainability and community, the brewery is a 1 percent for the Planet Member and is the first small craft brewery in the state to close the loop on its CO2 emissions with carbon capture technology. Today, Peaks and Pints offers a to-go flight of Icicle beer that we call Peaks and Pints Pilot Program: Icicle Brewing On the Fly. 11 a.m. to 10 p.m., Peaks & Pints, 3816 N. 26th St., Basecamp Proctor, Tacoma

DISCUSSION: Each one of us adds to the greenhouse gas emissions linked to climate change. But there are steps we can take to change course. Planting trees, which sequester carbon, counter the effects of climate change while fostering healthy forests. Grab a Peaks & Pints Campfire Crowler full of Kulshan Brewing Tree-dimensional IPA and join Forterra for a Coffee & Conversation series discussion. Learn about Forterra’s Evergreen Carbon Capture program, how businesses and individuals can calculate their carbon emissions, and how a local solution can address a global issue. 1-2 p.m., Forterra Zoom Room, free

THEATER: University of Puget Sound Theater Department matches scenes from plays with student directors and actors in its Directors’ Lab series, which kicks off tonight for a two-night run. Each night will include four entirely different scenes chosen by the student directors. The scenes run the gamut from dramatic to absurd. It’s a festival of scenes, if you will. 5:30 and 7:30 p.m., Nov. 17-18, UPS Youtube, free

BINGO AND BREWS: If you love Reuben’s Brews and wings then head over to Rainier Growlers on South Hill tonight. Every Tuesday, the craft beer bar hosts bingo live for the social-distance tables and streams it in a Zoom conference room style from 6-9 p.m. featuring five rounds with Tyler and Mike as the hosts. Ben and crew will hand out bingo cards until 6 p.m. with a $75 gift card from Wings Stop up for grabs. Larry from Reuben’s will pop into the Zoom Room too! 6-9 p.m., Rainier Growlers, 13105 Meridian E., South Hill Puyallup, Rainier Growlers Zoom Room (password: growlers)