Peaks and Pints Pilot Program: Guinness Variants On The Fly

Arthur Guinness actually began by brewing ales and porters. It wasn’t until 1819, with the introduction of Daniel Wheeler’s black “patent” malt, that stouts began to be brewed. The words “dry” or “Irish” are often tacked on to “stout” in order to differentiate it from English and American sweet or milk stouts, which usually contain oatmeal or lactose. Yes, the Guinness brewery in Park Royal, London closed in 2005. The production of all Guinness sold in the UK and Ireland was moved to St. James’ Gate Brewery, Dublin. Two years ago, Guinness opened a new brewery in Maryland, the Open Gate Brewery just outside of Baltimore. It’s the first time Guinness has had a brewery in the U.S. in more than 60 years. Today, Peaks and Pints presents a to-go flight of Guinness that we call Peaks and Pints Pilot Program: Guinness Variants On The Fly.

Peaks and Pints Pilot Program: Guinness Variants On The Fly 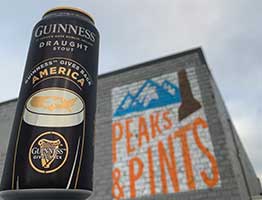 Guinness Extra Stout is a top-fermenting brew made with roasted malts and roasted unmalted barley. It’s classified as a “dry stout” or “Irish stout” — smoother and roastier than its English and American counterparts. The regular stuff is extra-dark with a black hue and a dense, tan-colored foam. Despite its dark color and strong flavor, it’s medium-bodied and quite drinkable. Fun fact: A “perfect Guinness pour” should take 199.50 seconds. This is the result of pour at an angle of 45 degrees followed by a rest. This is crucial. Most Irish people would cringe if they saw anyone pour it any other way. 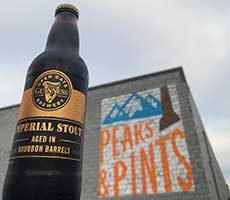 The big wigs in Dublin trusted the team in Baltimore to come up with a winning imperial stout, which they did. For their Imperial Stout, they took it even further by aging it in bourbon barrels. The result is a stout black as night with a tan head. From the barrels, they extracted we extracted huge aromas of bourbon, vanilla, and dark fruit like raisins and figs. It has a sweet, chocolatey, roasty flavor with a velvety mouthfeel, some coconut and an oak finish. 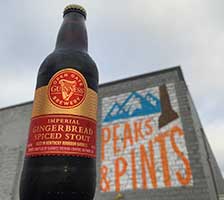 Also originating from the Open Gate Brewery in Baltimore, this winter treat is brewed with allspice, ginger, cinnamon, and nutmeg, then aged in bourbon barrels. Brewed with the warmth and merriment of the holiday season in mind, this rich, flavorful stout features notes of baking spices, dark, roasted breads, and holiday baking. The bourbon character is present, as is the characteristic vanilla found in barreled beers.