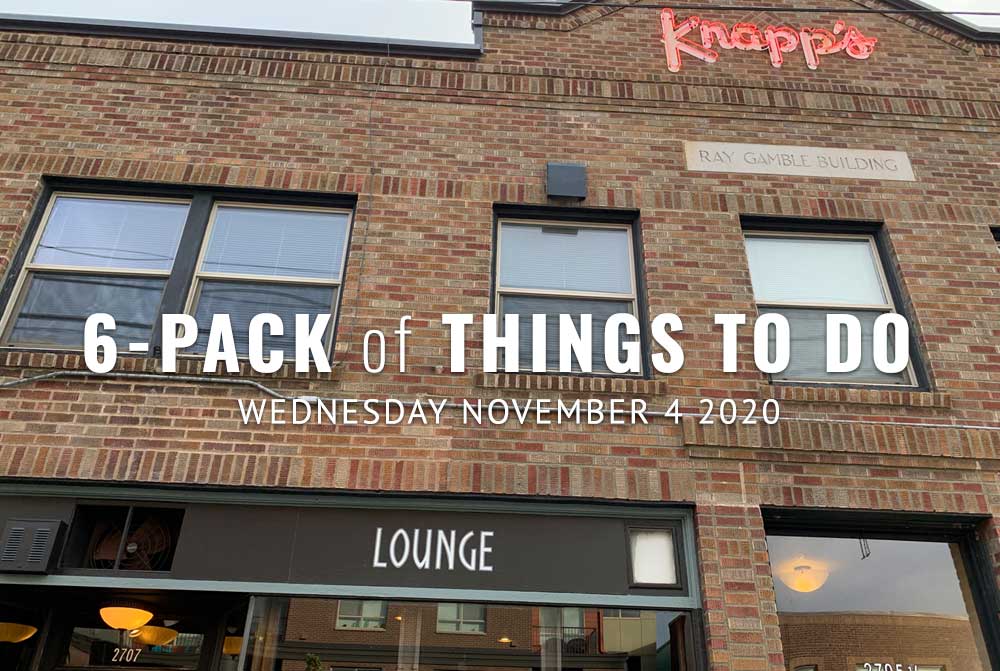 Don’t freak out. Don’t stop breathing. Don’t let the itchy demons of potential doomsday scenarios short circuit your wary soul. Peaks & Pints is almost 91 percent certain we’ll make it through today. Or maybe we won’t! But we will. Probably … thanks to 6-Pack of Things To Do.

KNAPP’S: Knapp’s Restaurant re-opened. Peaks & Pints wouldn’t know because Knapp’s closes the bar at 7 p.m., not 2 a.m. an hour after we’d roll in. Still, this is great news. This anchor of Tacoma’s Proctor District was darker than normal for 7 months and 15 days. Since the 1930s they remained open every day except Christmas. Flapjacks here we come! 6:30 a.m. to 2 p.m., lounge until 7 p.m., Knapp’s Restaurant, 2707 N. Proctor, Tacoma

BEER FLIGHT: Arthur Guinness actually began by brewing ales and porters. It wasn’t until 1819, with the introduction of Daniel Wheeler’s black “patent” malt, that stouts began to be brewed. The words “dry” or “Irish” are often tacked on to “stout” in order to differentiate it from English and American sweet or milk stouts, which usually contain oatmeal or lactose. Yes, the Guinness brewery in Park Royal, London closed in 2005. The production of all Guinness sold in the UK and Ireland was moved to St. James’ Gate Brewery, Dublin. Two years ago, Guinness opened a new brewery in Maryland, the Open Gate Brewery just outside of Baltimore. It’s the first time Guinness has had a brewery in the U.S. in more than 60 years. Today, Peaks and Pints presents a to-go flight of Guinness that we call Peaks and Pints Pilot Program: Guinness Variants On The Fly. 11 a.m. to 10 p.m., Peaks & Pints, 3816 N. 26th St., Basecamp Proctor, Tacoma, guaranteed seating on Open Table app

READING: Using information from both crystals and astrology, Sandra will create a personalized reading for you at the Crescent Moon Gifts today. The unique reading consists of choosing either six or nine crystals from more than a selection of 120-plus stones. You will select the crystals that they are drawn too and will then mentally ask the Divine, Deities, Spirit Guides, Animal Totems, Ancestors or Higher Power to provide answers/guidance to, say, the election results. Noon to 7 p.m., Crescent Moon Gifts, 6901 6th Ave., Tacoma, 15 min $30, 30 min $45, 60 min $80

HISTORY: August 2020 marked the centennial of National Women’s Suffrage. The Washington State Historical Society honored the historical event with a Suffrage Special Whistle Stop Tour — an eight-day virtual tour through the state similar to that of the “Suffrage Special” that took suffragist from around the nation to the 1909 National Suffragist Convention in Seattle. Last month, the Washington State History Museum opened a new Suffrage exhibit, Votes for Women – 100 Years and Counting, curated by Chandler O’Leary and Jessica Spring, Tacoma authors of the award-winning 2016 book, Dead Feminists: Historic Heroines in Living Color. Visitors spin “Suffrage Wheels” with a special touch-free tool to keep it contact-free, and depending on where the quasi roulette wheel lands, may or may not get to vote on their favorite artifact. The idea is to challenge visitors the same way women seeking the right to vote were challenged. 10 a.m. to 5 p.m., through Jan. 17, Washington State History Museum, 1911 Pacific Ave., Tacoma, $11-$14

POST-ELECTION PANEL: There is still much to discuss the day after the election. The University of Puget Sound hosts Post-Election Panel: “Where Are They Now” panel discussion with Pierce County Auditor Julie Anderson about the process of collecting, counting, and keeping our ballots safe; how the electoral college came to be, how it functions today, and why that matters for modern elections from David Sousa; the history of voter suppression in the US from Nancy Bristow; and thoughts on the state of our democracy from Dexter Gordon. 7-8 p.m., UPS Election Zoom Room

THE COOKING CHANNEL: Filmed two years, then aged like a fine barleywine, The Cooking Channel’s Food Paradise show’s “Click on the Link” episode featuring The Red Hot will finally air at 9 p.m. tonight. The sausage-themed episode visited the Tacoma hot dog and craft beer joint because, according to Click on the Link hype, “There’s comfort food classics in Tacoma, Washington.” Because the beloved Sixth Avenue joint champions strict COVID restrictions, co-owner Chris Miller told The News Tribune he, “hopes customers will watch at home and order a special sausage for takeout.” 9 p.m., The Cooking Channel