Peaks and Pints Pilot Program: Evil Twin On the Fly

Jeppe Jarnit-Bjergsø, the founder and man behind Evil Twin Brewing, was a physics and English teacher in his native Denmark before starting Copenhagen’s Ølbutikken, a highly regarded beer store. He’s also an evil twin himself. His brother, Mikkel Borg Bergsø, brews under the Mikkeller label. Jarnit-Bjergsø, however, has done his best to outshine the good twin. He founded Evil Twin in 2010 as a nomadic brewery. Like his brother Mikkel, Jarnit-Bjergsø would concocts a recipe for his beer and hand it to another brewery with some extra capacity. This contracted brewing partner brewed, bottled, priced and sold the beer, then cut Jarnit-Bjergsø a check. Evil Twin beers were brewed everywhere from South Carolina and Scotland to Holland and Denmark. In 2012, Jeppe Jarnit-Bjergsø moved it to Brooklyn and relocated there with his family, opening the beer bar TØRST the same year. Today, Peaks and Pints presents a to-go flight of Evil Twin craft beer in what we like to call Peaks and Pints Pilot Program: Evil Twin On the Fly.

Peaks and Pints Pilot Program: Evil Twin On the Fly 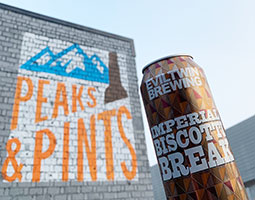 Jeppe Jarnit-Bjergsø contract brewed at Westbrook Brewing in South Carolina before moving his Evil Twi brewery to New York City. At Westbook, he brewed his Imperial Biscotti Break, a gourmet imperial stout brimming with vanilla, coffee, almond and chocolate notes. This beer starts with a strong scent of dark chocolate and dark fruit. The fruit isn’t present in the taste, but there is plenty of dark cocoa and roasted bitter coffee, all with a rich coating of nuttiness. When you’re using flavors such as chocolate, coffee and almond it can be very easy to have a beer that is too cloying or tastes artificial, but that is not at all the case with this beer. 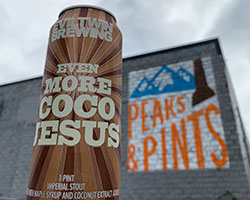 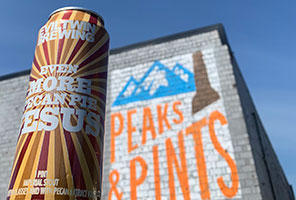 Evil Twin brewed this imperial stout brewed with molasses and with pecan extract added. It hits the nose with caramel malt, toffee, molasses, a bit of chocolate, and subtle nuts. It coats the tongue with a thick fudge-like body, pitch black color, sweet chocolate malt, caramel, toffee, and rich molasses. As it warms, a bit of nuttiness arrives, finishing with a bittersweet note. 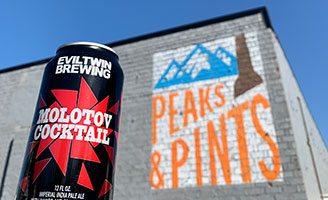 Originally brewed at Two Roads Brewing in Connecticut, this triple IPA fits the cookie-cutter description for the typical imperial IPA. Light on its effervescence, the beer pours heavy and thick, almost syrupy, with a dark amber tint. The former qualities resonate with Evil Twin, which is notable for its reliance on all things imperial. However, the beer shows its IPA side in its nose, with citrus and grapefruit, thanks to Ahtanum. The taste begins with sweet citrus and floral notes, coupled with a big honey flavor that kisses the tongue. Just before falling into a sugary mess, a flash of the bright and hoppy bitterness all-to-familiar with IPAs bites down, cutting through the sweetness. 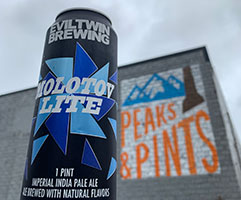 Seeing a beer with “Lite” on the label and 8.5 percent ABV would seem to be a contradiction in terms. Evil Twin Molotov Lite is actually a scaled-down version of the brewery’s 13 percent ABV Molotov Cocktail. Originally brewed at Two Roads Brewing in Connecticut, this double IPA pours a dull yellow with a tight white collar. The smell of citrus assails the nose before rich malt rides the tongue from beginning to end, with a slight vanilla or birthday cake flavor on the back end. Pineapple, peach, pear and grapefruit are all prominent — akin more to hard candy rather than juice. There’s an intense sensation of bitterness as well; it’s slightly dry but nothing the average hophead can’t handle.