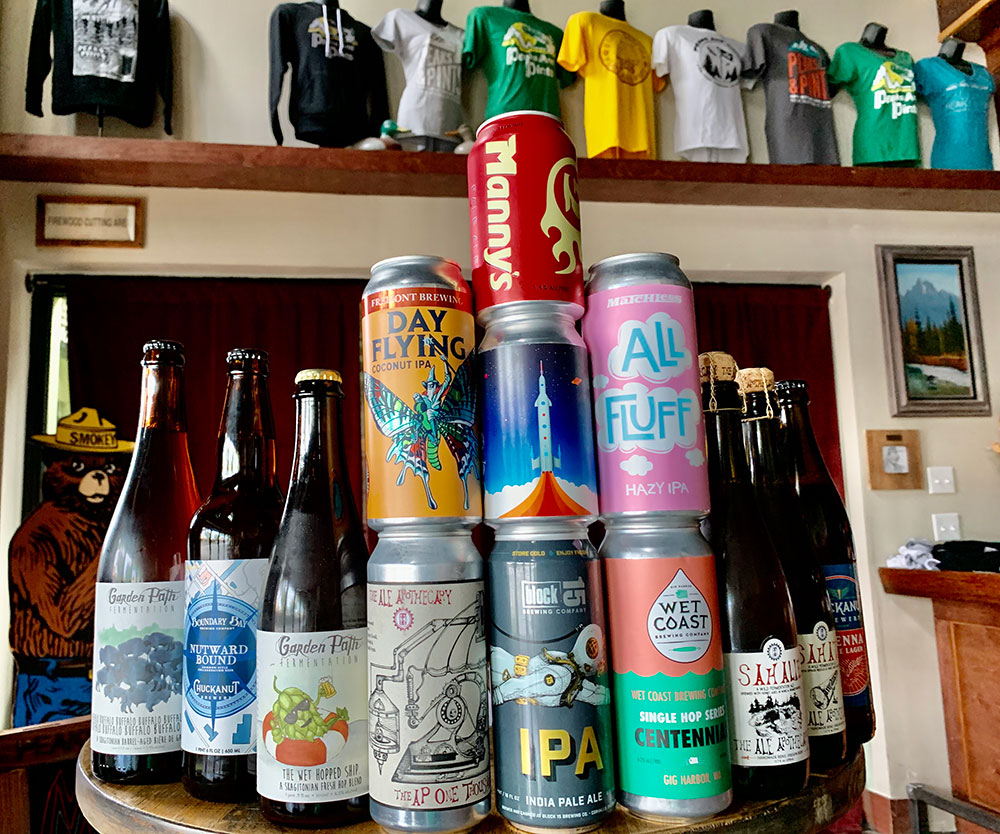 IPA: Brewed with a recipe developed over a decade of experimenting with brewing techniques and hop varietals, Block 15 IPA begins and ends with classically unapologetic Northwest hops, which their brewers carefully balance through a progressive approach to hopping, a supportive malt backbone, and a water profile that gently softens bitterness on the finish. 6.5%

THE MAISON: A wild ale cooled and fermented in a coolship, then blended from three different years of spontaneous wild beer for a nutty yet pungent and down to earth nose, followed by a very balanced acidity that brings hints of green apple and white grape. 5.5%

THE WET HOPPED SHIP: Fresh Skagit-grown hops were added to hot wort, which was chilled overnight in a coolship, fermented in an open foudre, blended with barrel aged beer, and naturally conditioned with honey. 5.2%

MANNY’S PALE ALE: As Georgetown’s flagship beer, Manny’s Pale Ale accounts for a large majority of the Seattle brewery’s production. While it might not be the hoppiest pale ale in the state, it’s crisp, clean, and smooth, with a hint of citrus and a snappy hop finish. It’s the most popular beer in Seattle. 5.4%

ALL FLUFF: Pouring like fresh-squeezed orange juice while huge aromas of ripe pineapple float out of the glass this hazy IPA has flavors of orange and pineapple along with fluffy mango. 6.4%

SAHALIE: The flagship of The Ale Apothecary, Sahalie grabbed gold at the 2018 Brussels Beer Challenge. It’s brewed with local Oregon barley malt, wheat and last year’s crop of Oregon Cascade hops, which are added to the boil copper for bitterness and dry hopped for a month in oak barrels. Hop bitterness and acid produced by Apothecary house lactobacillus culture provide the balance to the malt and oak structure of the beer, which is aged for a year in oak. Sahalie has a tropical and citrus fruit nose of apricots, pineapple, and orange produced from yeast esters and hop oils. The palate is tart and pithy, combining earthy and herbal undertones that evolve as the beer warms and opens up within your taster glass. 9.4%

SAHATI: Starting with a 200-year old Engelmann spruce tree felled on the brewery’s property, Paul Arney, the mad genius behind The Ale Apothecary, a wild-ferment brewery housed in a cabin in the woods of Bend, Oregon, created his own kuurna (an ancient Scandinavian lauter tun) to separate the wort from the grain during brewing. The bottom of the kuurna is layered with spruce branches; the needles act as a natural filter and impart resinous oils into the wort. The hollowed-out trunk of the tree also contributes spruce essence and structure from the raw wood. Brewed with barley and rye malts, along with a sparing addition of Goschie Farms Cascade hops, Sahati hits the nose with spruce, eucalyptus, wood, citrus, and subtle almond and honey. The flavor follows the nose with subtle alcohol and a speck of mint. 9.58%