“Let every individual and institution now think and act as a responsible trustee of Earth, seeking choices in ecology, economics and ethics that will provide a sustainable future, eliminate pollution, poverty and violence, awaken the wonder of life and foster peaceful progress in the human adventure.” So states John McConnell’s original Earth Day proclamation. Peaks and Pints enjoys McConnell’s Earth Day speech better than Agent Smith’s line in the first Matrix movie where he stares menacingly at Morpheus and speaks about how every mammal on Earth instinctively develops a natural equilibrium with the surrounding environment, “but you humans do not. You move to an area, and you multiply, and multiply, until every natural resource is consumed. The only way you can survive is to spread to another area. There is another organism on this planet that follows the same pattern. A virus. Human beings are a disease, a cancer of this planet. You are a plague,” and then Morpheus gets all huffy and righteous and goes on inspire Neo to prove how we are also full of beauty and fire and life, and he makes it all better by saving humankind so we can go buy the mediocre soundtrack. Yes, indeed, today is Earth Day. Peaks & Pints suggests your treat yourself (and the environment) to a cold one from an eco-friendly craft brewery like the ones we’re highlighting in our Earth Day to-go beer flight, Peaks and Pints Pilot Program: Earth Day Beer On the Fly. 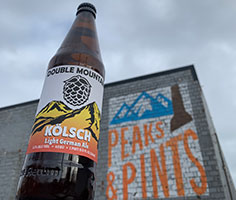 Double Mountain Brewery values sustainability, with the brewery’s warehouse on the outskirts of Hood River boasting the largest solar array in the county. The brewery also has a refillable bottle program, has sold its spent grain to be used to make bagels in a local shop, and is making plans to capture and reuse its carbon dioxide. Double Mountain built its empire around Pilsner malt sourced from British Columbia. We’re a big fan of Pilsner malt — it imparts a definite smoothness to the brew, including Double Mountain Kölsch. A tribute to the style of beer native to Cologne (Koln), Germany, this beer is a very light straw pour with just a touch of haze and a decent egg-shell-white head. A little pepper crosses the nose along with sourdough bread, biscuit, and light hops. Firm, tangy hops come through on the palate — Sterling and Perle — which is a nice combo of soft malt, fresh grain, spicy pepper, and citrus. The finish is light and refreshing. 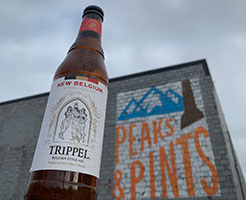 New Belgium Brewing is a certified B Corporation and gets high marks for sustainability: Its Fort Collins brewery produces 18 percent of its electricity on-site, and the company has a wall full of environmental awards. New Belgium has also been generous in its contributions to bicycle- and eco-focused organizations. What started as a homebrew recipe more than 30 years ago then tweaked to parallel new developments in hop and malt manufacturing New Belgium’s flagship Trippel opens with a bold blast of spicy Noble hops, courtesy of Saaz and Hallertau Mittlefruh, and gives way to the fruity aromas thanks to traditional Belgian yeast. Brewed with Pilsner and Munich malts, Trippel hits the nose with honey, caramelized white sugar, lemon, floral, orange and barnyard before delivering candied sugar, honey, banana, clove, candied citrus peels and white pepper deliciousness. 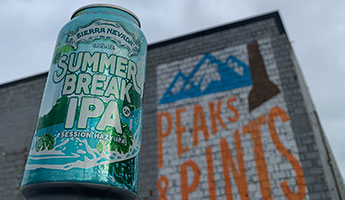 Sierra Nevada Brewing, in Chico, California, doesn’t kid around when it comes to greening its brewery. We’ve toured it. More than 10,000 solar panels and four 250-kilowatt co-generation hydrogen fuel cells provide the Chico facility with more than 50 percent of its electricity. They also operate their own CO2 recapturing and water treatment systems, they fuel up their beer delivery trucks with spent vegetable oil that converts to biodiesel in an onsite processor, as well as reuse, recycle or compost more than 99 percent of its solid waste and has restructured its packaging system for optimal efficiency and green return. Their Summer Break Hazy IPA is light and crushable, but with full flavor — the perfect brew for outdoor activities. Sierra Nevada combines two styles — a light and easy session IPA and a juicy full-flavored hazy IPA — with bold hoppy notes of mango and passionfruit, smooth malt flavor, and a low alcohol by volume number. It’s not too thin but has the right mouthfeel that really satisfies. It pops. 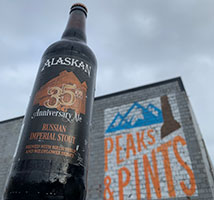 Of course, Alaskan Brewing Co. puts a strong emphasis on environmental awareness. The 49th state’s premiere craft purveyor pioneered a CO2 reclamation concept that prevents more than 700,000 pounds of CO2 from going into the atmosphere every year, they donate 1 percent of all proceeds from the sale of their Icy Bay IPA to the Coastal CODE program, an organization dedicated to preserving ocean and waterway health, and developed a groundbreaking steam boiler that runs on spent grain. They also brewed a 35th Anniversary Ale in celebration of 35 years of trial, error, perseverance, ingenuity, and brewing expertise. Incorporating wildflower honey, birch syrup, chocolate and a hint of smoke, this Russian imperial stout begins with some malty sweetness and coffee notes that transition into a nice lingering bitterness. 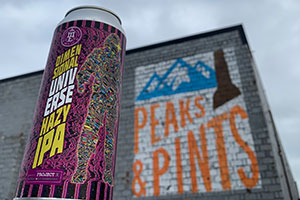 Mother Earth Brewing’s mission is to help savor the goodness of Mother Earth by being a low-impact brewery. In 2013, the United States Green Building Council took notice, and after a nine-month observation period, they awarded Mother Earth Brewing a Gold certification in the LEED® program. Mother Earth became the first production brewery in the country to achieve the Gold rating. Their Dimensional Universe hazy IPA is brewed with New Zealand Nelson Sauvin, Mosaic, and Strata hops for notes of ripe berries and passionfruit.