Peaks and Pints Pilot Program: Canada Day On the Fly

Today is Canada Day, which is when Canadians celebrate the Fourth of July. (Sorry about that. Peaks & Pints is pretty sure Dave Barry made the same joke, like, 25 years ago. It wasn’t funny then, either.) At any rate, to honor our neighbors to the north, and their “one nation in 1867” anniversary, we suggest a to-go flight of Canadian beer. Hmm, but what Canadian beer do we choose? We called Anne Murray, Gordon Lightfoot, Corey Hart, a Zamboni driver, and a braying moose for their opinions. Oh, sit back down on the chesterfield, you rangy Canadians, Peaks & Pints is, again, only teasing. We tease because we love. The answer is so obvious: Unibroue. Unibroue founders André Dion and Serge Racine took beer brewing techniques used by Belgian trappist monks and brought them to North America. After acquiring La Brasserie Massawippi brewery in Lennoxville, Quebec in 1990, the Quebec team brewed their first abbey ale. A few years later, they were shipping their beer internationally. Even after Sleeman purchased Unibroue in 2004, and subsequently by Sapporo in 2006, Unibroue has maintained the culture and flavor of a craft brewery. Enjoy Peaks and Pints Pilot Program: Canada Day On the Fly, a to-go flight of Unibroue beer.

Peaks and Pints Pilot Program: Canada Day On the Fly 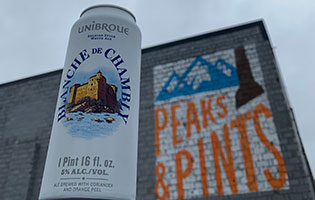 An ode to a city in the southwestern region of Quebec, Blanche de Chambly is a traditional Belgian style witbier refermented and brewed with coriander and Curacao orange peels. Pouring a light golden haze with a fine carbonation, the nose gives a distinct sweet and sour aroma, settled by a hint of coriander. The sweetness carries through to the taste with delicate spice notes blanketed in citrus flavors reminiscent of orange and lemon. There’s also an additional yeast character, a signature of Unibroue, known for brewing beers on lees, which means it’s rested on the residual yeast deposits, fats and proteins that settle to the bottom of an aging vessel after secondary fermentation.= 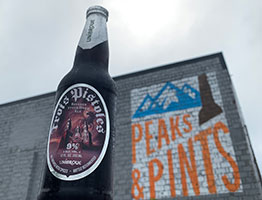 This Belgian style dark strong ale pours soft brown in color, milder than its name would suggest. Then you bring it to your nose — bam! The first blow arrives with the brown sugar smell. Pow! The second shot, a coffee bitterness. Boom! A sip of the beer packs a final punch with an alcoholic taste, balanced with a nutty sweetness, roasted malt, ripe fruit and dark spices with a smooth finish like an old port wine. 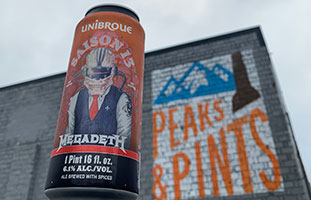 SAISON 13 is a nod to Megadeth’s album TH1RT3EN launched in 2011 that was inspired by frontman Dave Mustaine’s fascination with the number. This distinctive saison offers the perfect combination of malt, fruit and spices punctuated by an invigorating hop flavor, and it is brewed with 13 carefully selected ingredients to offer a drinking experience as memorable as the song itself. 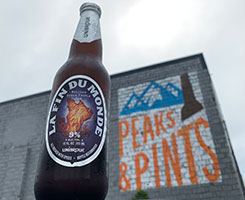 The name translates as “The End of The World.” If this beer is any indication of the end of the world, bring on the apocalypse! This Belgian-style tripel actually reminds us of the beach with the golden orange color providing the sunset, the pineapple and nut aromas giving it a tropical nose, and the strong alcoholic taste, followed by sweetness, completes the sense of drinking on the beach, minus the cocktail and the mini-umbrella. Even with its tropical vibes, La Fin du Monde upholds its light Belgian character.