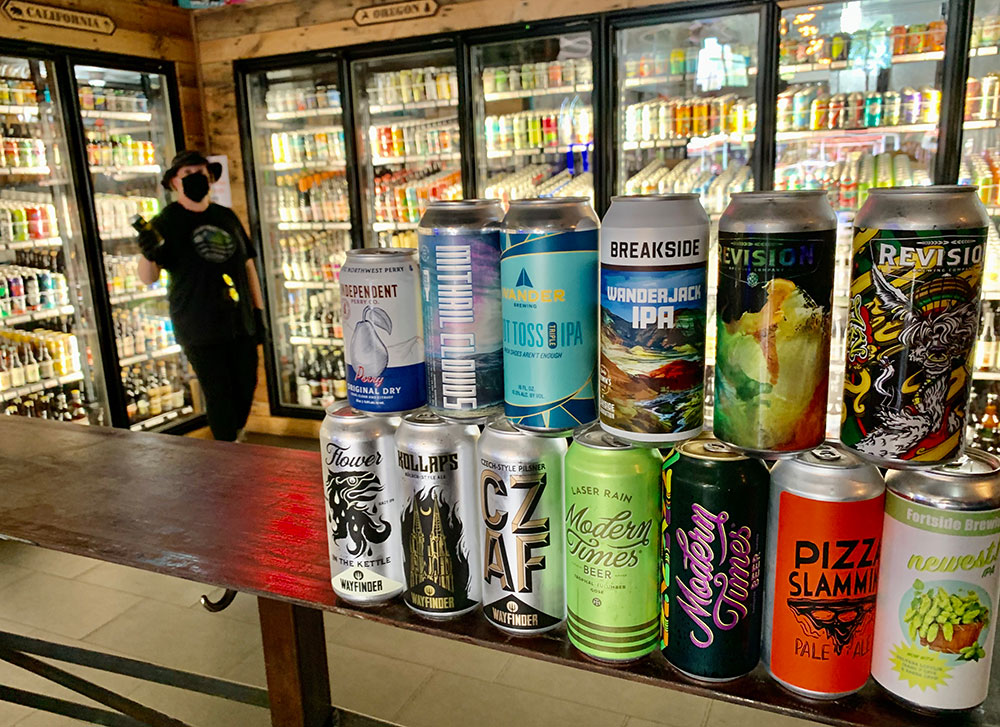 Peaks and Pints New Craft In Stock 7.8.20 showcases new craft beer and cider in our cooler. Give us a call at (253) 328-5621 and we’ll have a six-pack ready curbside, windowside or barside — or safely walk our giant cooler. Check out our full list of cooler beers and ciders here. Cheers!

WANDERJACK IPA: Breakside Brewery’s 10th anniversary collaborations continues with Tyler Brown and his Barley Brown Beer’s crew in the Portland house with three of the fruitiest hops around — Strata, Mosaic, and Azacca — along with a touch of Simcoe to anchor the beer in classic dank and catty West Coast flavor. 7.1%

NEWEST IPA: Brewed with Sultana Lupulin, Idaho 7 Cryo, and Sabro Cryo hops for all the pine, plus pineapple, bright citrus notes and a fruity nose. 6.8%

ORIGINAL DRY: Crisp, clean and citrus-y perry made from Pacific Northwest pears and served in a sweet-ass can. 5.8%

LASER RAIN: Brewed with Culmination Brewing, this crushable gose leads with cucumber lasers backed by a guava and lime rainfall. 5.6%

HAZY LIFE: This is the good life, full of friends, great experiences, and super tasty haze. Highlighting Mosaic and Cashmere hops, this brew delivers notes of passionfruit, peach, lemon, and guava over a supah smoove malt base. 7.75%

MYSTIC TOPAZ: This hazy IPA chills with Citra and Mandarina Bavaria along with a lil’ dose of Galaxy hops for good measure, making it heavy on the sweet-orange side of the flavor spectrum. 7%

MITHRIL CLOUDS: A hazy IPA brewed with a simple malt base, a dry hop with Pahto (HBC 682) and Mosaic, and two additional dry-hop additions of Mosaic for a floral and tropical nose and zippy fruit flavor. 6.6%

BOOT TOSS IIIPA: A three hour boil on brew day brings mouthfeel and sweet candy notes to balance a heavy-handed blend of Citra, Cascade, and Centennial hops. This West Coast triple IPA stomps across your pallet leaving tracks of lingering bitterness like a Sasquatch in moonboots. 10%

CZAF: Wayfinder Mastermind Kevin Davey decocts the F out of this classic Czech pilsner’s mash for a beer with exceptional malt character and a crisp, slightly bitter snap. 4.9%

FLOWER IN THE KETTLE: Hazy IPA with kettle loads of juicy Mosaic hops balance between Amarillo and grapefruit forward Simcoe. 6.7%

KOLLAPS: This Kölsch is a featherweight blonde, fermented at regular ale temperature (warm) to produce the yeasty, floral aromas, then cold-conditioned for a complex beer that’s light enough to make Hofbrau Helles feel like a loaf of soda bread. 4.7%