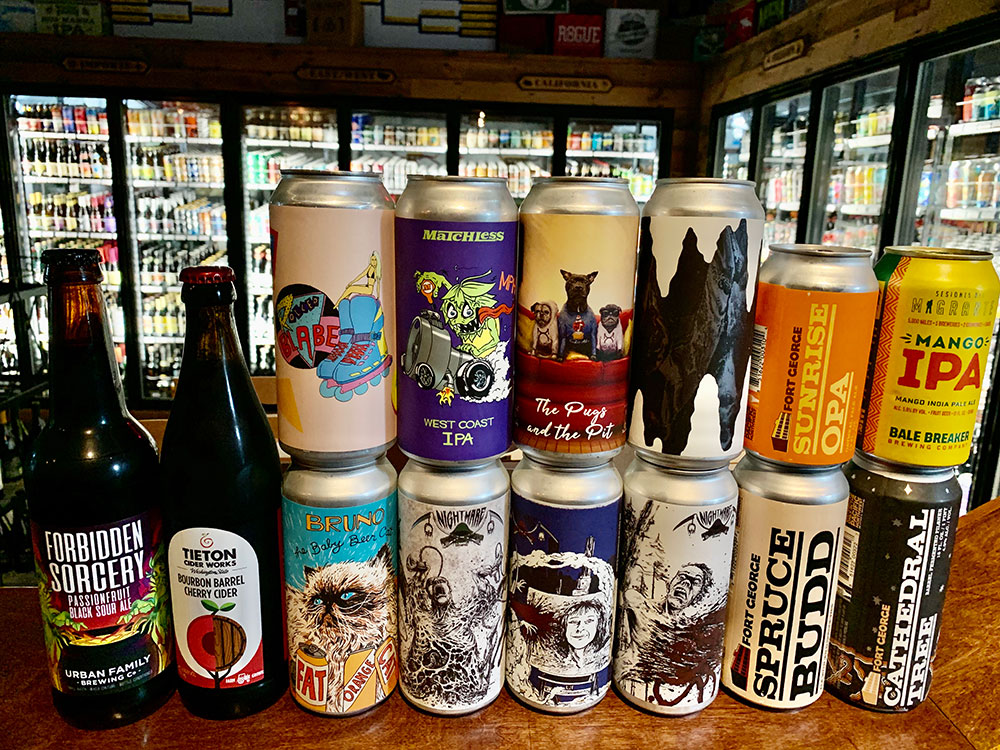 TERPY GALAXY: Hops and marijuana both contain terpenoids, compounds that give the plants similar characteristics. In fact, both fall into the taxonomic family Cannabaceae, so it follows that you could create a fairly stinky beer with the right treatment of the right hops. Hops don’t get you high, but in smell, taste and appearance, they often feel just about as … dank. Based in Tulsa, Oklahoma, American Solera is a blend of unique beers created by brewer Chase Healey, who is the guy that started Prairie Ales. The double IPA, Terpy Galaxy, gets its name from terpines — basically the essential oils found in hops — and Galaxy, a type of hop known for having the highest percentage of essential oils in the industry. Galaxy is often described as having a passion fruity character along with aromas and flavors of clean citrus, pineapple and tropical fruit — the last two characteristics are on full display with this double IPA. 8%

SPRUCE BUDD ALE: Fort George picked hundreds of pounds of spruce tips, then with their aching arms they merged the tips with pilsner malt for a spiced beer with notes of spruce, citrus, and more spruce. 5.5%

SUNRISE OATMEAL PALE: This smooth and creamy oatmeal pale ale has returned with a crisp, citrusy finish from a healthy amount of Amarillo and Centennial hops. 5.2%

ROLLER BLABE: A smooth and balanced double IPA dry-hopped with Mosaic, Simcoe, and Galaxy hops for a dank and fruity combination. One sniff and you’ll be painted in animal print spandex and sporting a side pony tail. 8%

MPH WEST COAST IPA: MPH West Coast IPA is some kind of crazy take on how Matchless grew up brewing and drinking IPAs around here! After all, hops still rev our engines in the Pacific Northwest. Huge in citrus candy notes with a balanced bitterness and plenty of hops to remind you of the Northwest’s glory days, MPH is dry so you can keep on drinking. 7.1%

BOURBON BARREL CHERRY CIDER: This cider has juice from handpicked Washington state cherries and receives its deep vanilla and plum character from aging in bourbon barrels. 6.9%

THE PUGS AND THE PIT: The plaid-wearing outdoors enthusiast Jason Stein would leave his Upper West Side apartment in New York City and travel to Long Island to homebrew barrel-aged imperial stouts and barleywines in his parents’ garage. Today, he’ll brew his Timber Ales in Connecticut on 12 Percent Beer Project’s big system. His The Pugs and the Pit imperial stout is brewed in collaboration with his friends from Moksa Brewing Company. This was stout was aged on Ugandan vanilla beans and cocoa nibs before being canned for your pugs and pitbulls to knock around on the floor. 12%