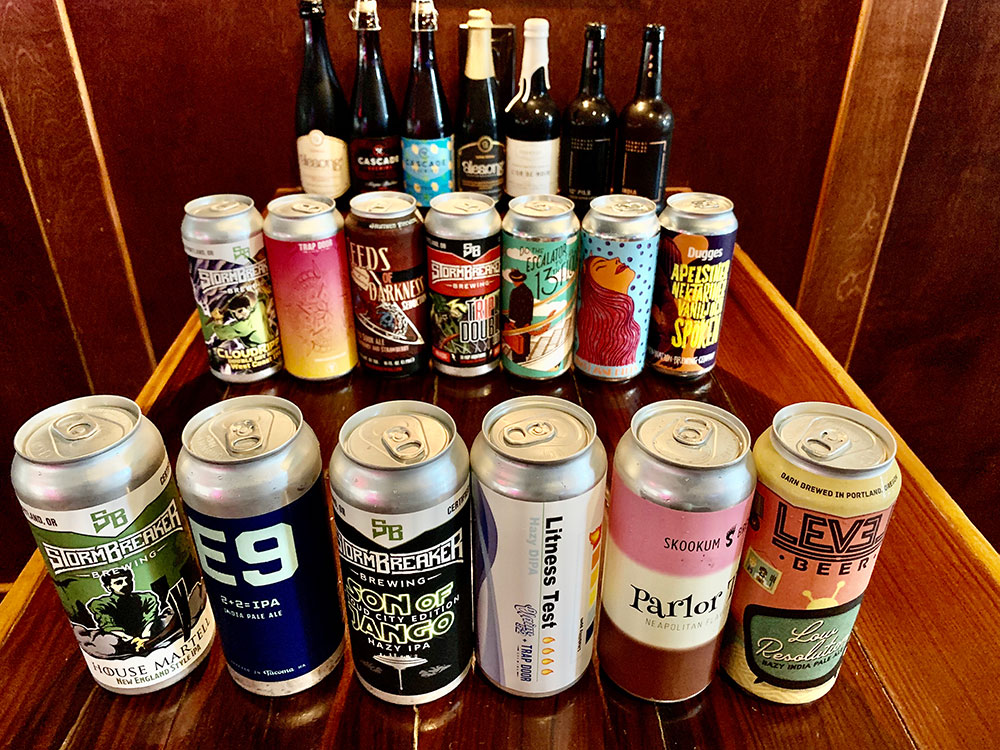 FRAMBOISE: A golden sour base is aged in retired wine barrels with heaps of raspberries from Stahlbush Island Farms for a beautiful magenta hue, a jammy start on the palate with a dry and crisp finish. 7.4%

SENOR RHINO: The Eugene, Oregon, brewery’s imperial milk stout is aged for 6 months in freshly dumped Heaven Hill Bourbon barrels, layering on flavors of vanilla and a hint of cinnamon and a slight warmth from the alcohol. Then, Alesong adds ancho chiles from their local Latino market, as well as Cassia cinnamon and Tahitian vanilla beans from Mountain Rose herbs, and Vietnamese cocoa nibs from Chocolate Alchemy in Eugene. Expect cinnamon, vanilla and cocoa on the nose, followed by some heat and rich chocolate flavors intertwined with hints of cinnamon and vanilla. 11%

CITRUS NOYOUX 2019: Citrus Noyaux consists of a sour blond ale aged in oak wine barrels for up to two years with fresh orange, grapefruit and lemon peels, and apricot noyaux. Cascade extracted noyaux kernels from the pits of Oregon-sourced apricots by hand and added them to the beer, imparting notes of almond and maraschino cherry that are complemented by the juicy fruit flavors of the citrus peel. 8.5%

2+2=IPA: Slightly hazy IPA brewed with a majority of 2-row barley and a mix of malted oats, torrified and malted wheat. Late hop additions in the boil keep the bitterness low and after primary fermentation a double dry hop Azacca, Mosaic, and Southern Hemisphere Motueka combine with the juicy yeast characteristic to add tropical fruit, citrus and stone fruit aromatics. 6.2%

DO THE ESCALATOR TO THE 13TH FLOOR: Double IPA brewed with five different hops that hits the nose with candied watermelon, cantaloupe, and subtle citrus to balance slight orange sweet malt. 8.3%

INDIA PALE ALE: This IPA brings the hops without being buried by bitterness. The biscuity, lightly sweet malts and fruity, dry yeast notes impart an herbaceous aroma to give the ale a complex nose of peach, tangerine, and red cedar. 5.8%

SEEDS OF DARKNESS: SEDUCTION: This sexy rouge colored beer will seduce you with its tantalizing strawberry and raspberry fruitiness. 6.7%

LOW RESOLUTION: This hazy IPA is big, juicy and tropical that will fill your glass with citrus hop flavors and aromas. The resolution might be terrible, but the flavor isn’t. 6.7%

PINEAPPLE HEFE: This wheat ale is infused with pineapple juice for a pineapple aroma paired with a subtle hint of coconut and pear. The sweet pineapple and pear flavor lingers on the tongue after the mild flavor of malt disappears. 5.4%

HOUSE MARTELL: House Martell is the ruling family of Dorne, the southernmost region of Westeros and the only region of Westeros to successfully resist the conquest of Aegon the Conqueror. Yes, indeed, StormBreaker House Martell is a Game of Thrones themed Single hop hazy pale ale brewed exclusively with Citra hops for aromas of grapefruit and melon. It’s light bodied, yet juicy and finishes clean; indicative of the house it is named after. 6.5%

SON OF JANGO: The baddest bounty hunter in the galaxy deserves the baddest IPA. Brewed with Falconer’s Flight, Galaxy, and Mandarina Bavaria hops, this juicy, hazy IPA has notes of tropical fruit and a mean juicy, dank bite with a dry finish. 6.7%

TRIPLE DOUBLE: Achieving a triple double in hoops is impressive, but achieving it in your beer is even better. With 10 hop additions of three hop varietals, Mosaic, Citra, and Amarillo, this beer scores on your palate, rebounds in your nose with big aromas of grapefruit citrus and pineapple, and is assisted by the punchy, juicy citrus flavors to balance the slight upfront bitterness and big. 8.5%

LINK: More goodies in the Peaks and Pints cooler