Peaks and Pints Jolly Roger Party and History After Hours

Peaks and Pints Jolly Roger Party and History After Hours

Peaks and Pints Weather Guy has today’s weather for the Hoh River Trail in the Olympic National Forest.

Today’s Morning Foam was compiled while watching the correct way to use a can opener. … 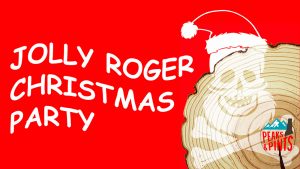 Maritime Pacific Brewery’s Jolly Roger Christmas Ale is all about tantalizing mysteries that make science and the rational mind twitch and hiccup, then shrug and think oh man this awesome seasonal is a truly original holiday brew combining rich malt character with a blend of fresh Northwest Chinook and Cascade hops, yo ho ho. At 6 p.m., Thursday, Dec. 6 in Peaks and Pints bottle shop, taproom and restaurant in Tacoma’s Proctor District Jolly Roger will receive a giant hug in the form of a party. In addition to this year’s Jolly Roger Christmas Ale, expect other tapped Jolly variants such as Bourbon Barrel Jolly, Spruce Jolly and Port Barrel Jolly.

If you’re jolly for Jolly door prizes then you have to sing a Christmas carol … with Maritime Pacific founder George Hancock.

New Belgium Brewing’s brand new Up Next Series taps into the brewery’s tradition of innovation by offering easy-drinking, unique and flavor-bending beers that reflect evolving trends in food and drink. Brut IPA, a bubbly and effervescent brew perfect to ring in the New Year, is first up in the Up Next Series. Inspired by sparkling wine and partner Dick Cantwell’s foray into brewing Brut IPAs at sister brewery Magnolia Brewing in San Francisco, New Belgium’s Brut IPA pours a bright and bubbly platinum blonde with white grape and tropical aromas that give way to a refreshingly dry finish.

Dogfish Head is truckin’ into 2019 as it reunites with the iconic Grateful Dead band to bring back a much-anticipated collaboration beer, American Beauty. This synergetic union brings fans a pale ale that shares a name with the popular 1970 Grateful Dead album, American Beauty, featuring hits like “Friend of the Devil,” ”Sugar Magnolia,” and “Truckin.’”

Hop in the car. The Big Bad Baer, Telegraph Brewing’s first double-barrel-aged, imperial stout has emerged from its long slumber in both whiskey and port wine barrels and will roar into the California market just in time for the holidays. This massive beer was brewed as a collaboration with Epic Brewing, inspired by their well-known Big Bad Baptist and named after Telegraph’s Head Brewer, Peter Baer. Bad Baer will be exclusively released at the Telegraph taproom on Dec. 7. The beer will be distributed across California in craft beer bars and select stores in the weeks before Christmas. Only 325 cases were produced, and supply is limited.

CRAFT + BREW: HISTORY AFTER HOURS, Washington State History Museum: Try your hand at many different maker projects while you enjoy craft beers from Ghostfish Brewing, Harmon Brewing, Narrows Brewing and Three Magnets Brewing. Learn about each style of craft beer along with its historical significance to the area while creating your own works of art. You can even make your own wrapping paper to share your works as holiday gifts. 7-10 p.m., 1911 Pacific Ave., Tacoma, $25 door