Sweat dripped off our foreheads as we sipped Double Mountain Westerly Pilsners. The pilsner bottles casted a long shadow as we lurched over picnic tables outside Double Mountain’s cider facility. We spent the early October day beneath a cloudless sky picking apples for our first Peaks & Pints house cider. The brewery staff tossed jokes as we waited for the rest of our party — Double Mountain founder and owner Matt Swihart, his sales director, Andrew Russo, and our brewery rep, Coco Patten. “Where are they?” asked cidermaker Ryan Carnall. “Did they dump the apples?” We laughed not anticipating our house cider would later be named Peaks and Pints Double Mountain Tossed Apples Dry Cider.

We were a small apple picking crew, thanks to the coronavirus messing with staffing at our craft beer bar, bottle shop, and restaurant in Tacoma’s Proctor District. By now, though, most of the staff has spent time with our home away from home, Double Mountain Brewery & Cidery, in Hood River, Oregon. In spring 2015, Peaks co-owner Pappi Swarner met Swihart during a Portland Craft Brewers Conference field trip to Hood River. December 2016, two months after Peaks & Pints opened, we hosted the official Western Washington release party for their Dry Cider. Nov. 1, 2018, we tapped Double Mountain Cool Camp IPA for a year-long run as our house IPA, which we helped brew. We attend their yearly anniversary parties every St. Patrick’s Day Weekend (last March marked 14 years). If we’re in Hood River, or on our way to Bend or Mt. Hood, we stop to hang out with the Double Mountain staff, including brewer and former Tacoman Matt Coughlin, whom we have known for years as the front man for his band, Matt Coughlin & the Growlers. Columbia Gorge hiking, biking … long story long, we felt at ease hanging outside the Double Mountain cider facility waiting for our brewery/cidery friends.

“You’ll never guess what happened?” Russo quipped as he exited his van.

“Yup, Swihart took an unconventional hard turn with the tractor and the entire bin spilled,” Russo replied trying to hold back laughter. 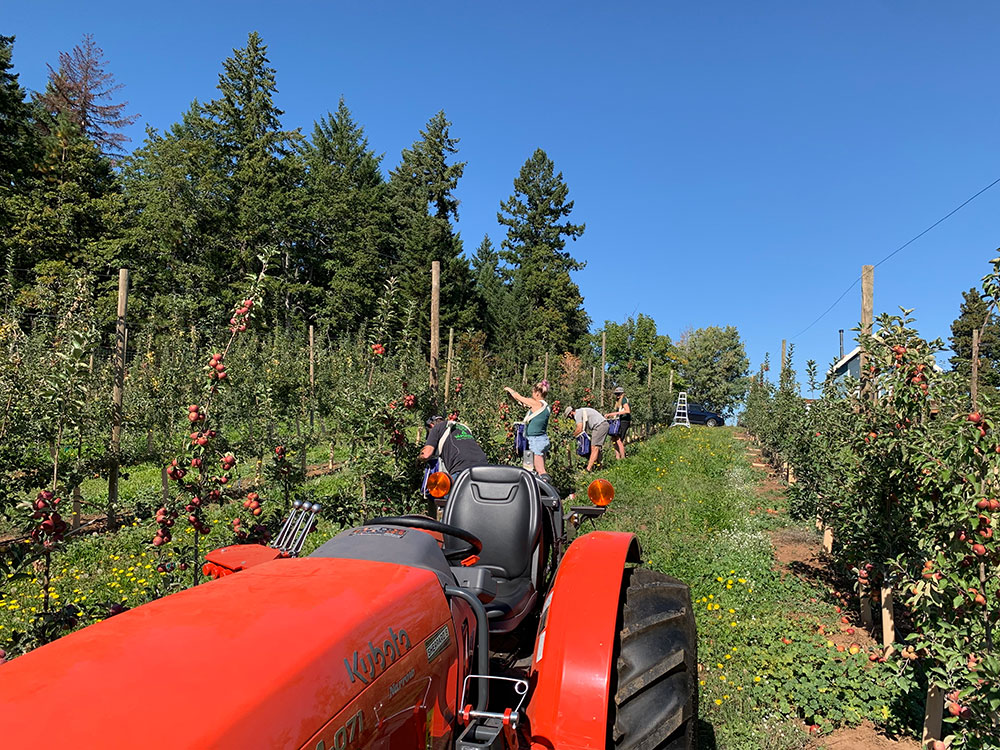 A year ago, Russo approached Peaks with the house cider idea. But the coronavirus did its dirty work with Double Mountain’s logistics preventing us from tapping the cider during our fifth anniversary party Nov. 1. A one-two punch with our new Old Schoolhouse Between Peaks house IPA would have been epic, but now we can throw two parties!

Around lunchtime, Oct. 1, 2021, the Peaks & Pints caravan pulled into Swihart’s Double Mountain Orchards for lunch Oct. 1, 2021 in the Hood River Fruit Loop, which sits in the beautiful Hood River Valley at the foot of majestic Mt. Hood. Twenty-nine or so fruit stands and orchards offer a variety of ciders, wines, fruits, vegetables, flowers, and food. Swihart’s orchard sits above the Fruit Loop between views of Mt. Hood and Mt. Adams, thus the name. It’s a stunning view, especially on a clear, sunny day.

Swihart oversees 25 varietals of cider apples, which we picked two of the six varietals in Tossed Apples — Golden Russet and Dabinet. Coco fed us fat burritos. Russo DJ’ed off his phone. Swihart offered a steady stream of apple wisdom. Four hours we all picked apples, tossing them into fruit picking bags, which we tossed into bins that hold 900 pounds of apples. Double Mountain Orchards can fill 100 bins. With a simple twist of the stem the apple became part of the process. If we dropped an apple, it’s journey abruptly ended. We’ve made five house beers since are opening day, but picking apples offers much greater gratification than tossing hops into a kettle, although with more sunburns. 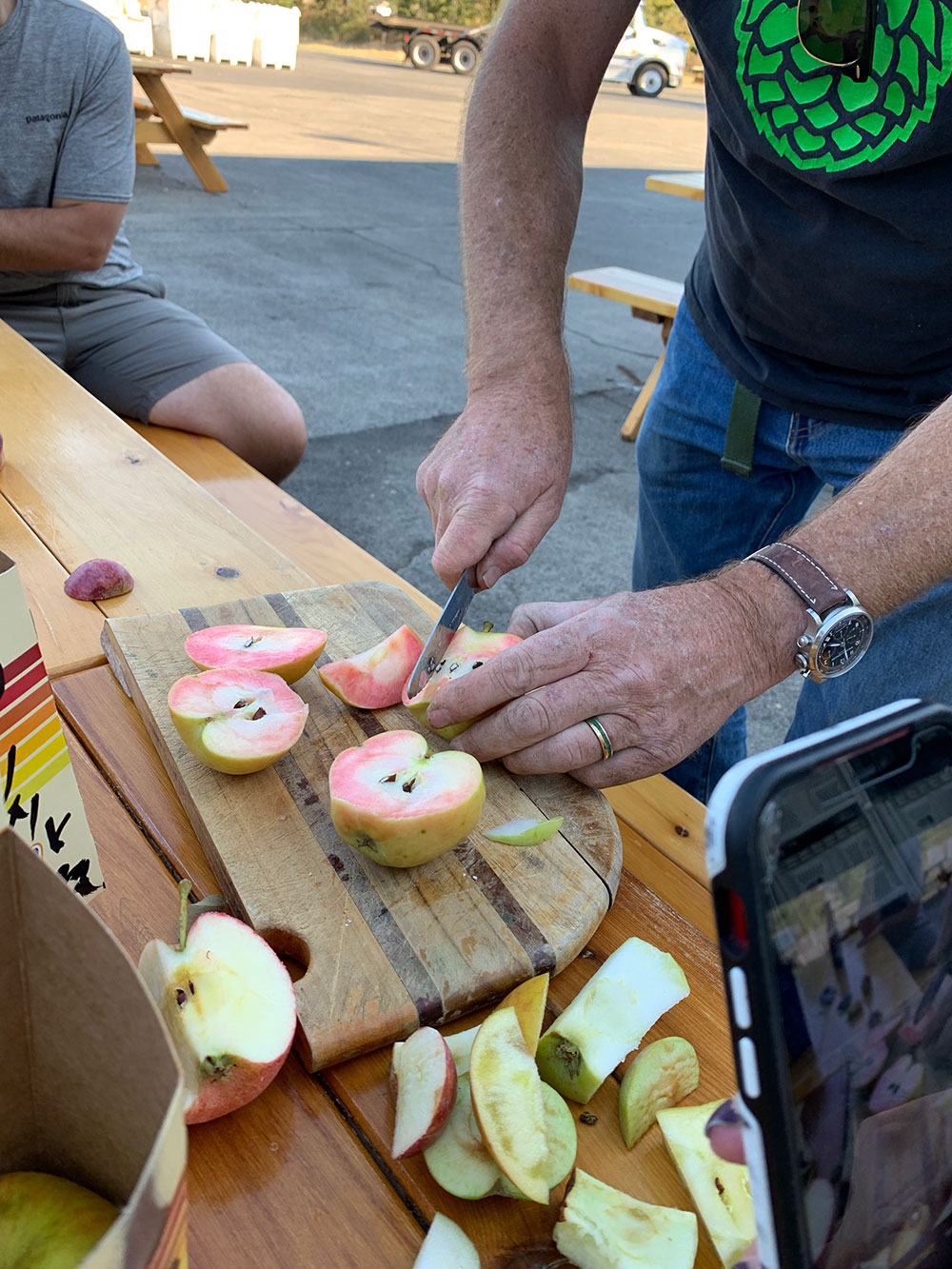 Eventually Swihart’s pick-up arrived at his cider facility. After a quick tour inside, we returned to the picnic tables to create the cider recipe. After tasting around 12 varietals, plus cheese and crackers, we decided on varietals Green Emerald, Golden Russet, Dabinet, Kingston Black, Pink Pearl, Ribston Pippin for our cider. Swihart recommended Enartis ES 181 yeast as it’s used to make white wines for strong varietal aroma expression.

“This cider is delicious,” says brewer Coughlin. “When comparing it to our Dry cider, this one is perceivably sweeter on the pallet, but on gravity, it’s on par. There’s a little chai spice in there, where I pick up a little cardamom and vanilla, along with something else I can’t quite put my tongue on. The brix on the selected apples leaned toward the higher side, bringing the final ABV to around 7.3 percent. Careful though, it sure goes down easy.” 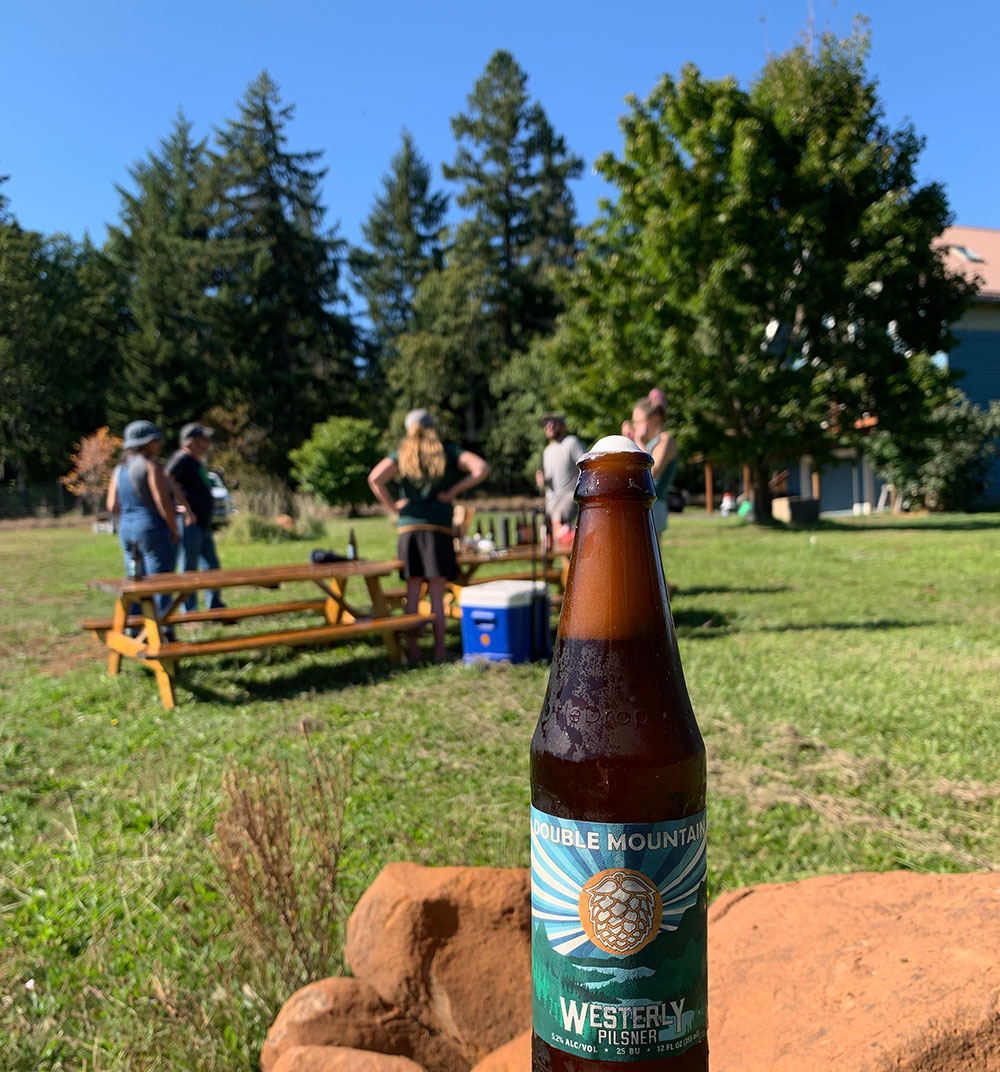 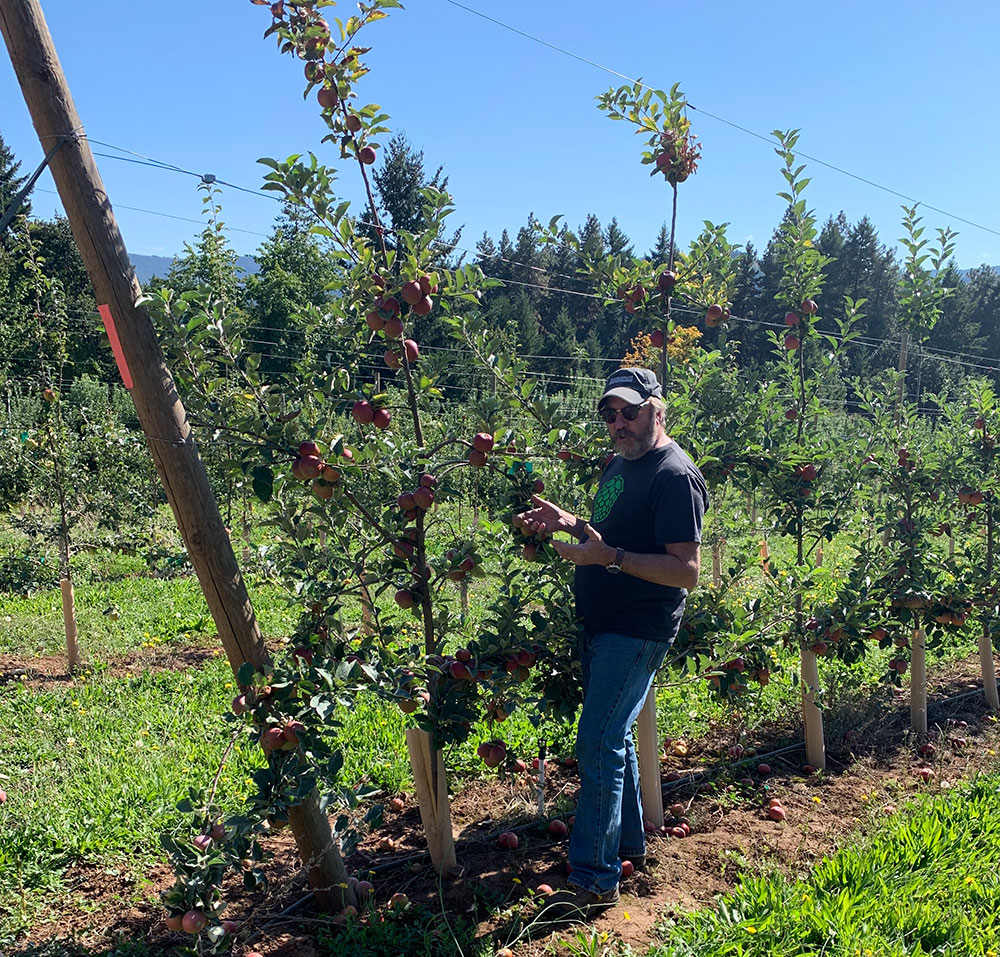