Peaks and Pints Belgian Beerloo 2020: Beer Arnolds On the Fly

Every July 18, locals in Brussels take to the streets for the “Day of Beer,” a raucous parade in honor of their beloved national beverage and Arnold. No, not Schwarzenegger, Palmer or Matsuo “Arnold” Takahashi, but rather Saint Arnold of Metz, a saint of the Roman Catholic Church and the patron saint of Brewers, as well as Arnold (Arnoul) of Soissons or Arnold or Arnulf of Oudenburg (ca 1040–1087), the patron saint of hop-pickers and Belgian brewers. We honor the Arnolds with three beers from Belgium’s Brouwerij St. Bernard in today’s to-go beer flight, Peaks and Pints Belgian Beerloo 2020: Beer Arnolds On the Fly.

Arnold  of Soissons received the nametag because he preached in the hop-growing region of Brabant, in what is now Belgium. Hops became more widespread when a Belgian princess married a Kentish prince and the dowry included land across from the Affligem brewery. Belgians reportedly sent the first hops to England for use in making beer. Anyhoo, Arnold of Soissons pulled his beer proliferation number after a monastery roof collapsed in Flanders, destroying the monks’ supply of beer. With only a few sad barrels remaining, Arnold asked God to lend a hand. The barrels multiplied, the monks and townsfolk rejoiced, and Arnold was popularly canonized on the spot. Arnold of Soissons is often confused with Saint Arnold of Metz and the same miracles, therefore, St. Arnold’s Fest Day, July 18, is associated with both of them depending on the source. To skip past the confusion today’s to-go beer flight is simply called Peaks and Pints Belgian Beerloo 2020: Arnold of Soissons On the Fly. OK, that’s not so simple. We added “Belgian Beerloo” in honor of our annual Belgian beer week celebration, which, obviously, is postponed this year. We could have called call it … never mind. …

Peaks and Pints Belgian Beerloo 2020: Beer Arnolds On the Fly 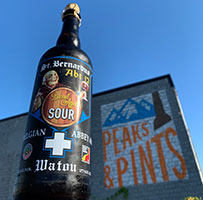 Abt 12 Barrel Aged Sour is the Belgian brewery’s quad recipe but rested in oak barrels for 3 years. This aging lets the beer go sour in a natural way. In June 2019 the beer was blended with freshly brewed Abt 12 then sent to our craft beer bar, bottle shop and restaurant in Tacoma’s Proctor District. The beer has a fruity, sour aroma followed by a balance between malty and bitter. Remarkable is the absence of alcohol flavor. The acidity in the finish very well masks the gravity of the beer. 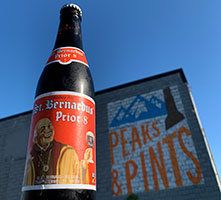 Between 1946 and 1992 the St. Bernard brewery brewed the beers of the Sint-Sixtus abbey in Westvleteren. In 1992 production reverted to the abbey of Westvleteren. By some mathematical equation this means the recipe for the St. Bernardus Prior 8 originated in 1946. And to this day, this abbey beer wears the original Westvleteren yeast. On the nose, expect sturdy banana esters, moderate toffee-like malt and slight clove. It drinks like a dubbel with fruit esters (light raisins, banana, and clove) that finds a spicy counterpoint in sharp black pepper. Subtle earthy hops punctuate these malty, yeasty notes as the beer washes back. 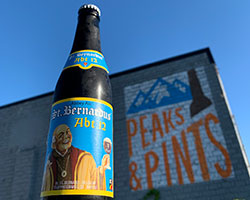 The Abt 12 is a classic Belgian dark quadrupel brewed since 1946, on the basis of the original recipe compiled by the Westvleteren monks. The Abt, or Abbot, is the highest-ranking monk in the abbey; so perhaps it’s no surprise that the brewery sees the Abt 12 as the highest-ranking amongst abbey beers. It hits the nose with banana, tropical fruit, raisins, spices and rum. The flavors come through as intensely fruity, with notes of banana, pineapple, as well as spicy clove, añejo rum and anise. Throughout the sip, spicy pepper and black licorice counter the sweetness before a flash of bitterness segues to the beer’s enduring dry finish.