Yes, another Valentine’s Day is upon us. Obvious expectations on this “special” day include the following: grumpy singles, unsavory public displays of affection, overly excitable girlfriends, an arsenal of disgruntled Hallmark employees, and, of course, lots and lots of chocolate. But before Peaks and Pints goes on, let us anticipate a few of your nagging questions. First, yes, chocolate is indeed an aphrodisiac! And, no, it’s not all right to buy her (or him) the Snicker’s Family Pak and call it a night. We hate to break it to you, but that’s just not worthy of your Valentine.

Peaks and Pints has more than 600 different craft beer and cider in our cooler. Below are few bottles can cans that rolled in this week.

Before breaking out the Hershey’s syrup for that midnight striptease, get your Valentine’s groove on with craft beer and cider. …

Ex Novo Brewing’s Damon Stoutamire “Rip City Stout” pays tribute to the Portland Trail Blazers hoop legend. If Stoutamire were this beer, he’d smell of cocoa, espresso and overripe fruit. It’s a medium bodied stout with sweet coffee and bitter chocolate off the bench and notes of dates and rich plum walking off the floor. 22oz, 6.5%

This beer from Founders, those agents of darkness, hits each part of the imperial stout holy trinity with vigor: It’s brewed with oatmeal, coffee beans and real chocolate. I know, it sounds like a KFC Famous Bowl in a bottle. But the Breakfast Stout is no failure pile: It’s harmonious, with charred cacao bitterness, oatmeal richness, and bright coffee notes. 12oz, 8.3%

Pelican Brewery has been brewing craft beer for more than 20 years. They know massive additions of Mosaic, Citra and Centennial hops will deliver a bright citrus-tropical aroma and notes of ruby red grapefruit and sweet pine. Success. 12oz, 9.5%

Dogfish Head has been experimenting with fruit and citrus IPAs since the 1996 Aprihop release. Actual orange peel, lemon flesh and blood orange juice sits inside the Flesh & Blood can, resulting in a zesty ale, balanced with Northwest hops. 12oz, 7.5%

Shmaltz took its Bittersweet Lenny’s R.I.P.A. Rye IPA — brewed in honor of foul-mouthed comic Lenny Bruce’s death in 1966 with “an obscene amount of malts & hops” (eight grains, substantial amount of rye and seven different hop varieties, not counting the two varieties used during dry-hopping) — then aged it in rye whiskey barrels for two years for the perfect blend of charred rye whiskey barrel, caramel, and vanilla notes to be infused into the beer. 22oz, 10%

This is Scuttlebutt Brewing’s 10th year of brewing the Old No. 1 Barley Wine. The 2005 and 2008 versions were awarded bronze medals in the English Barley Wine category of the North American Beer Awards. The 2009 version won a World Beer Cup Gold and has since been awarded a silver and bronze medals in the NABA in the same category.  It’s deceptively subtle, strong hints of raisin, maple, vanilla, and black current work together in pleasant harmony. 12oz, 13.33%

Three Creeks Brewing‘s beefy Northwest-style IPA is built on a base of German Munich and British Maris Otter malt then heavily hopped with Columbus, Cascade and Cluster. Crystal, Special B and Carabohemian malts along with a three-hour boil contribute loads of plum-like, dark fruit flavor. 22oz, 8.3% 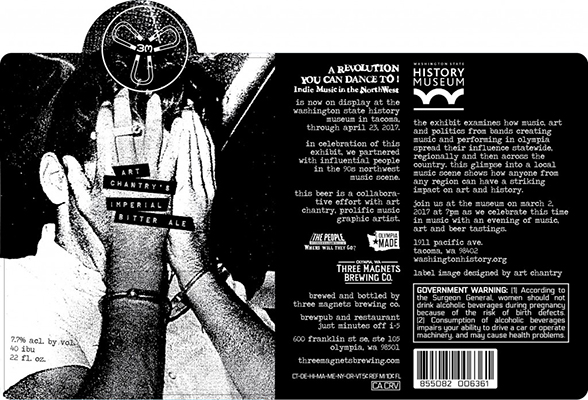 What better way to honor a rebellious, outspoken and prolific legendary graphic artist than to brew an imperial bitter in his name. Former Rocket magazine art director Chantry helped to visually define the late 1908s and early 1990 Seattle music scene with record sleeves and poster art. Before his Seattle stint, Chantry lived in England hanging with friends involved in Britain’s CAMRA movement, the campaign to save real ale in pubs. Chantry provided a basic direction for the beer and, naturally, designed its label. 22oz, 8.2%

Cheers to this collaboration with Northish Beer Co. With a whisper of smoke, Because Ghosts tantalizes the taste buds with a crisp acidity imparted by a combination of acid malts and extended cellaring with a mixed culture of Brettanomyces and Sacchraomyces. Light, crisp and effervescent, this beer is best served at 45° and allowed to warm through tasting for enhanced flavor profile. The name for the beer came from the desire to conjure the ghost of the brewers of old, when farmhouse-malting technology required most beers to be a bit smoky. 750ml, 6.3%

Three Magnets’ Second Anniversary Sour Red Rye Ale is aged in red wine puncheons for 18 months and then bottle conditioned. An aroma of mixed berry fruit emanates from the glass — attributed to both the mixed fermentation of Brettanomyces and Saccharomyces and the generous use of chocolate and rye malts. Ripened chocolate covered marionberries coat the tongue with a thin veneer of tart lychee. The subtle sourness invites you in for more and the moderate carbonation works perfectly in combination with the red wine barrel treatment. 750ml, 7.2%

… and 600 different craft beers and ciders in our cooler.