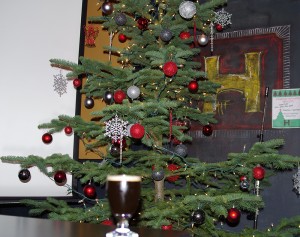 After you’ve made your list, checked it twice, and managed to buy gifts for those who’ve been nice, you still have a huge task ahead of you: wrapping them. And if presentation is important in food preparation, it matters even more in gift giving. But be forewarned: for the most part, pretty packages take time … about as long as it takes to down a pint of craft beer. Obviously.

If you’re one of the lucky few able to wrap exemplary gift packages faster than a speeding bullet, this might just not do you any good.

If you’re are a slow wrapper like me, decorating a Christmas gift while sipping one of Harmon Brewing Company’s small batch holiday beers makes sense. Wrapping a gift while sipping said beer sitting inside the Harmon Tap Room makes better sense, providing a burst of holiday-themed social reconnection so beloved by generations of yore. Wrapping a gift for 12 days straight at the Tap Room, drinking a different Harmon holiday seasonal each day, is as brilliant as the Christmas Star.

It’s the perfect activity while enjoying Harmon Tap Room’s 12 Beers of Christmas, running Sunday through Christmas Eve. A new Harmon small batch holiday beer is tapped each day. You sip and clip. You taste and tie. You gulp and tape. If you partake all 12 days, you’ll be handsomely rewarded with an engraved mug as proof of your brew dedication. Gift, wrapping paper, ribbons, bows, tape, scissors and nametag not included. The gift-wrapping is my idea.

The only issue — besides arriving with your gift-wrapping tote and the subsequent mess — you won’t know which beer is tapped until you show up, or check out Harmon Tap Room’s Facebook in the morning.

Yes, this is how I’m playing Harmon’s annual holiday gift. I’m too deep into it. I must see this absurdity through. 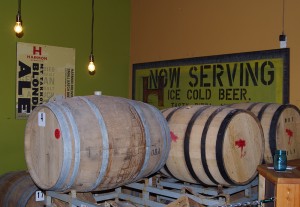 Johnny wants a pair of skates. OK, then. Maybe you’ll be sipping on a Harmon 2015 Vladivostok Russian Imperial Stout. It’s a new release for the Tacoma brewery, with high alcohol and plenty of malt character. The beer style worked for Russian czars, and it will work for you too, especially after you slice your index finger wrapping the blades.

Susie wants a sled. That’s so her. Harmon Candy Cane Porter. That could be you. Harmon head brewer Jeff Carlson mixed 13 candy canes per keg of the deep brown goodness. The peppermint is forward, almost overwhelming the roasted malt and cocoa notes. Carlson makes the world taste good.

That junior high bully who lost his two front teeth to your fist? Give his two front teeth back for Christmas. It’s probably all he wants. Include a personal note inside the small package. There in the magic — a personal apology. The real holiday juice. No apology was needed when a Harmon brewer accidently knocked out the bung on a year-old barreled sour saison. After a weekend open-air yeast party, the sour saison was ultra sour. Harmon brewers dialed it back a bit by blending it with their traditional saison for an impressive Disgruntled Farmhand Sour Saison, one of the 12 days of Harmon beers. 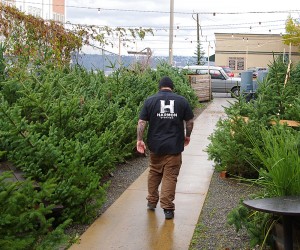 Bonus: The Harmon Tap Room has a Christmas tree lot in their beer garden. The fallen tree sprigs would be lovely accents for your wrapped gifts.

I’m finished. That’s Harmon’s 12 Beers of Christmas with a twist … and a tie and a bow and a ho, ho, ho. Let’s check the reviews of my story:

“The Forum we create for this story should break all troll records, BMB” — BeerAdvocate;