JOHN SWASEY: Live from the Proctor District in Tacoma Washington, it’s the 2015 South Sound Christmas Beer Parade. And let me tell you the City of Destiny is aglow this afternoon. South Sound breweries are parading their Christmas beers down 26th Street before hundreds of happy folks. Good afternoon, ladies and gentlemen, I’m John Swasey. If you’re a Christmas beer fan or a friend of a Christmas beer fan, Buddy the Elf, this will be an afternoon to remember. Your thoughts on that matter?

BUDDY THE ELF: I saw a dog today.

SWASEY. That’s terrific. I can’t speak for the dog, of course, but certainly, every human being along 26th Street is as excited as I am.

BUDDY THE ELF: You wrote a shiny book about Christmas beer. …

SWASEY: I did. I did. “Drunk On The Christmas Tree Lot.” I discuss Christmas beers in length. Is it a season or a style? I cover the years after Prohibition when breweries were generally prohibited from using Christmas, especially jolly, old St. Nicholas, to advertise their brands.

BUDDY THE ELF: Santa says before Prohbision, Prohchun, Pro-something … German immigrants brewed special, dark lagers for the holiday. Before that, the English served homemade wassail to Dickensian carolers singing “O Little Town of Bethlehem,” which is one of my favorite Christmas carols. 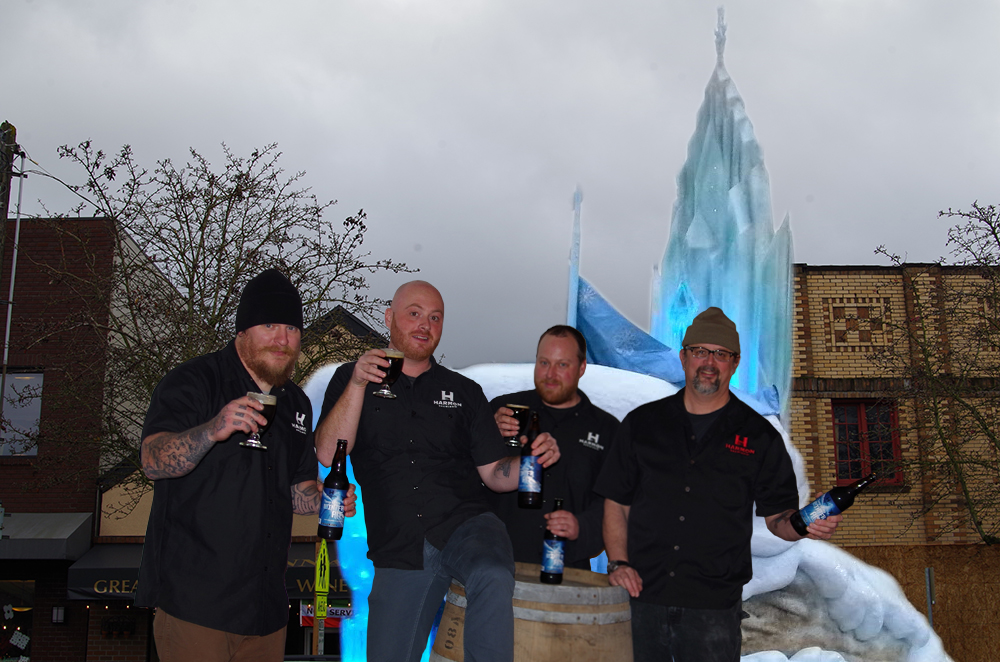 SWASEY: At the risk of finding coal in my stocking, I’d argue that Christmas beer is older than Christmas itself. Ah, looks as if Harmon Brewing Co. is leading off the parade. Harmon director of brewing operations Jesse Holder, brewery production manager Bill Lundeen as well as brewers Luke Scribner and Alex Mckay are showing off their annual Steep & Deep Winter Warmer on some sort of winter-y float. This medium bodied winter warmer hits with a smooth mouthfeel, followed by roasty malt, chocolate and citrus flavors, with some hoppy bitterness to finish.

BUDDY THE ELF: I taste a little mint in it.

SWASEY: Indeed. I’m told mocha and spruce tip versions of the Steep & Deep are available this week at the Harmon Tap Room, with a vanilla version arriving soon. 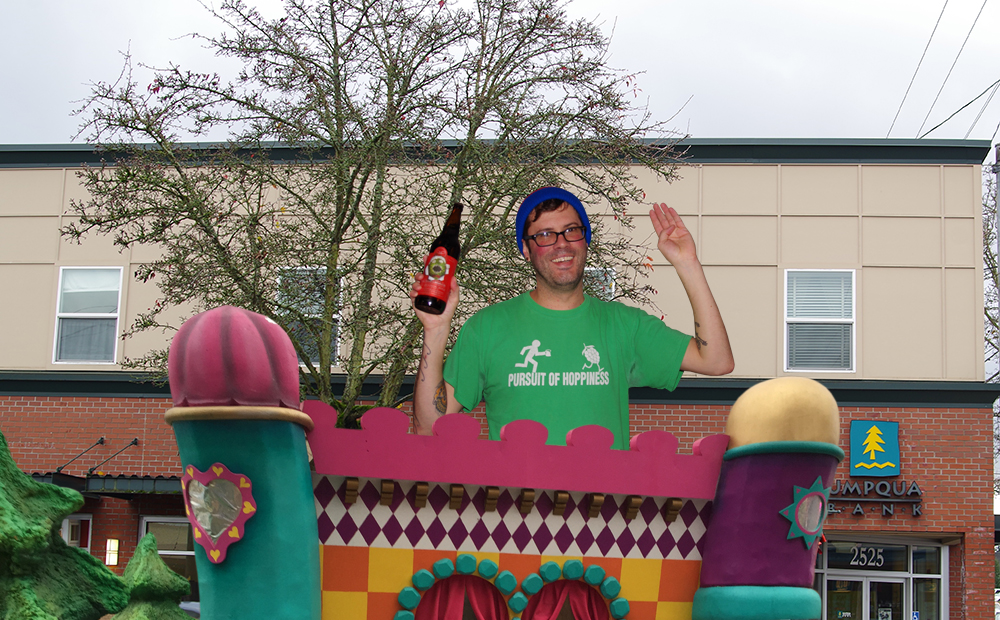 SWASEY: That’s the bottle label for Three Magnets Brewing Co.’s Wreathing Havoc Imperial Winter Red Rye Ale, a 9.4 percent winter warmer that starts in the nose with subtle hints of berries and burnt sugar, moves to the tongue with a toasted raisin and rye spice, and finishes strong with maple and pine. Wave hi to assistant brewer Jeff Stokes, Buddy.

SWASEY: Sound the alarm; here comes the Thurston County firefighters. Casey Sobol and Jason Stoltz are the founders of Top Rung Brewing Company in Lacey. Their Pyrolysis Imperial Stout, rich in malt after aging in both red wine and bourbon barrels since the end of October, is the brewery’s seasonal offering this year. The Pyrolysis will be released Saturday afternoon during Top Rung’s Ugly Sweater Party. Top Rung also looks to amp up their barrel program next year.

BUDDY THE ELF: The smiley Dalmatian on their float wearing a fireman’s hat is hilarious. 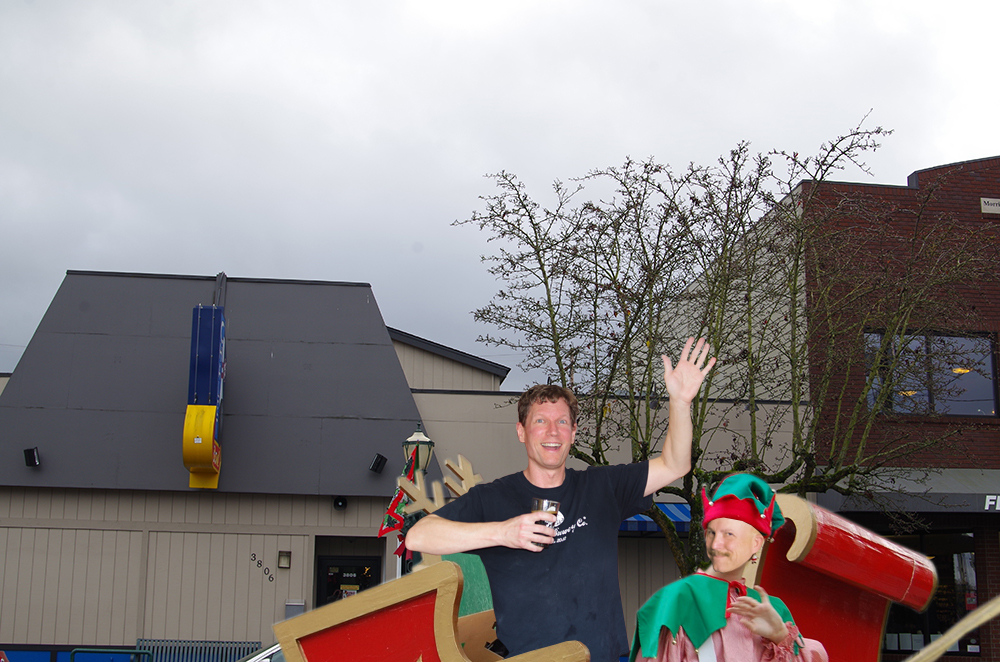 SWASEY: And here we go folks. The region’s year-round shorts wearer, Morgan Alexander. As you can see he’s proudly showing off his Tacoma Brewing Co. Black Sun, a refined Russian Imperial Stout aged for a year and a half in JP Trodden bourbon barrels. Flavors of cherry, chocolate, malt, molasses, oak and port wine will dance on your tongue, with just a slight alcohol burn.

BUDDY THE ELF: I want to dance!

SWASEY: Maybe you can at the Black Sun release party Saturday at Tacoma brewing. In addition to the 22-ounce, hand-painted Black Sun bottles, Alexander will tap four variations of Black Sun made with coffee, chili, licorice and cocoa nib.

BUDDY THE ELF: What’s a nib? I want one! 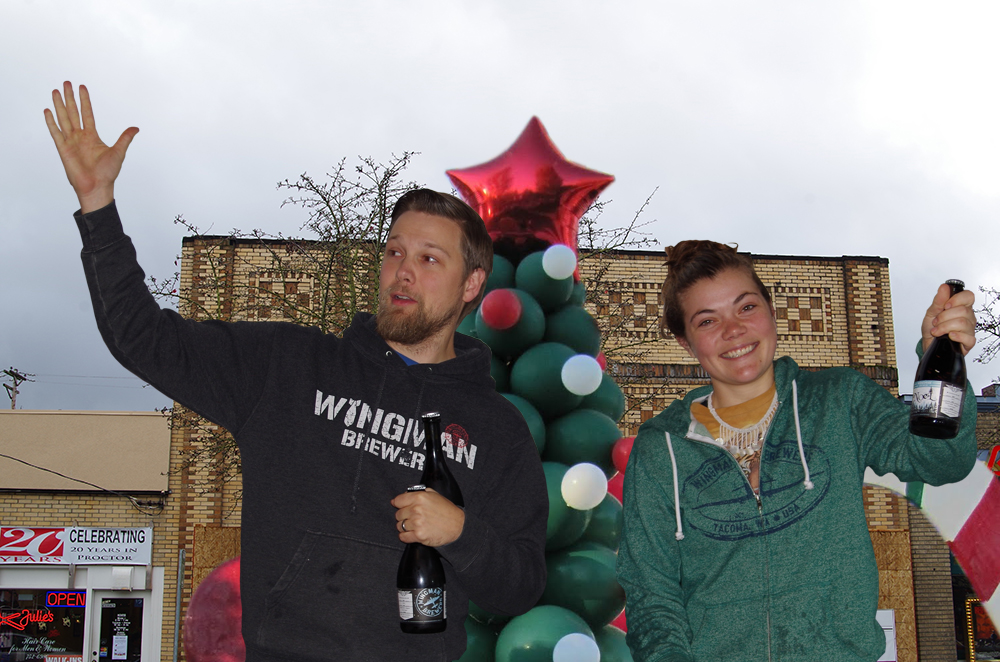 SWASEY: Wait, yes, I believe that’s Ken Thoburn and Becca Reed of Wingman Brewers. They’re waving to the crowd, showing off their Noel, a Belgian style ale with cherries. Those two blended a number of Washington barley varieties to produce something that taste akin to continental European base malt. Then they added in Belgian candidate sugar, which gave the beer its color and raisin-y plum-like flavors. It’s Wingman’s house Belgian yeast blend that gives off traditional Belgian style aromas and finishes the beer with light acidity.

BUDDY THE ELF: The yeast blend does wonders to hide the alcohol and provide the drinker with a delicious drinking experience.

SWASEY: Look at you, Buddy. Nice.

BUDDY THE ELF: Where are the ginormous beer balloon characters? Where are Hoptimus Prime, Audrey Hopburn and Honey Boo Brew?

BUDDY THE ELF: You made that up.

BUDDY THE ELF: That one guy has really long hair. 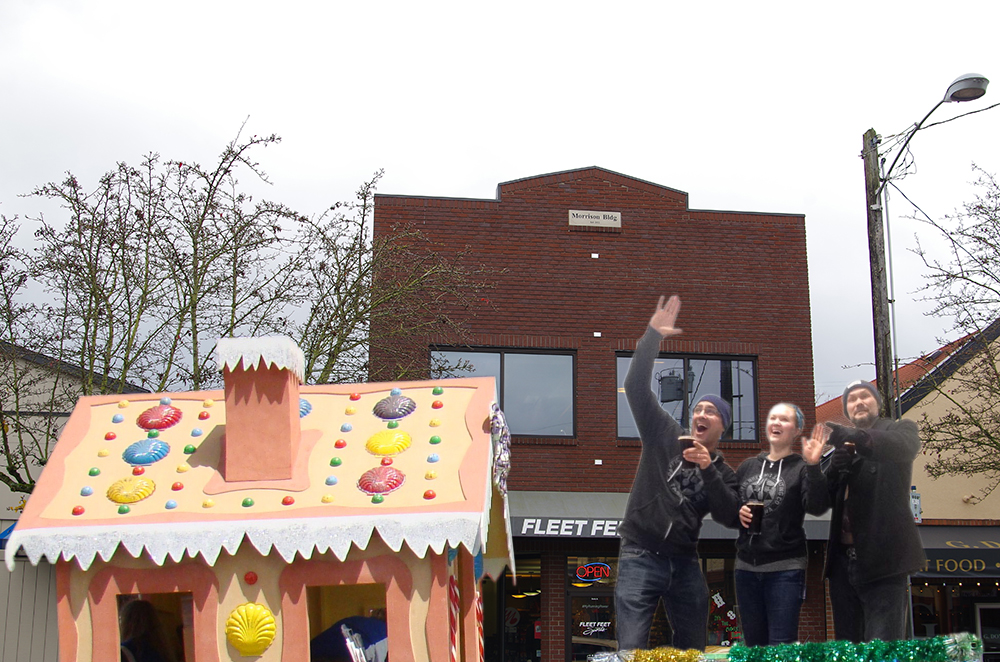 SWASEY: Behind 7 Seas are those wacky Pacific Brewing & Malting Co. folks. I can’t quite make our what beers they’re holding with all their dancing.

SWASEY: Riding a Mount Rainier themed float down 26th Street are Tim and Renee Rockey of M.T. Head Brewing Co. They brewed a Robust Porter out in the sticks of Graham. The aging in Heavenly Hills Whiskey Barrels sure brought out the coffee and vanilla flavors.

Behind the Rockeys is the Narrows Brewing team of head brewer Mike Davis and brewery manager Mary Asami. They’re performing the same jig that King Wenceslas performs on their Wenceslas Wheat Wine label, who braved harsh winters to bring ale to the famous Feast of St. Stephen.

SWASEY: The deep gold-colored Wenceles Wheat Wine hits the nose with citrus from Centennial and Citra hops, but the 50 percent wheat in the grist gives it a clean, smooth malt flavor. Centennial hops return with Amarillo in the boil. Well done Narrows.

BUDDY THE ELF: This parade seems too long.

SWASEY: They have been busy, um, otters. They just released three of their Blind Otters, also know as barleywines. One was aged in a bourbon barrel, one in a port barrel and the last in a cognac barrel. Friday in their taproom, they’ll release their Winterface spiced holiday ale made with cucumber, juniper, lavender, lemon and orange. On December 18, The Dark Side … of the Otter hits their taproom, a balanced Schwarzbier with a chewy texture and a firm, creamy, long-lasting head. Think of it as a dark lager, Buddy.

BUDDY THE ELF: I feel a disturbance in the Force.

BUDDY THE ELF: It’s just nice to meet another human that shares my affinity for elf culture. 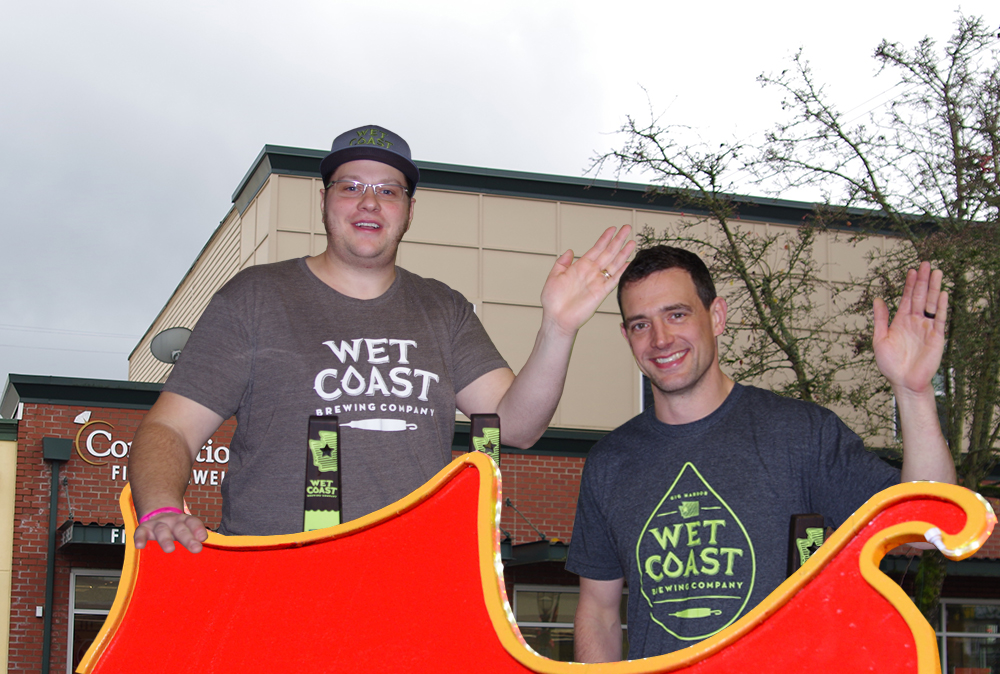 BUDDY THE ELF: Where is Engine House No. 9?

SWASEY: Well, they don’t have a winter warmer or Christmas beer per se, Buddy. But, the Tacoma brewery is in the middle of their annual 25 Days of Christmas celebration. Head brewer Shane Johns has handpicked some delicious big beers from AleSmith Brewing Co., Logsdon Farmhouse Ales, The Bruery and Jolly Pumpkin. You know, imperial stouts, barleywines and Belgian strong ales and such.

That big guy is Tristan Canty, a brewer at the Powerhouse Restaurant and Brewery in Puyallup. He’s holding a lightning bolt in one hand and their Winter Warmer in the other. It’s an easy drinking, 8.1 percent seasonal beer.

BUDDY THE ELF: How much looongeeer? …

BUDDY THE ELF: I think I hear Papa Elf calling me. So long everybody!