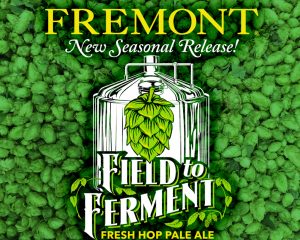 MORNING FOAM FOR MONDAY, SEPT. 5 2016: A seven-taster flight of craft beer and cider news, from the fluffy head all the way to the bottom thinker. …

Fremont Brewing has launch Field to Ferment Fresh Hop Pale Ale — a rotating lineup of four fresh hop beers throughout the month of September. The first release features the early hop harvest of Centennial hops from Carpenter Ranches in Yakima. This release will be followed by Simcoe, Citra and then finally Mosaic.

If you only have 48 hours in Portland – regularly cited as the city with the most breweries of any in the world — you’d better love beer. Because you’re going to drink a hell of a lot of it in a short amount of time.

As a celebration of 30 years in the business, Alaskan Brewing Co. is releasing a special 30th Anniversary Beer, Perseverance Ale.

Five hundred years ago, the German brewing purity law, or Reinheitsgebot, gave birth to the prominence of the German lager we’ve all come to know and love. Dogfish Head’s Sea Quench Ale honors that anniversary by simultaneously celebrating German brewing and ignoring that law. According to Dogfish hype, the beer is a “session sour quencher made with lime peel, black lime and sea salt. It’s a citrusy-tart union of three German styles of beer blissfully brewed into one.”

21st Amendment Brewery’s reborn oyster stout, Marooned on Hog Island, is deep rooted as a traditional style produced in England, where oysters are plentiful and there is not shortage of stout on that island nation.

The Brewers Association released its “2016 Mid-Year Beer Category and Craft Segment Review,” and according to the presentation, craft beer saw the highest growth at 9.4% increase in change versus the year’s average, bringing in an additional $120 million at mid-year to reach a whopping total of $1.4 billion in annual craft beer sales. FMB beer — or Flavored Malt Beverages — saw the largest increase of 18.6%. Click here to see the top 16 new beer brands.

A new video shows a Colorado brewery tour with an unexpected ending. A group set out to enjoy a few beers, but it turns out it was all part of a social experiment.