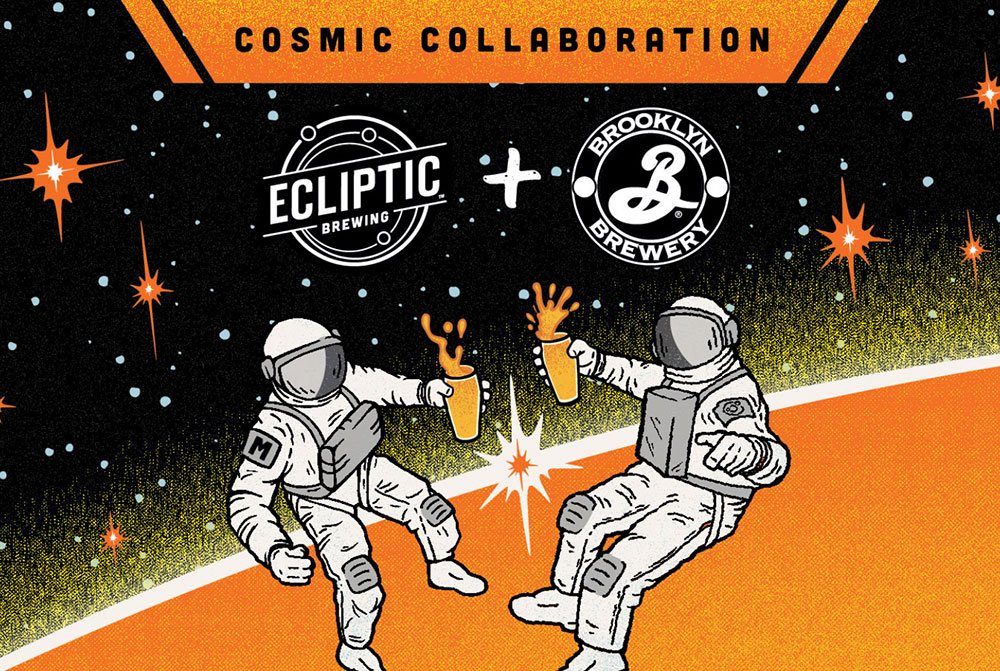 Back in early February when Peaks and Pints broke bread, or rather broke “Potato Paillasson, Smoked Sturgeon, Caviar,” during Ecliptic Brewing Co.’s “A Cosmic Brunch,” we pondered what to give the Portland brewery on their forthcoming fifth anniversary. If memory serves right, the first anniversary gift is paper, followed by cotton, lace, Grey Poupon and saxophones. Handing famed craft brewer John Harris a saxophone is weird; the man is steeped in Oregon’s rich craft brewing history. After beginning as a brewer at McMenamins’ breweries, he moved to Deschutes where he created the recipes for Mirror Pond, Black Butte Porter, Jubelale and Obsidian Stout. He spent the next 20 years of his career as a brewmaster at Full Sail in charge of creating the Brewmaster Reserve line of beers. In 2013, Harris founded Ecliptic Brewing purchasing the brewhouse from friend and Dogfish Head founder Sam Calagione. Clearly Peaks and Pints wasn’t thinking straight during that Ecliptic brunch. How could we when Brooklyn Brewery debonair Brewmaster Garrett Oliver leaned over the table to ask us how his Black Chocolate Stout paired with the goat cheese, candy cap mushroom ice cream and huckleberry crepe on our plate? We can’t remember if Oliver’s The Oxford Companion to Beer book, The Brewmaster’s Table book or 2014 James Beard Award for Excellent Wine, Beer or Spirits Professional fell out of his sports jacket when he leaned over.

In fact, Peaks and Pints is still not right in the head thinking about the Brooklyn Brewery and Ecliptic tap takeover going down Monday, April 1 inside our little lodge in Tacoma’s Proctor District. It’s true. Ecliptic picked Peaks and Pints to showcase their newest Cosmic Collaboration series, “5 Beers for 5 Years,” in which the Portland brewery collaborates with five other esteemed breweries to brew five celestial concoctions, then taking each collaboration on separate tours supported by tapped craft beer from both breweries. Brooklyn Brewery certainly didn’t tell famed Brewmaster Harris no; the two breweries brewed an amazing Tangerine Farmhouse Ale to kick off the first tour, which Peaks and Pints will host the Tacoma release party April 1.

As guests enjoy the bright tangerine and balanced farmhouse spice of the Ecliptic/Brooklyn Tangerine Farmhouse Ale, they’ll ponder their next pints from a draft list that includes Brooklyn’s Lager, Bel Air Sour, Sorachi Ace Saison and Black Chocolate Stout. Ecliptic’s Luna Kolsch and Starburst IPA will be icing on the fifth anniversary cake.

Yes, the remaining four “5 Beers for 5 Years” nights at Peaks and Pints this coming year will probably make your head explode, but let’s cross that orbit when it comes. Monday, April 1, let’s aim the telescope at two iconic brewmasters’ craft, plus color creations for prizes and finally toast Ecliptic’s fifth orbit around the sun.