Corvallis, Oregon, is a graceful, seductive, sophisticated and humane version of the platonic form of a small Northwest college town. It offers a kinder, gentler vision of hippie populism and liberal social planning: artsy trashcans covered in ivy, preserved frontier architecture, little cafes with outdoor seating and a general atmosphere of quaintly unified purpose. The college town is also home to some of the state’s best breweries and cideries. The idyllic little city of Corvallis, which sits snug against the Willamette River about an hour and a half south of Portland, is home to the state’s agricultural college, which also has a respected fermentation-sciences program. Oregon State University’s Fermentation Science program, one of just a handful in the nation, is a “hands-on” applied science addressing the use of microorganisms as processing agents in the production of alcoholic beverages, as well as a variety of other fermented foods such as cheese, yogurt, soy sauce, pickles, breads and fermented vegetables. Cheese is delicious, but so are craft beer and cider. Peaks and Pints presents Craft Crosscut 2.12.18: A Flight of Corvallis Oregon. 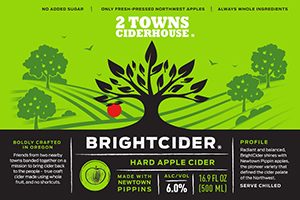 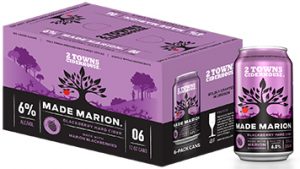 Block 15 Brewing sits heart of downtown Corvallis, only a few blocks from Oregon State University. The brewery’s name hails from Corvallis’ previous incarnation as Marysville and the old plat map location from the old town. In late 2011, homebrewers Nick and Kristen Arzner opened the brewery and restaurant serving beers true-to-style with ingredients imported from different parts of the world, along with all the Willamette Valley produced grains, hops, fruits, herbs and yeast. Blending delicate malt character and zesty hops, Gloria! is Block 15 Brewing Co.’s vision of the crisp, unfiltered pilsner. Brewed with floor-malted pilsner malts, it pours a hazy, straw-colored pint. Magnum, Hallertau, Oregon-grown Mt. Hood and Czech Saaz hops impart citrus, grass and floral spice, while Czech Pilsner yeast finishes clean and refreshing. Packaged after four weeks of cold lagering, this snapshot in flavor and aroma will last for a couple weeks, when stored cold. With extended cold storage, Gloria! mellows out to further balance these lively hop and yeast notes with its intricate malt backbone.