Craft Beer Crosscut 9.21.17: A Flight of Pumpkin and Coffee 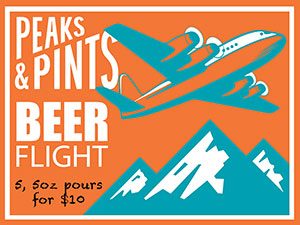 A gust of wind blows yellow leaves across Proctor Street today, driving home what we already know: It’s fall. Though the air hasn’t turned cold enough for heavy coats, the emerging autumn colors and shorter days mark the beginning of pumpkin spice latte season. Indeed, pumpkin spice is not a flavor; it’s a lifestyle. Its mantra is the crackle of fallen leaves and bonfires. “Sweater weather” is its holy creed. The pumpkin spice life, like its coffee, is sweet, and we are always #thankful for our #blessings. It is never really about that particular blend of cinnamon, clove, nutmeg, ginger and allspice, but how it makes us feel: warm, nostalgic, loved. Our backpack overflows with orange packaging for cereal, candy, cookies, tea, coffee, gluten-free frozen waffles, pasta sauce, cheese, paper towels and scented candles. We looked completely deranged. But, seriously, what’s better than coffee and pumpkin pie? How about a craft beer flight called Craft Beer Crosscut 9.21.17: A Flight of Pumpkin and Coffee? Yum. 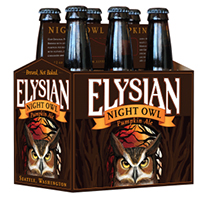 While most breweries have one or two pumpkin beers in the portfolio, Elysian Brewing Co. brews more than a dozen, including Dark O’ the Moon, Night Owl, The Gourdfather and Blight. Night Owl, brewed with more than 7 pounds of pumpkin per barrel, seven different malt varieties, green and roasted pumpkin seeds, bittered with Magnum hops and spiced in conditioning with nutmeg, clove, cinnamon, ginger and allspice, is their most lauded. It leans more toward Christmas than Halloween. Maraschino, banana-nut, cinnamon, pecan and graham cracker hit the tongue. Cinnamon dominates with some caramel and a touch of biscuit malt sweetness to support. The pumpkin love doesn’t end there — every year, Elysian also holds the Great Pumpkin Beer Festival (Sept. 29-30 at the Seattle Center), a celebration of 80 different gourd grogs, some of which are even served from giant pumpkin kegs with taps hammered right in the side. 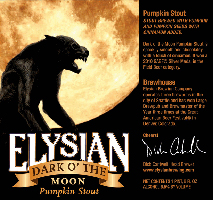 Elysian’s Dark ‘O The Moon is a straight-up pumpkin stout, a fusion of American-style stout and classic pumpkin spice ale influences. Sweet cinnamon dominates the nose in pleasant fashion, giving way on the palate to mild roast and brown sugar. Chocolate, coffee, tobacco and vanilla add to the flavor with a slightly bitter finish. Overall, the beer isn’t nearly so sweet as the aroma initially suggests, and it does a good job of asserting its “stoutness” without it overwhelming the supporting pie spice. It’s not the most complex of these beers in the spice department, but it does the cinnamon-heavy style well. 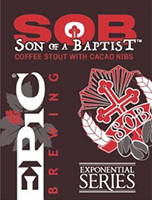 Son of a Baptist, as the beer is called, is an 8 percent ABV imperial coffee stout that is being brewed with more than 12 coffees from at least 12 different roasters, each one from a separate market across the country where Epic distributes its beers. The project was fueled by the public’s interest in Big Bad Baptist, Epic’s award-winning flagship imperial coffee stout that is aged in barrels. The pour is similar to Big Bad Baptist as it’s jet black. The aroma is pure coffee — didn’t get any chocolate scent in Son.  On the tongue expect some nice coffee notes, not overwhelming, chocolate and earthy with a big roasted finish. The aftertaste is smooth.