Fifty years ago this summer, New York City bar patrons of many genders, sexualities, and racial identities trapped a group of police officers inside the Stonewall Inn after they shut down the bar in yet another routine raid. Riots continued the following two nights as the LGBTQ community spread word that something unique was happening in Greenwich Village. Every June, Pride month, we celebrate their uprising with Pride parades that have come to resemble corporate advertisements rather than riots. It’s the time when lesbians, gays, bisexuals, transgenders, queer and questioning folk celebrate their heritage, continue and intensify their ongoing struggle for equal civil rights and look forward to a brighter future. And, few people know how to celebrate like LGBTQs know how to celebrate. Today, Peaks and Pints highlights breweries that brewed beers in the name of Pride via a beer flight we call Craft Beer Crosscut 6.8.19: Flight of Pride. Yes, it’s easy to understand how the true meaning of Pride sometimes gets lost in all the pizzazz of annual events like Tacoma’s Out in the Park (Tacoma celebrates Pride every July). Hell, Pride celebrations do mean good people watching; they do mean fun weekends — they can lead to delicious flights of beer. But, we need to remember why these celebrations are held. Pride events are opportunities for people to be out, to educate, and to be surrounded by a welcoming atmosphere. They are meant to build a safe, tolerant community where everybody is treated equally under the law. 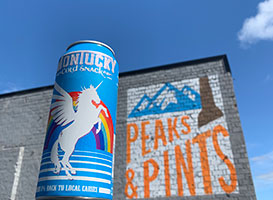 Montucky Cold Snacks is a canned premium lager, specifically geared toward light beer consumers in Montana. As opposed to the status quo of microbreweries in the state that focus on refinement and sophistication in beer, Montucky Cold Snacks aims to differentiate itself by focusing on and appealing to customers through crisp cold refreshment, pricing, and the celebration of Montana culture — and gay rights. You see, Montucky’s blue can featuring a white pony galloping across a sunset caught some eyes and people began mentioning how the pony resembles a unicorn and the sunset resembles a rainbow. People asked Montucky founders Jeremy Gregory and Chad Zeitner to redesign the can for Pride month a unicorn and rainbow. They did, and then some: 8 percent of profits go to LGBTQ organizations from the sale of these cans. 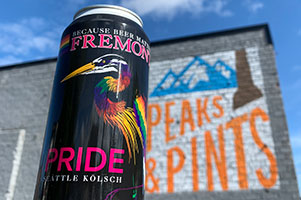 “Pride, it’s not just about the rainbows, unicorns, and glitter; it’s about celebrating queerness and standing up for the safety and self-determination of the LGBTQ community. Really, it’s all about love.” So states Fremont Brewing’s descriptor of their Pride Seattle Kölsch.  This celebratory Kölsch wraps a rainbow flag around the entire state via cans and draft. Net proceeds are donated to Seattle’s GSBA Scholarship Fund and Camp Ten Trees. In regards to the Kölsch, it’s a sessionable brew with Huell Melon and Loral hops for notes of biscuit, hay, light citrus and a touch of honey. 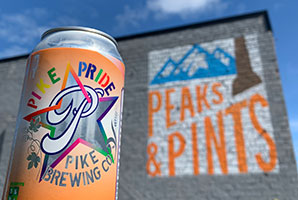 Proceeds from Pike Brewing’s Pike Pride Tangerine Pale benefit the Greater Seattle Business Association scholarship fund, which gives students the gift of education and works towards a future of equality. Brewed with Pilsner and Munch malts, as well as Mosaic, Eukanot and CTZ hops, the pale ale lives up to its name with juicy sweet tangerine flavor, plus notes of mango, citrus and a hint of pine. 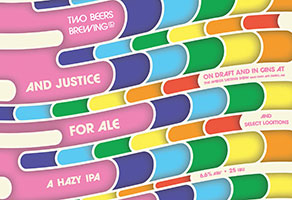 Two Beers And Justice For Ales

Two Beers Brewing take prides in their partnerships with LGBTQIA nonprofits and allies including: Three Dollar Bill Cinema, Entre Hermanos, Lifelong, Emerald City Mudhens, National Center for Transgender Equality, Seattle Pride, Planned Parenthood of Greater Washington and North Idaho, Seattle Symphony, A Sensible Theatre Co., and the Tacoma Rainbow Center. They’re proud of their LGBTQIA staff. And, they’re proud of their Pride-themed IPA, And Justice for Ales. The hazy IPA is brewed with Simcoe and Idaho 7 Cryo hops for a huge citrus nose, followed by more citrus on the tongue, plus tropical fruit and a hint of pine. 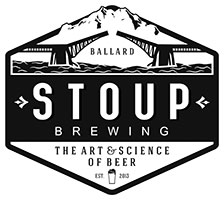 Stoup Brewing raises a glass of Rainbow Bubbles “to equality, compassion, and the incredible gift of loving people for who they are.” Rainbow Bubbles, the second IPA in Stoup Brewing’s Pride month series, doesn’t actually offer rainbow-colored bubbles, but it does offer a crushable IPA brewed with Hallertau Blanc and HBC 6340 hops. They keep the aromas of gooseberry, white grape and tropical fruit in check with a malt bill of wheat and Pilsner malt. Expect tropical flavors and a moderately dry, easy-drinking IPA.